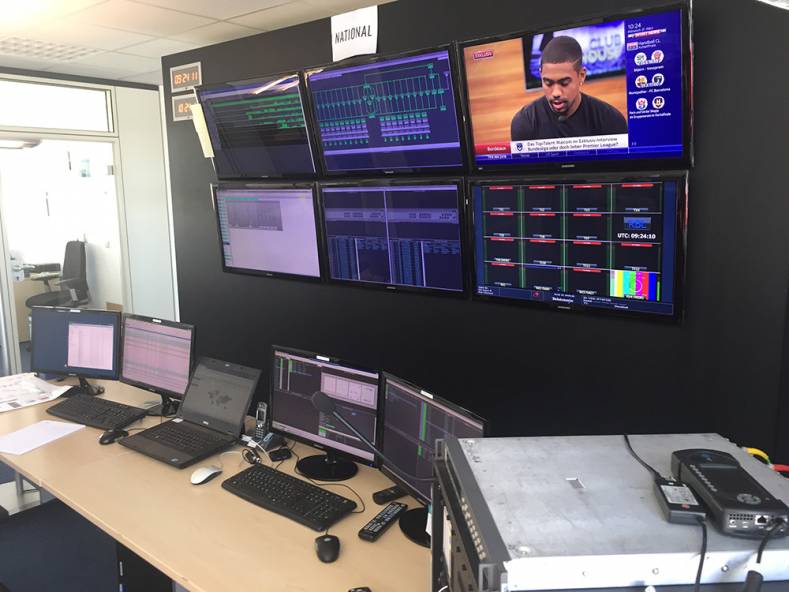 In 2017, global broadcast transmission services provider VIDI installed multiple Apantac Mi-16 Multiviewers to support live football (soccer) coverage in Germany. Those multiviewers now provide all the visual monitoring of the video transmission between on-site venues and the production center. The transmissions are also remotely monitored from the VIDI control center in Darmstadt (near Frankfurt), Germany.

Following this successful project, VIDI has once again chosen Apantac Mi-16 multiviewers to support the World Cup in Russia event this year. VIDI purchased a total of 72 Mi-16 multiviewer units, which are housed on pre-wired racks at each of the 12 remote on-location stadiums and at the International Broadcast Center (IBC).

The UHD signals at the remote sites are each encoded into four video streams via 2SI 3G links, with each link monitored by one Mi-16 input and connected to the IBC control center via a Telco fiber network where the rest of the transmission equipment resides and from where all signals will be received, distributed and controlled.

The Mi-16 multiviewer series accepts SD, HD and 3G-SDI (Level A & B) input signals, auto-detects the formats and provides passive input loops. The same hardware is also available via licenses as a Mi-16+, which is two 8 x 1 multiviewers in the same box, or a Mi-16#, which is a 16 x 2 multiviewer for sending any input to any output or both. All SDI embedded audio can be decoded and displayed, UMDs and other labels can be static or dynamic (TSL protocol) and complete Tally management (via GPI or TSL) is available.

Two analog and two digital clocks/counters as well as logos can be displayed. Markers, alarms and audio monitoring outputs are also available. Up to 30 different presets can be created, saved and recalled. Control is accomplished via GPI, a hardware and software panel or via the AXP protocol over IP and serial. All Mi-16 configuration is managed over IP using the Java-based JDirector application.