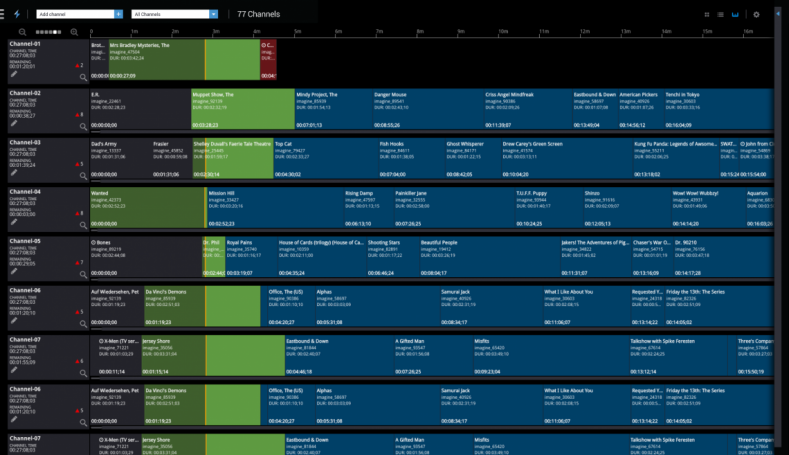 Technology and business are intertwined but many companies prefer to treat them as separate entities. Consequently, major equipment exhibitions such as the NAB Show are used to focus purely on technological issues, while corporate affairs are dealt with at other times. During this year’s Las Vegas expo, however, Imagine Communications made clear the two strands were interdependent by revealing that it has re-organised its operations into two defined divisions: one for playout and networking and another covering advertising distribution and management.

These two important market sectors have now been organised into distinct groups under the Imagine Communications umbrella, branded as Imagine Ad Tech and Imagine Playout and Networking Solutions. This business structure was instigated by newly arrived chief executive Tom Cotney, who took up the position on 2 December 2017. At the time of his arrival, Imagine Communications' technologies were aimed at four areas: Ad Management, Networking and Infrastructure, Playout and Distribution.

Cotney, who was previously CEO at the cloud-based mobile messaging operator Mblox and at one time general manager of the communications sector of IBM Global Services, says he reassessed Imagine's market focus over the Christmas holidays. "I was talking to the company's owners and said we didn't have any business pursuing the OTT distribution market," he comments. "The big content suppliers like Netflix already have an in-house solution for distribution and we were never going to win that battle. But we did have the dynamic ad insertion and packaging technologies so we decided to rethink those in terms of purpose."

The decision was taken to move those tools over to Ad Management, which ultimately created Imagine Ad Tech. There is the thought that inserting commercials into the broadcast transmission or streaming chain crosses over with playout. Cotney agrees it is all about putting together a schedule but says there are different characteristics between the two. "The key to dynamic ad insertion is being able to refresh the inventory," he explains. "If someone is watching a show on catch-up then whatever is being promoted should be up-to-date and not relate to when it originally went out. It's a different mind set, with a different group of decision makers, to playout and networking."

Cotney adds that is partly because playout is more highly automated, with clients looking for greater flexibility and lower operating costs for both it and master control. He admits that there was much discussion about how to compartmentalise Imagine's different business units, which did include considering coupling Ad Management with Playout and keeping Networking separate. "But in our analysis we thought Ads and Playout were too different," he says. "It's more elegant to sell integrated systems. And we would miss opportunities if people wanted to refresh their playout but not change the commercials set-up. And vice versa. You can still run a schedule on another playout system."

Glodina Connan-Lostanlen is senior vice president and general manager for Imagine Playout and Networking Solutions in the Americas. She observes that having the two individual units does not mean that clients do not have the chance to talk about how the ads system will work with playout. "The people who put these installations together, the systems integrators, have a best of breed approach," she says. "Deciding what is needed requires a level of focus and intensity and there is a slightly different culture between the two sectors."

The two new divisions operate under the same corporate structure, with Cotney as CEO across both businesses. Each has its own management team; Ad Tech is headed by senior vice president and general manager Sarah Foss, while Playout and Networking Solutions is overseen by president Steve Reynolds. Cotney comments that both divisions continue to be branded as Imagine because it is an identity nobody wanted to lose. "We also wanted to reinforce the point about focusing the business and emphasising that people are not just buying products, they are buying a solution," he says.

The use of the word 'solution' has rankled many in the broadcast technology trade press as it has become more prevalent in marketing-speak over the last ten or so years. Both Cotney and Connan-Lostanlen view its use in this context as legitimate. "A solution is in relation to a problem," explains Connan-Lostanlen. "That problem could be 'How do I migrate?' It is about the whole workaround and involves how customers work with systems and solutions."

Cotney adds, "A solution is not just that we have a playout product called Versio. We have to look at the future and what the roadmap is for next year. That also includes what the client needs, which might be more storage to extend the life of what they are using. Then they can plan to get a new product when it is available. There are financial pressures today. Customers do not have the resources they had before so we are looking to do business with people with a plan."

The future plans of many broadcasters and facilities are likely to include debates over the respective merits of virtualised and hardware-based playout technologies. Imagine continues to produce physical boxes for this sector but Cotney says virtual operations in conjunction with the cloud are being considered seriously within the company.

"They're definitely part of our long-term vision," he says. "The question is, what will the timeframe be? There are a couple of factors that play into this. The biggest of these is that we run a very dense real-time data stream. There are parallels with the IT sector. We are taking HD content, compiling it and then distributing it over a network. That's little different from airline reservations and banking. But I'm not going to notice any interruption to the data stream while I'm booking a ticket on the Delta Air Lines website. However, you do see an interruption on a broadcast stream and that is the last hurdle we have to get across."

Cotney says Imagine has to be prepared to go down the virtualisation path because its clients need to follow that route eventually. "We have to think about the future and that will involve thinking about partners," Cotney says. "Those would be people already in the virtual delivery business that might be interested in working with us. I believe the telcos around the world would be a good move for us on that point."

This clearly will be a major area of R&D for Imagine Playout and Networking Solutions in the coming years. The reorganisation of that division and Imagine Ad Tech - including the creation of dedicated sales teams for each - began in February and, observes Cotney, is due to continue until the end of the current quarter.