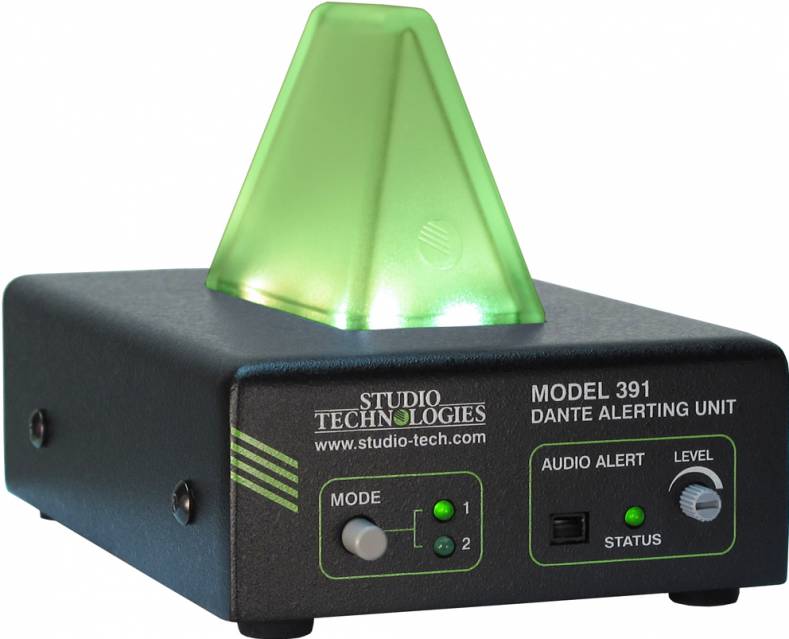 Audio over IP (AoIP) is being used to update and improve sound quality and networking capability in a number of broadcast applications, including intercom. Now that these two priorities are established, developers are looking at other implementations of AoIP, with Studio Technologies introducing a Dante-based alerting unit during the 2018 NAB Show.

Known for its announcer's console and broadcast modules, Studio Technologies also produces a range of intercom and interruptible foldback (IFB) products. More recently it has offered units based on Audinate's Dante audio over Ethernet technology, which involves IP as the transport carrier.

The Model 391 alerting unit is the latest addition to this range of products, which also includes intercom belt packs and headset connectors. The Model 391 allows operators to choose how to be alerted to the fact that they are being contacted, either visually or audibly. Visual indication is through a striking prism-shaped arrangement on top of the box, with a choice between red, green or blue LED illumination. The audible option relies on an integrated sounder or buzzer.

It is possible to use the desktop Model 391 with Dante connected belt packs and base stations, which support the light indication facility. The unit is configured by STcontroller software, which works on Windows operating systems from version 7 onwards. Its two audio inputs (receiver channels) are routed from any communications/audio source though Dante's control software app. The Model 391 works with Dante audio feeds at a sampling rate of 48kHz and bit-depth of up to 24. Physical connectivity is through a Power over Ethernet port.