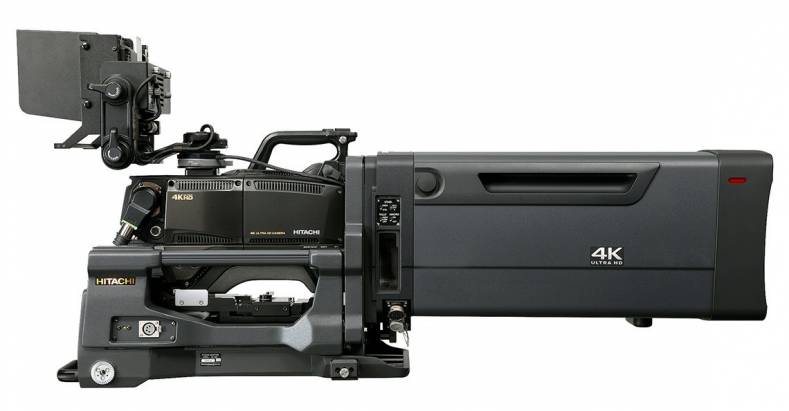 Hitachi Kokusai is releasing the CU-HD1300F-S1 HDTV camera control unit (CCU) with 4K, 12G-SDI output at the 2018 NAB Show. To facilitate the adoption of UHD by broadcasters and production companies at their own pace, the new CCU can transform 1080p to UHD with support for High Dynamic Range (HDR). The company is also unveiling a firmware option for SK-UHD4000 4K camera system to enhance simultaneous HDR and SDR acquisition.

The CU-HD1300F-S1builds on the features of the original CU-HD1300F, combining SMPTE fiber transport and multi-format HDTV support with intercom, teleprompter return, and additional signal connectivity in a 2RU unit. The CU-HD1300F-S1can output natively-acquired 1080p video as 4K/UHD over single-link 12Gbps SDI or quad-link 3G-SDI connectivity.

The 4K output functionality of the CU-HD1300F-S1 is compatible with all fiber-equipped, 1080p HITACHI Z-series and SK-series cameras, and supports HDR when used with HDR-enabled camera models including the Z-HD5500 and the SK-HD1300. The new CCU can also be used with interlaced Hitachi camera models for HDTV output.

A second, new CCU, the dual-cable CU-HD1300FT-S1fiber/triaxmodel, offers similar 4K output capabilities when used with fiber-connected cameras. The CU-HD1300FT-S1offers all of the capabilities of its fiber-only sibling, plus Hitachi’s fourth generation digital triax system for long-distance triax transport of HDTV signals.

Like the transition from HD to 4K, the path from SDR to HDR has its own challenges for content producers, requiring them create separate outputs for optimal viewing across different generations of displays. The new firmware option for the SK-UHD4000 camera system allows separate video shading adjustments for HDR and SDR outputs, enabling users to select from multiple HDR profiles alongside SDR simultaneously with the same camera.