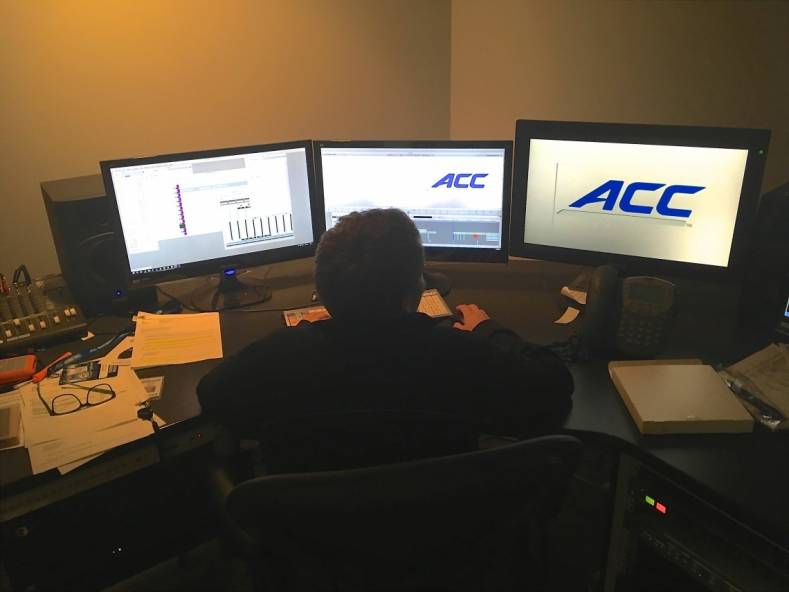 The hoops are going to be blazing starting Tuesday, March 6th,, as the Atlantic Coast Conference men's basketball tournament gets under way at Barclays Center in Brooklyn, NY.

This year, as it has every year since it was founded by Rick and Dee Ray in 1979, the broadcast of the ACC will be produced by Raycom Sports, headquartered in Charlotte, North Carolina.

Editor and coordinating producer Alex Farmartino was good enough to take time away from his hectic prep just days before the first jump ball before the ACC championships to indulge in an interview with me about their Avid-based post production process.

With 10 Media Composer edit bays under his command, Farmentino’s post production crew is kept busy creating elements for Raycom’s 160 nationally syndicated football and basketball games each year in addition to a full boat of original Emmy-winning sports programming such as "Football Saturdays”, "Forging History: Road to an ACC Championship” and “A Cut Above”, which delves into New York’s ties to the ACC.

“We have an ISIS 5000 with 80 terabytes of storage, two Maxon Cinema 4D graphics stations, two Airstream Multiplay servers, an Interplay media asset management system, and 10 Media Composers with the Symphony finishing option,” he detailed for me. “We’re about to acquire some of the new FastServe next gen servers and I think there is even an old Unity storage system around somewhere.”

For the ACC championship they will be ingesting from EVS drives in the two remote trucks Raycom Sports owns. They will come in through an IPDirector content management system into the ISIS storage.

“Through Avid’s Interplay Web Services we are able to do check-in of the physical files into ISIS and the metadata from the EVS can migrate all the way into our Interplay database,” he explained. “So for the user, all you have to do is hit ‘Send to ISIS’ and a file appears bringing the material from the truck back to the edit bays in our home office.”

Programs are finished in the Symphony system.

“We may not have the grading capabilities of Hollywood studios, but our guys have pretty good eyes,” Farmartino said, “and Symphony has enough handles to give us color control we need, especially when you are shooting S-Log.”

S-Log is Sony’s version of Log gamma that lets a camera capture a much greater dynamic range. Raycom Sports utilizes Sony F5, FS7 and A7S for most of its sports productions, recording 1080i video. They then transcode the footage to DNxHD 145 or XDCAM 50 for most editing, then deliver in 1080i.

Farmartino checked the timeline of the project he was working on while we were speaking, and reported, “I’ve got DNxHD, XDCAM, 1080i and 720p all mixed together and it all plays put just great,” he said. “In fact, I’m just about to send it over to our digital archives.” 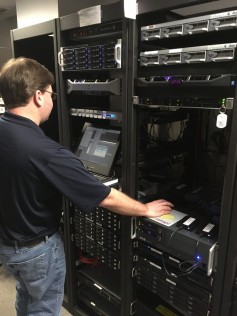 “I have to wear a lot of hats around here,” he told me, “and a lot of times if you have 6 different products in play you run into a ‘he said, she said’ situation. But with Avid, I can just call them and get things fixed. The example I give a bunch is the time I had to call them after a major power hit at 11:30 AM and we stayed on the phone until 4:30 the next morning to rebuild the engine inside our Interplay. It was a worst case scenario, but to give them credit they stuck with it until the situation was fixed.”

The operation at Raycom Sports is unique in many ways. Partially due to the fact that in the Raleigh-Durham market they serve 12% of the households have neither cable nor satellite, their ACC Network is the last over-the-air regional sports network in the entire country. Including broadcasters outside of their geographic footprint, the ACC Network is seen on 90 different stations and reaches 54% of U.S. households.

“Almost everything we take up to Brooklyn for the live ACC tournament broadcast originates down here in Charlotte,” Farmartino said. “But the game coverage itself comes out of our remote facilities up there. I hope you get a chance to see the spectacular opening we cut for the tournament on our Media Composers to a song by Imagine Dragons. I’m hoping it ends up on You Tube.