FOR-A’s newest switcher, the 12G-SDI supported HVS-6000, will make its show debut. The latest in FOR-A’s line of HANABI switchers, the HVS-6000 offers 4K support, maximum 48 input / 24 output in 12G, and scalability to users looking to transition to 8K further down the line.

The 2 M/E HVS-6000 offers frame synchronization, frame buffer, 3D DVE, and 4 keyers per M/E with DVE function + 4 DSK’s. The solution will be shown in the booth’s video switcher area alongside its existing 4K supported units, including the powerful HVS-2000, which offers the performance of a 7 M/E switcher.

In its 12G/IP technology area, FOR-A will showcase its entire USF-Series of universal systems frames and introduce the USF-106UDC-12G 4K up/down converter – which offers Interlace/Progressive and up/down conversion for a range of signals from SD and HD to 4K.

Other new solutions in this area will include the MFR-6000 SD/HD/3G/6G/12G router with a matrix of up to 144 x 144 and MBP-1000VS-12G/IP 4K video server - which offers multi-input/output 4K and HD support and ingest, playout and 4K recording functionality. 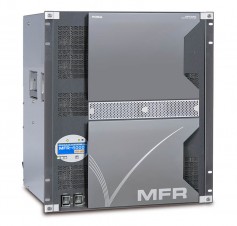 In its virtual system area, look for demos of the VRCAM-NX sensor-less virtual studio system and Brainstorm Infinity Set advanced virtual system. The FVW-700-4K 4K/HD telestrator will also be showcased in this area.