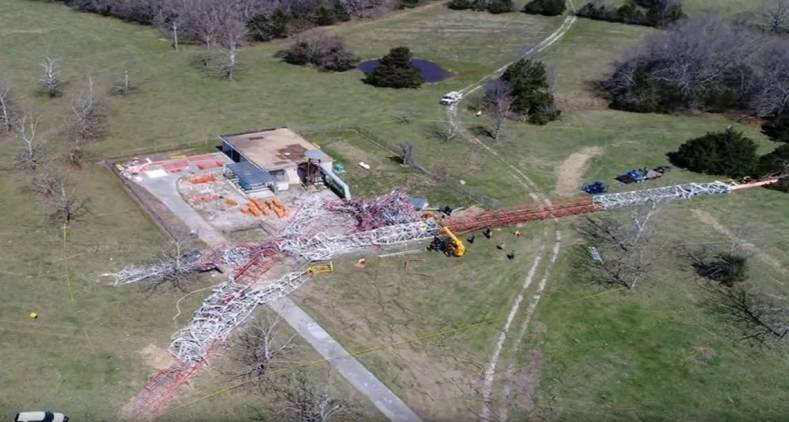 The KOZK tower failed on the morning of the first day of Rev G structural upgrade work. Photo courtesy 417 Drone.

You may have recently seen the story about the 1950’ PBS tower that collapsed near Fordland MO. This story is not so much about what happened that May morning in Fordland, but more about what it means to an industry built on old TV towers. The deadly result should serve as a warning to all as the repack unfolds.

Tall TV towers are unique to the industry. If a TV tower falls, it makes the news. TV towers rarely fail, but when one does, it's usually related to weather conditions. Seldom is a catastrophic tower failure caused by accident while an experienced crew is at work on it, but that appears to be what happened early in Phase 1 of the FCC Repack, in the Springfield MO Market #75. The event marks the first casualty, and death, attributable to repack.

The tower was in the Fordland MO area, where the AGL is about 300’ above the city of Springfield. Sprinkled across a relatively small area north of Fordland are most of Springfield’s TV and FM transmitters. Several near-2000’ towers in the area help broadcasters overcome much of the signal shadowing behind the market’s Ozark hills. 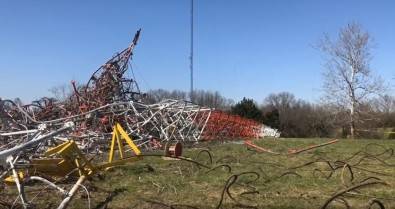 The top few hundred feet of the tower fell to one side. Picture courtesy KYTV.

The Fordland tower catastrophe was in the boondocks. Imagine the scope of horror and outrage if an urban TV tower collapsed under similar circumstances.

In many markets, TV towers in the 1000' range have been standing inside populated urban areas for decades. Many of those towers will require ANSI/TIA Revision G (Rev G) upgrades, similar to what was happening in Fordland.

It is not that unusual to spend $1 million on a Rev G upgrade. Any tower work is risky and serious. Rev G upgrades can be the most extensive, expensive, and as we've now seen, dangerous. The bulk of tall TV tower Rev G upgrade work is just starting in Phase 1 markets.

At the recent NAB Show, I asked RF equipment manufacturers about their vision of how the repack will stay on schedule through July 2020. Most were guardedly less than optimistic. Nearly everyone agreed the most critical factor is the limited number of experienced TV tower crews qualified to do the requisite work.

Work for many qualified TV tower-work contractors has been a bit slow over the past few years as many stations were anticipating and planning for repack. Now that repack is in progress and everyone knows their FCC deadlines, most qualified TV tower crews are swamped and tightly scheduled. One result is that there is little time for the crews to rest between projects for the next 50 months. Critical rest risks are a danger variable destined to increase with time.

Tower work is not only risky and dangerous, it’s seriously physically demanding. Nobody wants a tired crew working on their tower, but how can it be avoided without relaxing the FCC deadlines? The number of experienced TV tower crews isn't growing.

Also looming large on the horizon is the law. If stations don’t abandon their old channels in compliance with the FCC schedule, they will be at risk with the FCC and with the company that bought the frequency in the spectrum auction. 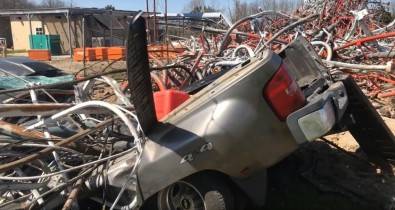 Everything in the path of falling steel was crushed. Picture courtesy KYTV.

Like TV towers that populate many markets, most of the Fordland towers were erected in the 60s, 70s and 80s. The tower that fell was built in 1968. Many similarly-aged towers across the county are scheduled for Rev G upgrades to accommodate repack changes.

Approximately 900 US TV stations are repacking. Many will require updating towers to Rev G first. Can every TV tower be successfully be upgraded to Rev G, or later to Rev H? At what point is it more practical to replace a tower than bring up to Rev G or H?

Is your station concerned that its tower may be too old to be successfully upgraded to Rev G? That’s the here-and-now question that just became profoundly more significant with this recent Rev G upgrade tower collapse.

A nearby witness said it sounded like a slow-motion car crash magnified by 100, and local TV stations reported the noise was heard for miles. As you might imagine, the accident is the talk of the town in the Springfield TV engineering community.

The tower and antenna transmitted the KOZK signal and is owned by Missouri State University. KOZK is the local PBS affiliate. M. Suzanne Shaw, Marketing and Communications VP at MSU provided the following informations:

The 47 year-old tower was donated to the university in 2001 by a local commercial TV broadcaster. “The work being done when the collapse took place was the addition of structural support required to accommodate equipment needed for the channel repack,” she said.

When the tower fell at 9:30 A.M. the weather conditions were “sunny, cool, a little wind.” 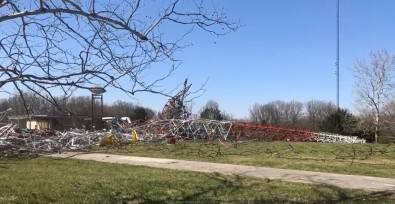 Fortunately, the transmitter building and engineer inside were spared. Picture courtesy KYTV.

“The crew members on the tower were from Steve Lemay LLC. They were a sub-contractor brought in by TCI (Towers Construction, Inc.), the company that won the bid for the work. The crew had arrived earlier in the week and had been on the tower installing safety equipment before beginning the structural reinforcement process,” Shaw said. “They had just begun installing structural reinforcements that morning.” The crew was scheduled to be working on the tower for at least the next 3 months. Word among local TV engineers is that the crew was replacing a cross-member when the collapse began.

Steve Lemay LLC from Blaine, WA was the subcontractor. Steve Lemay was a 25-year TV tower veteran who died in the accident. At the time, the 6-man crew was working about 105 feet above the ground. The five other crew members on the tower were not seriously injured.

Free fall from 2000’ would take about 11 seconds. Local TV engineers report that from the moment of the first noise, the tower took about 90 seconds to crumple and impact the ground. One local TV engineer happened to be inside the KOZK transmitter building next to the tower when it fell. He dove under a desk when he heard the first noises, escaping injury only because the most serious damage occurred outside the transmitter building.

The work was not to accommodate a new antenna. KOZK had already installed a wide-band antenna in anticipation of repack from Channel 23 to Channel 16. The tower was being brought up to Rev G specifications to hang new feedline for the existing wide-band antenna. Following the collapse, KOZK moved to a temporary transmitting antenna atop a building on the Missouri State University campus in Springfield.