Subcommittees and Specialist Groups are working on these and other elements to bring the ATSC 3.0 standards all into one.

This Part 2 segment of the latest ATSC 3.0 story is based on the June 16th webinar hosted by SMPTE and the Advanced Television Systems Committee (ATSC). The webinar was presented by Dave Siegler, Cox Media Group VP of Technical Operations. Our review of Part 1 of tutorial webinar series can be found at here at The Broadcast Bridge.

The future of television is evolving and changing, and will it continue to do so with or without broadcasters. Much of the change has to do with mobile devices, viewer habits and the internet.

But, there's not much more ATSC 1.0 can do. Main Profile @ High Level ([email protected]) MPEG2 is maxed out and inefficient by today's measures such as HEVC. Television is starting to feel old. It needs to change.

People are on the go and they want content everywhere. People want mobile TV, better audio, higher resolution images. Yet spectrum is becoming increasingly scarce. Fortunately, new compression technology such as HEVC has significantly improved since MPEG2, so we now have some options.

Video paths other than broadcast are common. There’s also a demand for better audience measurement data. As technology moves faster and faster, broadcasters need to not just catch up, but surpass it.

Think of the ATSC 3.0 platform as a two-way interactive platform for mobile and home. It merges the capabilities of over-the-air broadcasting with the internet.

The ATSC 3.0 timeline clock is ticking.

ATSC has stated several goals for 3.0. Topping the list is “To improve the television viewing experience.” Second is “To add value to broadcasting’s service platform,” by extending reach, adding possible new business models, providing higher quality audio and video, and more accessibility with personalization and interactivity. The last but certainly not the least goal is “To address changing consumer behavior and preferences,” by providing TV content on all devices, fixed and mobile.

The 3.0 standard leverages the power of broadcasting and the internet for more flexible and efficient use of the spectrum. 3.0 taps new advances for a complete new system with potential for a standard adopted widely around the world.

For broadcasters, ATSC 3.0 provides flexibility with expanded service offerings and coverage areas that can be customized to terrain. The system provides a robust RF link with different transmission and reception environments for mobile and pedestrian viewers, and it provides efficiency with a physical layer that can evolve over time.

Interactive capabilities are supported by ATSC 3.0 because supports a two-way path. The platform includes synchronized multi-screen applications, with data sharing between devices, and it can turn any touch-enabled device into a track-pad for television. Because 3.0 is still in it’s infancy, a lot of its capabilities remain conceptual. The final uses for interactivity will be driven by demand, experience, and ultimately by its sponsors. 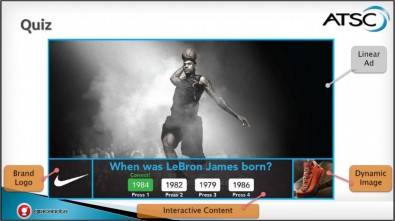 An example of a trivia quiz where viewers could answer the questions with their remote or a second-screen device.

In this interactive application example, a viewer quiz, all the elements are contained within layers. The various graphics are all occupy different layers. Viewer preferences are a layer. The quiz may pop up because the viewer prefers quizzes while watching ads. In this case, the viewer could might earn reward coupons or accumulate reward points for food, product or services prize coupons.

Polling and poll results could work similarly but without the prizes. Polling provides another method of viewer engagement and applicable to multiple local content types such as news, sports, weather and local events. Participating local users can answer an opinion poll related to current news stories and activities.

Unlike quizzes, polls aggregate the responses and can display results immediately or delayed by a pre-determined time. In an ad for example, polling could be used as a sentiment meter where viewers register their opinions on the relevance and tone of an ad. The immediate feedback and measurable proof of performance might help keep sponsors engaged and happy. 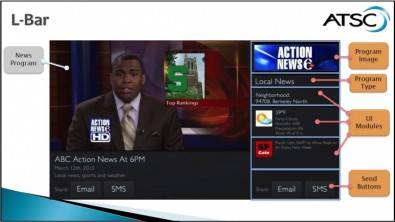 Until 3.0, graphics were integrated into program content and therefore impossible to customize for individual viewers.

In ATSC 3.0, all graphics are dynamic, layered, pushed over broadcast and/or broadband, and stored locally. Viewers can easily control their viewing experience with preferences. GPS tells the system the geographic location of the viewer, so relevant neighborhood information can share the screen with a local newscast, for example. Storing graphics, clips and some spots locally saves bandwidth and allows viewers to customize their screen with information that uniquely interests them.

There are countless ideas for interactive sports applications. One of the more obvious is the instant replay. The 3.0 cache can work like a DVR for live instant replays. 3.0 has a store-and-forward component where info can be sent ahead, cached and played back later.

One example would be later playback of highlights from an earlier, live televised event. This could be automatically accomplished with user profile settings or viewing history. Like the internet, the more a viewer watches and enters personal preferences into the system the more customized the content delivered to that specific screen can be.

There are many examples of advertising with immediately measurable results. Customized home shopping would be a natural, attracting new viewers by presenting products and services in which the viewer has expressed an interest. Without a working market to measure until 3.0 goes live, nearly everything is conceptual. 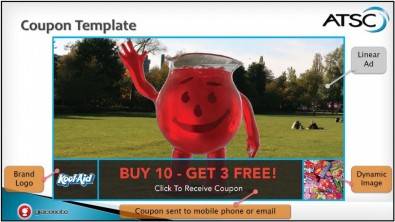 One idea that seems to have commercial appeal is the electronic coupon.

If a viewer sees an advertisement of interest, a coupon template might combine a linear ad with an electronic coupon that is automatically delivered to a mobile phone or email address. It could happen live through viewer request or automatically based on preferences, history or even zip code.

Electronic coupons are measurable, trackable, and can provide immediate feedback to the advertiser. They’re electronic and don’t necessarily need to be printed.

Another idea is social media integration that lets viewers like or tweet while watching a show. A station could add a couple of logos and leverage this into revenue.

Shows produced for multi-screen apps can show real-time information about the on screen actors. For example, making clothing and accessories worn by characters available for purchase. Other ideas suggested include providing extra content, like a director's commentary, which is available on some DVDs. A mobile app could synchronize a second screen to a Blu-ray playback, for example, or games could be spread across multiple screens. 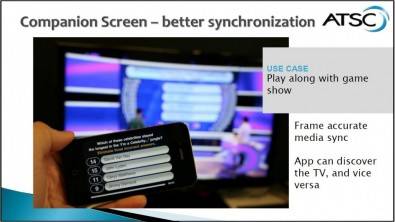 Companion screens and additional and optional content enable viewers to customize their own media experience.

The companion screen mobile app idea is particularly interesting. An app could discover the TV and vice versa, automatically creating a second-screen experience. It would allow viewers to take advantage of unique second screen features and special content without disturbing others watching the show. One example would be an individual in a group wanting to listen privately in a different language, or wanting to hear the audio description.

Companion content is expanded content about a news, weather, traffic or sports story. Graphic elements allow the viewer to “drill down” into a particular story of interest. While some might say this would require more work, others might reply that the function affords stations an opportunity to monetize content that is already recorded, but might never be aired.

Another idea focuses on traffic information. It might provide a live look at traffic along a particular route. Similarly, a weather widget could display weather radar, current stats and forecast graphics while promoting station meteorologists. With the location-based feature, a weather ap on a notebook or smart phone could follow the viewer to other cities, updating information as the person moves.

As you may have noticed, there appears to be no shortage of concepts, ideas and interactive trial balloons being floated, and who knows what may become popular with viewers. As the standard moves closer to reality, excitement is building. Its interactivity could certainly give creative people more tools to develop more commercial centric and viewer specific products--all of which can be sponsored.

ATSC 3.0 certainly looks to be the best investment for broadcasters to increase revenue by supporting new ideas. It’s not just about 4K UHD although 3.0 supports it. It’s about brand loyalty and stations blending with the internet to create new local sponsorship opportunities. It positions broadcasters for the future.

Behind the scenes, where the antenna hits the atmosphere, ATSC 3.0 represents an unknown. Engineering, (the reality department) has no map or plan for the RF transmission leap from 1.0 to 3.0. All we engineers know is that the formats are incompatible and that means a lot of viewer's TV sets will go dark without proper planning.

Some potential solutions have been offered, like using ATSC 1.0 market lighthouse stations as a mid-step. Such cooperation could result in broadcast TV’s greatest compatibility test ever between local broadcasters. But, who wants to be a lighthouse for cheapskates and geezers? What TV broadcasters need right now is a realistic transition plan that fits today’s competitive high-tech digital media marketplace. Bottom line, everyone needs to be positively involved with the transition.

Our next article on the SMPTE - ATSC seminar will replay the technical information presented by Skip Pizzi, NAB Senior Director of New Media Technologies.