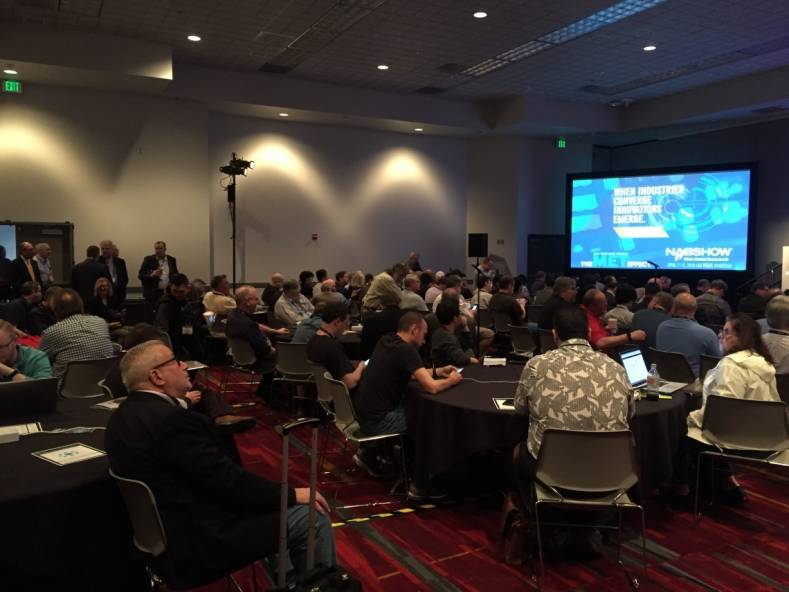 The day after the 2018 NAB Show closed was the one-year anniversary of the beginning of the FCC Spectrum Repack for all phases. Following the show, we asked the ‘big 4’ TV transmitter manufacturers,GatesAir, Hitachi Comark, Rohde & Schwarz and Thomson Broadcast for their thoughts on where things stand in this most important broadcast transition.

What is your impression of this NAB compared to previous shows?

GatesAir: Last year, everyone said it was happening. This year, people have placed orders, some have taken delivery and some are working on their orders. What ifs have turned to this is what we’re doing.

Hitachi Comark: Overall show traffic was down compared to 2017. However, the right customers and prospects were in our booth. We didn’t see a lot of “tire-kickers” this year and overall, we were very pleased with the customer turnout in the Hitachi-Comark booth.

Rohde & Schwarz: The overall traffic was outstanding this year, and the number of leads generated throughout this year’s NAB was record breaking compared to previous shows.

Thomson Broadcast: We witnessed an increase in interested broadcasters who were asking for more detailed explanations on our ATSC product line and the questions were direct and to the point – meaning clients know what they want and are hunting for the right product for their immediate repack needs. In past years, we would have visitors stop by more so to check out the latest technology on the market.

In terms of TV, what exactly were your exhibit visitors looking at or for?

GA: Now, everyone knows their channel assignment and deadline. People were further along and had specific questions. More than a few were considering upsizing their transmitters for the vertical component.

RS: The Rohde & Schwarz TV Transmitters attracted the majority of visitors at our booth, but video servers, Monitoring / Streaming and Storage gained a great amount of attention as well.

TB: We did not experience specific ATSC standard questions as much as we experienced questions regarding the availability of equipment. The annual NAB show is still by far the event of the year for broadcasters and industrial suppliers, despite the low turnout this year compared to 2017. 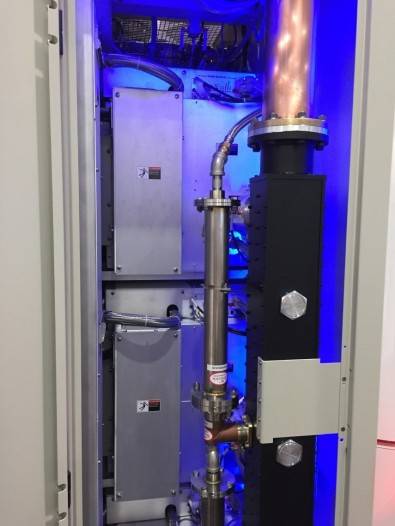 The business side of a liquid cooled GatesAir Maxiva. The dramatic blue lighting option is unfortunately only for effect and not an available option.

Are individual station plans for repack as timely and thorough as expected?

GA: Yes, as is GatesAir, and we have some reserve capacity for those who haven’t ordered yet. Some ancillary gear such as RF switches and dummy loads are starting to drag out a bit, and some stations have needed to change brands on some of that gear to meet their deadlines.

HC: Yes and no. Some customers are still wrestling with the licensed repack ERP versus a maximized ERP. Since maximization affects the entire RF plant (TX PA sizing, TX line and the antenna), it has delayed some customers from placing timely orders.

RS: Yes, for the most part individual stations have been timely and thorough as expected.

Are there repack questions stations are ignoring or forgetting to address, such as ATSC 3.0 headroom or dual polarization?

GA: Most people seem up to speed. Some stations are acting alone, others rely on centralized decisions made by their group.

HC: Our DTV exciter technology and associated transmitters are all ATSC 3.0 ready. Our new CDS encoder solution (used for the ATSC 3.0 demo) is perfectly suited for deployment in ATSC 1.0 today, with a simple upgrade path to ATSC 3.0 whenever customers are ready.

RS: We have seen a great amount of repack planning from our customers. We don’t see any issues with stations forgetting to address any questions or steps since we have partnered with a Services Group, which handles the site surveys and drawings, and also works closely with broadcasters on a step by step installation plan.

TB: Some stations are more focused on securing equipment for the repack and perhaps less inclined to focus on ATSC 3.0 since there is no current deadline for the complete ATSC roll out. People know what they want and are hunting for the right product for their immediate repack needs. We expect the detailed ATSC 3.0 questions to come later.

What do you think the biggest repack issues are or will be?

GA: Long to-do lists. Electricians installing circuits and wiring ready for a new transmitter can be a top issue. There is a surprising amount of analog gear left in place. Sometimes, freeing up space is a big issue.

HC: Inevitably there will be delays in the process due to unforeseen issues such as weather, tower work, and other potential logistical challenges not modeled in the original time table. Lead-times for certain products have increased due to the spike in volume associated with repack.

TB: The demands for transmitters are more significant than were initially expected.

Some states in the US pose a challenge when it comes to the geographical location of stations. Those under brutal weather conditions six months out of the year create tight working schedules and timeframes for installations. Natural disasters can also take a toll on respecting a timeline.

This is a cyclical business and its been about 10 years since the last repack took place and tower manufacturing crews and businesses that were around back then are no longer around. This is a factor that strains tower crews and creates a very high demand in labor in such a short time frame. 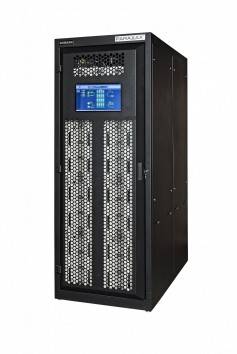 The 16 PAs in this Hitachi Comark Parallax are capable of 27.5kW TPO.

Do you think repack will bring new co-channel interference problems with ATSC 1?

RS: At this point in time, I don’t think that there will be any co-channel interference. The chief engineers have done an outstanding job of analyzing the current situation.

Your impression of other aspects of repack that may delay work towards deadlines, such as shortages of raw materials, Rev G tower improvements, increasing tower weight loads, overworked tower crews, etc?

GA: Lead times are going up on materials, and the uptick in the auto industry has pinched the electronic supply chain. Devices like microprocessors compete for attention.

HC: There are issues with site preparations, building access and space requirements, coordination of equipment removal (NTSC rigs in some cases), tower issues, etc. No two broadcast sites are identical.

RS: Our biggest concern is the tower crews due to the limited amount of teams that are trained to manage this particular area. We, however, have no concerns when it comes to raw materials or manufacturing capacities at our factories since 98% of parts are manufactured in-house.

TB: We find that it is best to be cautious or prudent when it comes to these projects, as we will have to face a lot of unexpected setbacks. What we can say today is that Phase I and II are delayed and therefore making it difficult, at least in our deployment experiences, to follow an imposed scheduled plan by local authorities.

GA: Most are at the same site.

HC: The existing fleet of transmitter equipment is well past its prime. Some customers can’t wait to turn off their old rig in favor of new technology.

RS: About 60% of broadcast stations are changing their locations.

TB: We have no relevant data.

How and what do you predict we will be reporting about repack progress this time next year during Phase 3-4.

GA: The further we move along, the more visible issues will become. We know there will be some challenges and will take them as they come.

HC: A lot will be learned over the next 12 months.Broadcasters in the early phases are essentially the early adopters of repack.

RS: For the most part, we believe the majority of stations will be on schedule. However there’s always possibilities for delays.

TB: If we refer to the last repack that brought us from analog to digital, the previewed time was initially 3 to 4 years, and it took 10 years.

What do you think are the chances of all phases including Phase 10 being complete by July 3, 2020?

GA: The optimist says yes. The realist says this is a complex program and it is unlikely. It won’t be for a lack of effort, beyond anyone’s control.

HC: I think everyone agrees that the 39-month repack schedule is extremely aggressive. We are going to do whatever it takes to ensure that we don’t cause delays ensuring our repack projects are completed on budget and on time. However, I wouldn’t be surprised to see the industry requesting some sort of relief from the FCC on the repack time table as it exists today.

RS: I believe that most of the Broadcasters will be completed by 2020.

TB: They didn’t know it was impossible, so they did it. – Mark Twain

The Rohde & Schwarz TLU9 transmitter is designed to fill in main signal gaps and shadows.