As broadcast and production facilities move to IP-centric networks, engineers are faced with installing and maintaining new, and perhaps unfamiliar, equipment. And when the system integrator or equipment vendor leaves, it’s up to the facility engineers to keep everything operating. Welcome to the new world of IP networks.

Migration towards ST 2110 and ST 2022-6 video networks for production and content delivery is picking up pace, as the advantages of IP versus traditional ‘SDI over coaxial cable’ carriage become more evident. The key drivers of IP include the economies of scale and speed of technology development that stem from the use of Commercial-off-the-Shelf (COTS) IT equipment, along with the introduction of more flexible and scalable business models based on virtualization and cloud technologies.

However, this migration to IP video networks does present significant technical challenges for broadcast engineers. ‘SDI over coaxial cable’ was designed as a dedicated link for synchronous, point-to-point delivery of constant, high bitrate video. In contrast, IP infrastructures are typically asynchronous in nature, and this can present major issues for real-time video delivery, due to the occurrence of network congestion, latency, and jitter. To address these issues, there’s a real need for new types of IP signal generation, analysis and monitoring tools to diagnose operational video network issues, and stress test broadcast systems in advance.

To achieve a high Quality of Service (QoS) with IP video, the network traffic flow should avoid excessive peaks that can cause over-flowing of switch buffers. In reality, the inherent burstiness of IP networks plus bandwidth constraints can result in unmanaged traffic levels. Such issues create packet congestion and latency as router ports become blocked due to buffer exhaustion. This type of packet congestion is often exacerbated in multi-hop infrastructures, with the different paths taken by signals potentially causing further variations in network latency.

These sources of network congestion and latency will delay the arrival of video packets and potentially lead to significant jitter problems. In general terms, jitter is a deviation in signal periodicity. In the case of an IP video signal, jitter is a deviation from the expected packet arrival periodicity. Excessive deviations in Packet Interval Time (PIT) — also known as Inter Packet Arrival Time (IPAT) — can lead to packets being stalled, and even the loss of packets at the receiver.

The Problem of Excessive Jitter

Ultimately, if it is not addressed, jitter can seriously impact QoS for broadcasters. This is particularly true for a low-latency system that requires a small receiver buffer size. Therefore, in broadcast video networks, it is vital to ensure that excessive deviation past the expected interval is not occurring, as this risks stalling the signal (due to receiver de-jitter buffer underflow). Broadcasters also must prevent too many packets from arriving with smaller-than expected intervals, as this can overflow the receiver de-jitter buffer and lead to packet loss.

Both excessive deviation and packet overflow lead to video impairment and, in extreme cases, a loss of the video signal. However, with the ability to monitor and diagnose network congestion, (see Figure 1) along with associated jitter problems, broadcasters can maintain a healthy video network that supports reliable video delivery. 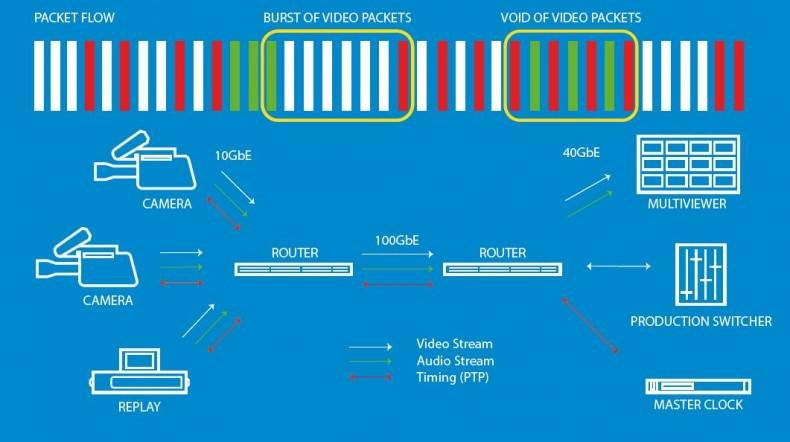 Jitter can be measured through observation of variations in PIT. Analysis of the PIT distribution of a video signal provides an indication of its health, and can warn the engineer of any broadcast critical network congestion.

Plotting a PIT histogram allows the broadcast engineer to gain a real-time view of how network congestion is affecting a video signal. Measurement of the PIT mean, minimum and maximum values provides an instant network analysis at-a glance. See Figure 2. 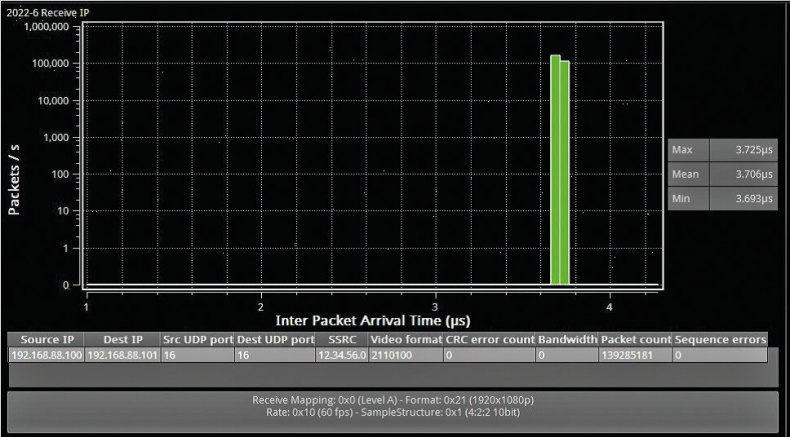 What Is Good Packet Distribution?

In a “perfect” network, a video signal would have constant periodicity, without jitter, and all PIT values would be the same. In a network with very low jitter, the engineer would expect to see a normal distribution, with the vast majority of PIT values in and around the signal period (the expected interval arrival time).

However, the reality of congestion in networks typically yields a broader distribution of PIT values around the expected nominal value. Hence, a healthy video signal will have a distribution peak centred around the expected PIT. Due to the individual characteristics of a network, some significant jitter might be tolerable, but a high occurrence of jitter at the extremes would potentially lead to video signal impairment or loss.

An impaired video signal will have a packet distribution characterised by some of the following factors:

Note in Figure 3, the long PIT values, which are highlighted by the horizontal red arrow. 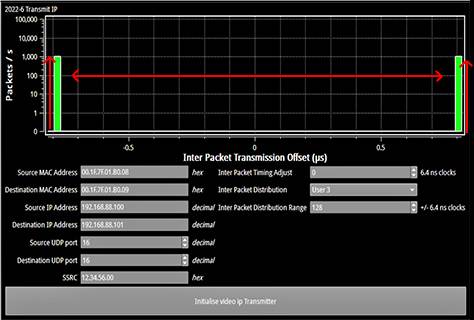 Figure 3. This histogram shows a less healthy distribution, with a significant occurrence of long PIT values.

In addition to performing real-time jitter measurements, an engineer can track PIT variance over time to gain a longer-term monitoring perspective. Logging this data can provide vital information on the health of a network. For instance, a deterioration could be indicated by increased maximum PIT and a steadily rising mean. A PIT logging tool can also provide historical Information (see Figure 4) on network congestion health at the time of an on-air incident.

This display shows accumulated max/min PITs for all packets plotted against time.

It’s not enough to just analyse a video network when there’s a problem. Broadcasters need to stress test their facility as their IP network evolves, and new devices are added. Before adding an IP video device to a network, such as a video router or playout server, it’s important to stress test the response of the device to IP video signals transmitted under a variety of network conditions. It’s essential to have a tool to flag up network congestion issues before they become a real problem.

At least two questions need to be addressed with IP networks.

These questions can be answered by using an IP signal generator tool that has the ability to change transmission packet distribution profiles to simulate different congestion conditions in video networks. 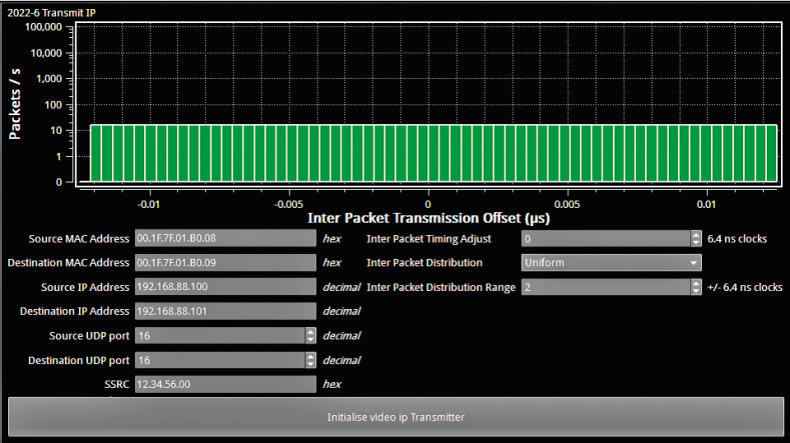 A Packet Profile Generator signal output displayed in Figure 5, shows a histogram of the generated signal’s Packet Interval Timing. The timing can be adjusted to simulate network-introduced packet interval timing jitter, and this allows for the careful creation of bespoke profiles. The ability to save network distribution profiles for future re-use is highly advantageous.

This type of IP video packet generation tool can be used in testing the impact of network infrastructure on IP stream transmission and reception. In conjunction with IP video packet analysis tools, this instrument provides a powerful capability for network stress testing and fault diagnosis. See Figure 6. 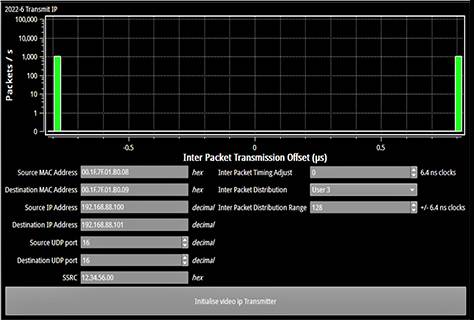 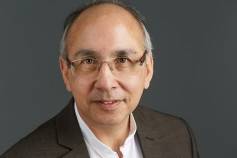