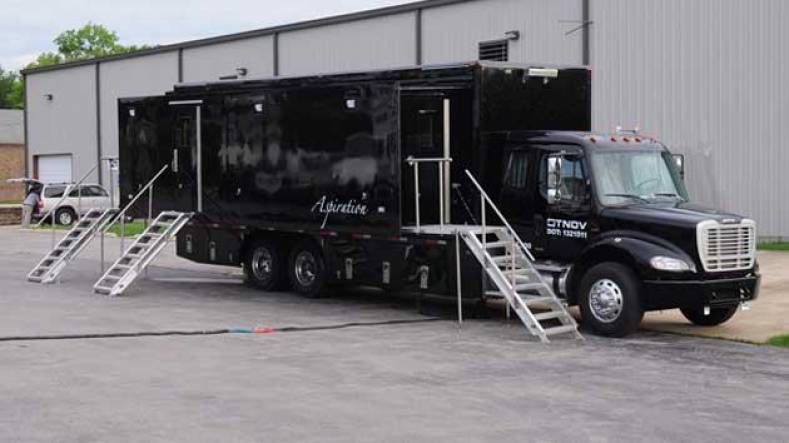 TNDV: Television operates eight production trucks, including its 40-foot “Aspiration.” The crew is partly made up of former interns.

As many in the mobile production business will tell you, there’s a shortage of experienced engineering talent required to produce multi-camera projects. From camera operators, to technical directors to installation crews, the need for good people is prompting production companies to train their own employees for the task at hand.

Nic Dugger is president and founder of Nashville, TN-based TNDV: Television, a production company that operates eight trucks of different sizes that are regularly booked to produce a variety of music awards shows, live tribute music concerts, music-focused network TV shows, and other high-profile events across the country. He said one of the biggest challenges his company faces isn’t related to buying the best equipment or building the best trucks in the business. It’s finding highly dedicated and skilled people to staff their systems.

“For us, it’s all about the archer…not the arrow,” said Dugger. “Our clients rely on us to deliver a turnkey solution that involves onsite logistics, site prep and planning, and state-of-the-art video production. But an essential element to making complex, mission critical live TV go well is talent. It takes the right people with the right skills to coordinate with others and execute on every detail to ensure that the overall production goes smoothly.”

Dugger is constantly in search of reliable crew that is capable of setting up a massiveamount of gear, work very long days, and then pack it all up and move on to the next booking.

He said that to be successful in this demanding environment, where every contribution counts, people need highly specialized video engineering and production know-how that is coupled with resourcefulness, dependability and integrity. In 2004, a year after founding the company, Dugger was looking to add crew and began offering apprenticeships to young people that wanted to can join the company, learn the ropes, master key skills and move up the ladder.

Ten of the company’s full-time staff members joined as college students or recent college graduates, including one who has moved through the ranks to become an engineer-in-charge of the truck on live events. Click to enlarge.

While many of today’s internships expect people to work for free, TNDV’s apprentices receive either college credit or hourly pay, with increased compensation as they take on more responsibilities.

Dugger said it all starts with identifying the right candidates for the opportunity. Prospective apprentices must furnish a resume and references attesting to their sense of personal responsibility and maturity. And on the job, their commitment is continually evaluated. Do they come in early and stay late? Are they conscientious and industrious? And do they handle the video equipment as if it were their own?

“We can teach kids how to pack and unload the trucks, focus a camera, and run the equipment,” Dugger said, “But what we can’t teach is punctuality, dressing in proper attire and having a good work ethic and attitude. On long travel, set-up and production days, when there’s considerable pressure to meet time-sensitive objectives, there’s no place for egos. Character matters.”

Currently, 10 of the company’s full-time staff members joined as college students or recent college graduates, including one who has moved through the ranks to become an engineer-in-charge of the truck on live events. About a dozen more people are in various stages of the program, which allows them to move up based upon their mastery of skills in a wide range of competencies.

These skills are grouped from basic to senior level tasks beginning with a white belt, advancing to a green belt, then to a brown belt and ultimately, a black belt. These skills include: wiring and configuring video equipment, handling audio equipment from the stage to the digital audio mixer, and setting up signal routing and monitoring on the trucks and around the production site. When the myriad of tasks is mastered, the employee knows the ins and outs of every piece of gear on everyone of the trucks.

Willing To Get Your Hands Dirty

Dugger said the people he likes to work with are highly motivated to work in television.

“They’re not just getting coffee,” he said. “They’re getting their hands dirty. Our apprentices learn more in this real-world setting than they generally do in college classrooms.”

Chris Robertson, now a junior engineer with TNDV, began as a freelancer and then, upon graduating from Middle Tennessee State University (MTSU), joined the apprentice program in May 2015.

Robinson, who’s now making his way to the black belt level at TNDV, cites one particular show, Skyville Live—a live music TV series based in Nashville—as a high point of his TNDV career. As a freelancer, one of his assignments was to serve as a utility on the show. Then, as an apprentice—and upon becoming a full-time employee in January 2016, he worked again on a few Skyville Live shows, only this time as the technical director. Recently, he found himself back on the Skyville Live crew, serving now as the video EIC (Engineer in Charge) of the show.

While the video truck business is decidedly male dominated, especially in crew positions on the video trucks, TNDV’s program does have a few females on board who Dugger said hold their own with the rest of the crew. One such young woman is Haley Burnett, who graduated from MTSU in December of 2012 with a BS in Electronic Media Communications. 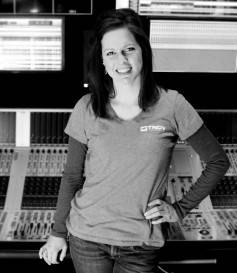 Haley Burnett, a former MTSU graduate, has worked her way up from freelance CG operator to full-time production manager at TNDV.

In the spring of 2011, Haley was producing “live graphics for a MTSU basketball game, when she met Dugger, who just happened to the mobile production unit. She soon was freelancing as a CG operator, and since June of last year, she’s been full-time with TNDV as a video production manager.

More than up to the challenge, Burnett said it’s not uncommon to find yourself having to learn a new piece of software or equipment the day before a show.

“Besides acquiring new technical skills, there’ve also been many unexpected intangible skills, such as the ability to coordinate the efforts of freelancers in a professional manner, think through problems on the fly and act calmly under pressure,”she said.

The apprenticeship programs Dugger started 12 years has served his company well, and it was all inspired by his own experiences trying to break into the business.

“When I was in middle school and high school, I had the good fortune of finding great employment opportunities and mentors who helped me advance my career immeasurably,” he said. “That’s why I’m so passionate about paying it forward. If our apprentices ever feel bored, pigeonholed, or stagnating, I’m not doing my job because they should always be learning and growing, especially as we acquire new technologies. When we see their youthful exuberance and excitement for doing this work, it reminds us of why we really love being part of this industry.”