Wimbledon Broadcast Services (WBS), the newly formed host broadcaster of the world famous tennis tournament, provided multi-camera coverage of all 18 courts for the first time, including a net-cam on both Center Court and No.1 Court, as well as other enhancements throughout the tournament. The Venus and Ceres trucks managed HD, HDR and UHD content on site, providing world feeds to 20 onsite broadcasters and supporting 21 of its own production galleries.

The two NEP UK trucks, linked via a portable IP flyaway system, formed the world’s largest SMPTE ST 2110 OB installation and were able to handle over 118 camera signals, which would have normally involved miles of cabling. However, thanks to the Grass Valley IP infrastructure, this was vastly reduced. 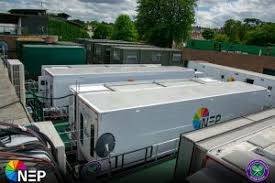