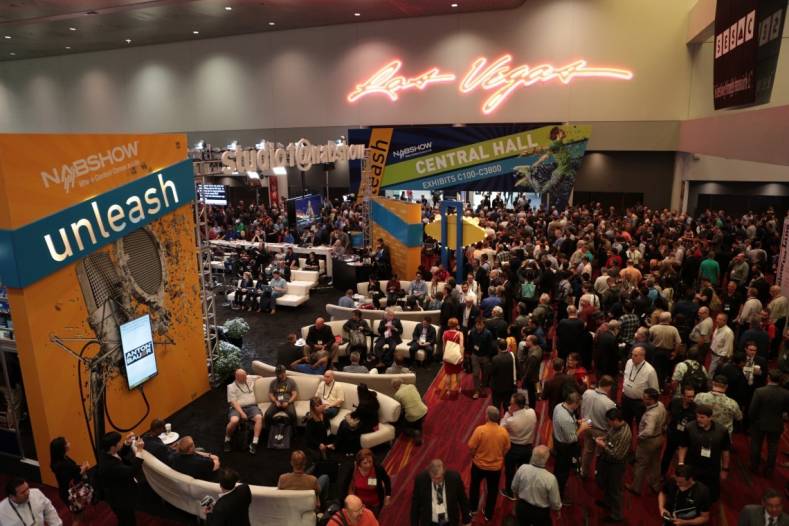 NAB shows are crowded, confusing, but for broadcasters and production people, great fun.

NAB Visitors belong to two groups; those on expense accounts, and those who aren’t. In both those groups are tire kickers, those budgeting for next year, and those with an immediate need and money ready to spend. No matter the budget, buyers have relevant questions to ask of the vendors. But as I learned, not every exhibitor provides answers.

This story isn’t about the 2016 NAB Show, but that’s where it starts. It’s the inside story about the challenge of making purchasing decisions on the carpet in some of the largest exhibits. I didn’t plan to buy anything on the exhibit floor, but intended to issue a purchase order once the best gear for the budget was selected.

You might think people staffing NAB exhibits are trained and knowledgeable sales experts, but in my recent experience, that wasn’t necessarily the case. In addition to gathering information for my show reporting for The Broadcast Bridge, I had money ready spend on new production gear needed for a June 4th live TV event. I was a need-it-right-now show visitor.

My shopping list included three, 3-chip field production cameras, camera support and accessories and cross converters to handle HD-SDI to/from HDMI and format conversion. I was shopping for our group that produces offshore powerboat racing for live radio and TV broadcasts. This year our live TV network has expanded to six stations in three states. I was eager to search for the right gear and surprised about how difficult it was to shop the exhibits for solutions that fit my budget.

The four exhibit halls were wall-to-wall 4K UHD everything. Most anything that wasn’t already available in 4K would be this fall, including field production cameras. While 4K technology can deliver impressive images, it doesn’t fit the current broadcast model. Any device I buy today should last 5-8 years, which is about the time I think over-the-air UHD broadcasting might actually become relevant.

The gear we now own can do 1080p, but ATSC 1.0 tops out at 1080i. Producing in 1080p would look better in the studio, but if stations can’t broadcast it, who cares? It would be one more digital signal needing conversion. Right now in the post 2016 NAB Show world, I must consider 4K UHD similarly. Producing in 4K would require all new gear to shoot, switch and backhaul live 4K. This would push production costs beyond the budget. With that attitude as my filter, it was time to go shopping.

I visited each major manufacturer’s camera exhibits wanting to explore and evaluate their available choices that fit my budget and met my technical needs. Those are among the factors every professional video camera buyer and seller must agree upon to make a sale. And the most important factor is budget.

I went to the “W” exhibit first, headed to the camera display and began looking. The salesperson on the other side of the display asked if I had questions. I said I had a budget of such-and-such, wanted 3-chip cameras and asked what would fit my budget. The salesperson went into a deer-in-the-headlights trance. The person had no knowledge of prices and didn’t know who to ask. I asked a couple of other salespeople in the “W” booth camera display area, they all suggested I talk with my dealer.

I visited the “X” exhibit three times over two days, asking the same question to several other salespeople working the camera display. Nobody knew list prices. Therefore, I couldn’t identify which, if any, of "X"-brand cameras might fit my budget. I was beginning to feel guilty for asking and simply checked “X” prices on the B&H website.

Brand “Y” was another industry leader. The "Y" company salespeople knew their products and the list prices. Some of their cameras fit my budget and I investigated them. Some were HD, some were 4K. Unfortunately, the gear I liked from “Y” exceeded my budget. So, while I admired their products and professionalism, I had to continue shopping. 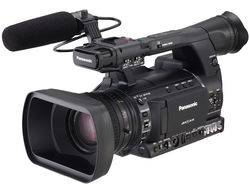 The brand “Z” company staff was honest with me. The cameras that fit my needs/budget would be discontinued this fall, and replaced by a 4K model. However, we had been renting a similar HD camera for previous live shows. The fact that the rental cameras worked well for us and that we were familiar with them, led me to selecting company “Z's” camera (Panasonic). I bought three Panasonic AG-AC130AP cameras from one of the dealers our territory manager suggested. The cameras perform flawlessly, exactly as expected. Are there better cameras? Of course. Are there better cameras available that both meet my needs and fit my budget? Not in my opinion.

It’s hard to do any production work without mixing HDMI and SDI signals somewhere in the process. I needed a couple of two-way HDMI/SDI cross converters that could perform scan conversion to mix 720p SDI security cameras, HDMI GoPros and 1080p iPhones into a 1080i production. I needed another converter to change the HDMI output of our NewTek Tricaster Mini HD output into SDI for the satellite uplink. I’ve rented some expensive cross converters, but they were beyond my purchasing budget. I needed to lower the costs without lowering expectations.

The Atomos Connect, Blackmagic Design Mini Converter UpDownCross, Decimator MD-HX, AJA, and the DataVideo DAC-70 all fit my budget. I gave them all due diligence at the show.

One morning at the Show, I headed straight to the Decimator booth. The exhibits had just opened and several Decimator salespeople were in their booth talking among themselves. I walked past them to the MD-HX product display and pushed all its buttons. It wasn’t much of a self-demo because the GUI wasn’t very intuitive.

I picked up some product literature and read it twice, thinking someone would notice my interest and give me the full demo. Some 15 minutes later I was still playing with the menus and buttons and the people wearing Decimator shirts were still having their meeting. While the list prices were prominently posted in the exhibit, I was hoping to learn more. Oh well.

I liked the Decimator product and after the show, ordered two MD-HX convertors. Apparently so did a lot of other people because the MD-HX is on back order everywhere. At the time, the supplier had the MD-Cross V2 in stock, which is a MD-HX but with test signals. I upped the order to two MD-Cross V2 cross converters.

After telling some friends we bought Decimators, two of them told me of their MD-HX disappointments. They weren’t serious issues, but upon hearing less than glowing reviews from people I trust, I ordered a Datavideo DAC-70 on my own credit card for insurance. 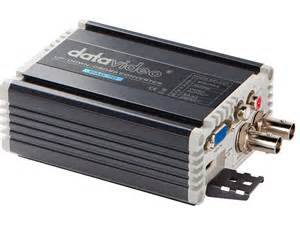 I’m a big believer in the N+1 concept, with N being the number of devices you think you need and N+1 being the number of devices you will actually need in the heat of live production. I needed two cross converters. It turns out buying a third, the DAC-70, was a good idea because as of three days before the June 4th production, we’re still waiting on delivery of the second MD-Cross V2.

The one Decimator MD-Cross V2 we received worked, but I soon wished I had received some basic training at their 2016 NAB Show exhibit. It turns out, if you want the unit to do anything more than pass-thru its input, under the “Control” menu don’t set the HDMI output source to HDMI. This gotcha should be in bold print in the owner’s manual.

In the “Control” menu, set the output to “Scaler/TPG.” In the “Scaler” menu, set the preferred “Output Format,” for HDMI (or SDI) output. The Scaler will do the conversions such as 1080p or 720p to 1080i, and only when the “Scaler/TPG” is set as the output in the “Control” menu. It’s not the kind of thing you want to learn during the heat of a live production. I suspect this is what was tripping up my fellow Decimator-owning friends. 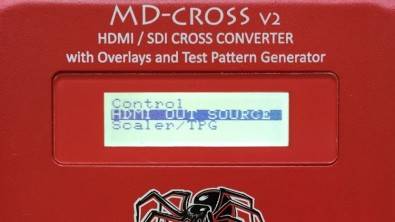 Pre-show familiarization is key with the Decimator scaler. It will do 1080p or 720p to 1080i conversions, but only when the “Scaler/TPG” is set as the output in the “Control” menu.

Once The MD-Cross V2 output was properly set, it easily converted HDMI and SDI in and out of all HD formats. In addition, it provides useful test signals that can drive compression over the edge. The 100% white test signal revealed a monitor blacklight problem. Another test signal was a great source for optimizing our Matrox Maevex encoder and decoder settings.

The post-encoding bandwidth of the test pattern was 15.9 Mbps. Live cameras are usually 15 – 15.2 Mbps. I used the  MD-Cross V2 to experiment with the Maevex encoder and decoder settings because it can output a reliable high-bit rate stream that will reveal any jitter or frame-skipping. When testing end-to-end with the Wi-Fi backhaul gear with encoders and decoders, the “C Move Out C ZP” pattern proved to be a tough test.

The Datavideo DAC-70 performed similar cross conversion functions, but without the test signals. The biggest difference from the Decimator cross converters were the Datavideo's DIP switches. 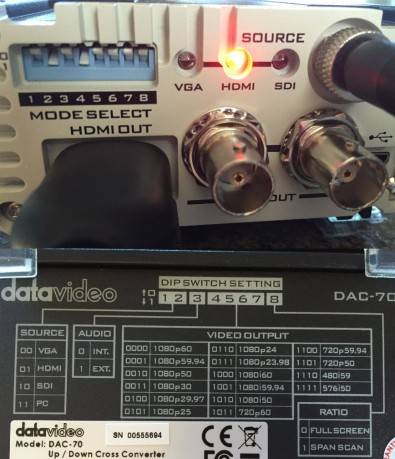 Because the DAC-70 I/O settings are controlled with DIP switches, it doesn't need power to change or verify I/O settings.

The DAC-70 I/O settings are set with DIP switches. The unit doesn’t need to be powered up to change or verify I/O settings. That operating simplicity seemed to add to its reliability. It performed flawlessly. The built-in HDMI connector support is a nice touch I’d like to see on all professional HDMI gear.

Bottom line, when touring an equipment show, understand that some of the booth people may not know as much about their products as you. Don't expect pricing information. That is especially the case when the booth staff are not sales folks.

Despite these minor issues, shows like NAB are the best opportunity to get some 'hands-on' time with the gear you might want to buy. Just don't expect the solutions to be available right after the show. 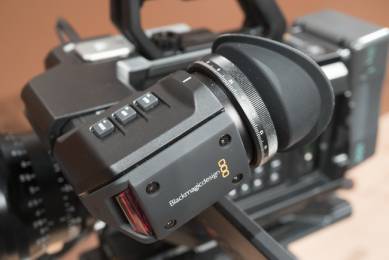 Blackmagic Design has announced a new viewfinder for its URSA mini camera that turns helps customize it for professional studio applications. The 7-in studio viewfinder has been designed for camera operators that may be required to work behind the camera… 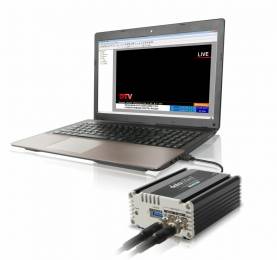 Datavideo Corporation, a provider of a wide variety of production and streaming solutions, has developed a new highly portable solution that allows video professionals to use its CG software and a special device to produce their own on-screen titles and…