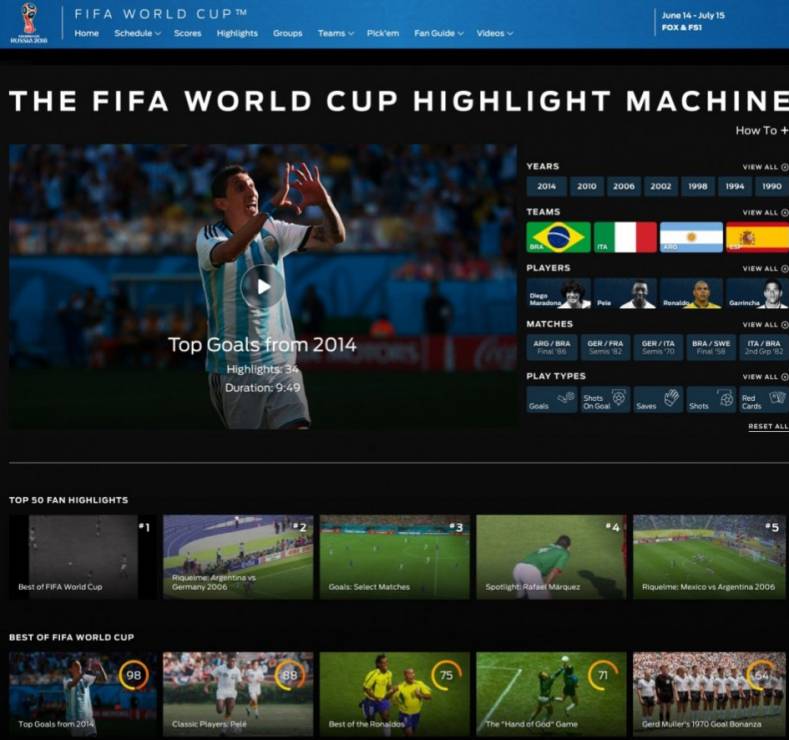 Now you can watch the greatest plays from current or past FIFA World Cup games in The Highlight Machine app. Image: Fox Sports

FOX Sports provided the world wide English telecast of the 2018 FIFA World Cup games, but their Watson super computer built your own highlight reels just for you.

"We announced IBM’s Watson Media in 2017 to provide Artificial Intelligence (AI) tools to media and entertainment companies because video is the world’s largest type of data,” David Mowrey, head of product and development for IBM Watson media told me during our one-on-one interview. “With over 80 exabytes (1018) of video traffic crossing public and private sites every month, only a super computer could hope to make sense of it.”

It was so easy to use - you downloaded the FOX Sports app for Apple’s iOS and Google’s Android for mobile devices or any desktop platform and went to the FIFA World Cup section, and found “The Highlight Machine”.

With it, you can ask Watson to put together a highlight reel based on just about any combination of criteria you can put together from over 300 matches spanning World Cup history from 1958-2014.

Want to see the greatest goals ever scored? Watson can search the entire archive and gather them for you.

Interested in historic head shots? Just ask Watson. How about games in which the U. S. team actually played? The Highlight Machine will dig them out for you.

When you consider that the 2014 World Cup games played in Brazil generated over 98,000 hours of video footage, that would be a challenge for any human to sort through. The 2018 finals, with 64 matches taking place in 32 days produced an even greater load, but nothing that Watson can’t handle.

31 teams plus the host county won the privilege of competing in the 2018 FIFA World Cup. Image: Fox Sports

“Once you have created your own favorite clips reel, you can share it on social media and even feed it back into The Highlight Machine,” Mowrey said. “Then it will be rated by popularity and made available by Watson to other fans accessing the app. That way viewers can be exposed to many more games than they would have otherwise been able to watch.”

Over 3.572 billion viewers around the world watched the FIFA 2018 soccer action coming out of Russia.

But let’s face it. Many in this country (U.S.) who may be less enamored of this sport, especially after the exit of the national team, also benefited from Watson’s Highlight Machine by being able to see the best plays from each game in just a few minutes. To each his own.

BTW, do you know who IBM’s “Watson” was named after”?

Give yourself 10 points if you guessed it was Sherlock Holmes’s room mate, Dr. John H. Watson, and 20 points if you ventured it was Alexander Graham Bell’s assistant, Thomas A Augustus Watson.

But both would be wrong.