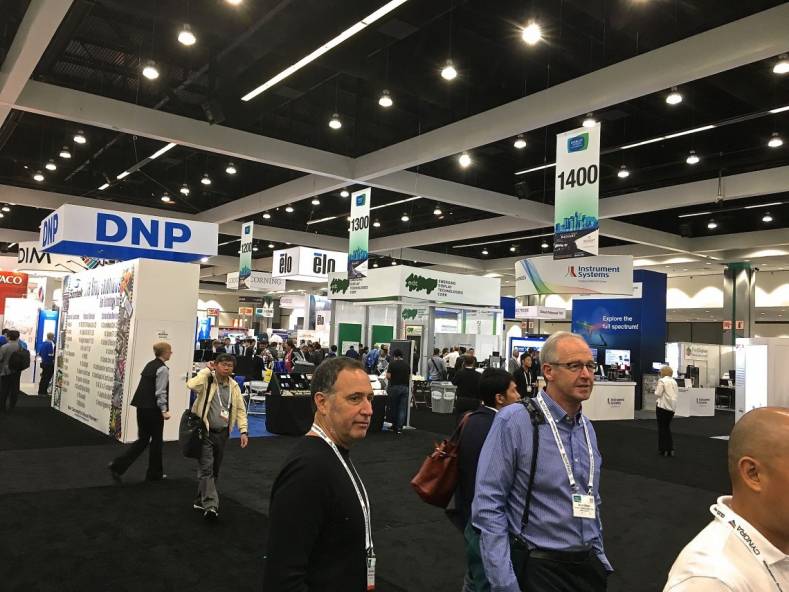 Display Week 2018 brought engineers from around the world to tantalize attendee's imagination with new ways to display imagery and data.

The Society for Information Display’s Display Week introduced more innovative ways of putting images on screens than ever seen before.

It’s the annual convention of the Society for Information Display (SID), and as Helge Seetzen, president of the organization told me “Display Week offers an opportunity for digital creators to see the display technology available to broadcasters and others today,” he said, “and also gain previews of display technologies that may be available to them in the future." 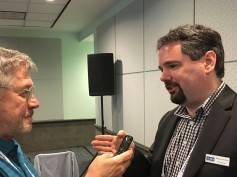 In addition to filling the West Hall with seminars and forums, and the Expo Hall with innovations like flexible screens and 8K monitors, part of Display Week’s goal was to teach us the new three “R”s of displays: VR (Virtual reality), AR (Augmented Reality) and SR (Simulated Reality).

Maarten Tobias, CEO of Dimenco, a spin-off from Philips, described their goal of creating an experience that involves all the senses, with 3D autostereoscopic (glasses free) imagery including haptic feedback from ultrasonic touch sensing.

“We call it ‘Simulated Reality’ that we will develop until users can’t distinguish virtual from reality,” he prognosticated. “We want to stimulate all of your senses in an interactive environment on what we call the SR platform.”

That’s quite a challenge, but Tobias predicted it was about 3 to 5 years from being accomplished, with the first prototypes in 4 to 5 months. Dimenco's Simulated Reality presentation let attendees to touch the floating spheres, which then provided them with haptic feedback.

The technology presented in the Dimenco booth was indeed impressive, if still a work in progress.

The exhibit had a three dimensional man with three spheres resting in mid air before him, and if you reach out to touch them not only does he react to your hands, but you can feel the spheres thanks to a blast of ultrasonic air.

Tobias dropped the hint that we will be seeing this technology with moving imagery later in 2019.

Another example of future display capability was the floating image at the Tianma America exhibit. Here an inverted bowl was shown just sitting in free space.

As the company's senior manager, Robert Dunhouse, explained, “It’ all based on what we call our horizontal, double density pixel structure, “ he said. “It takes a standard LCD display, rotates the vertical RGB stripes to the horizontal and then splits them in two at the sub-pixel level. 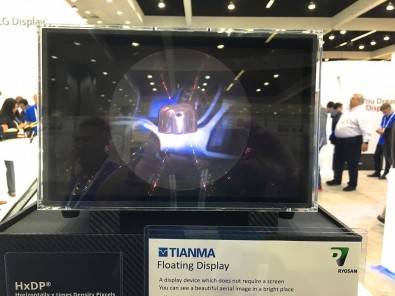 One advantage of this kind of display imagery is there is no screen to clean.

Over the top of that is a vertical lenticular lens that directs the right eye/left eye/ information.”

The image we were seeing was based on a two-view structure. But Dunhouse said they also have a six-view version in the works. As with any lenticular imagery, the more views, the less of a “jumping” effect will be seen as the observer moves side-to-side. Like any technology, it’s just a matter of development.

But for me one of the most exciting of the new display innovations is light field technology in which a series of stacked receptor sensors in the camera records a deep field of light, and that in turn is displayed on an array of layered LCD panels.

One can actually see around the image. 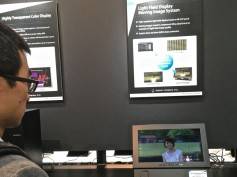 Light field imagery may be the technology of the future.

There were several light field demonstrations in the Display Week Expo Hall, none of them easy to photograph. The most visual was in the Japan Display exhibit where Takeo Koito, associate technical specialist in their R&D division, told me that because the company's display used very thin layers, which produced a wide viewing angle that could be watched by several people at the same time.

Fortunately, the SID president, Helge Seetzen, had been in on the birth of light field development when he was at MIT.

“You can steer the light in these displays either temporally with a super fast display or through elaborate layers of lenses,” he said. “And the computational hurdles are still to be overcome.”

But consider the potential, while keeping in mind that Seetzen is responsible for developing the underlying technology behind Dolby Vision.

“In the long term, this could replace conventional photography.”

And, he went further.

“With a curved display screen and sufficient light screen capture and presentation capability,” he said, “you would actually be able to walk around the image. It could compete with holography. Then we are at the finish line, more or less.” 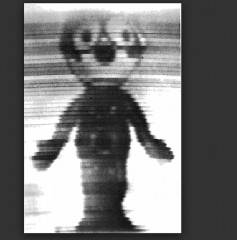 For those who want to dismiss these display technologies whose potentials have yet to be proven, consider this image of Felix the cat, which was John Logie Baird’s first successful transmission of a television picture in 1925. What seems strange, even impossible today, could become reality tomorrow.