As part of any program production, audio mastering is the final step in the audio production chain. The last phase before transferring it to a master source for distribution to end listeners. Few people are genuine experts at audio mastering, because it has long required critical listening skills. Today’s software can help ease the process, but mastering is a subject every audio professional should understand and consider.

Mastering engineers try to make an audio program sound good on a variety of playback outlets, ranging from good home systems to car radios to earbuds used with iPhones. Very often they apply corrective equalization and dynamic compression to optimize audio for all these playback systems. The results of mastering usually depends upon the skills of the mastering engineer, the intent of the client, the accuracy of the speaker monitors and the acoustics of the listening environment. 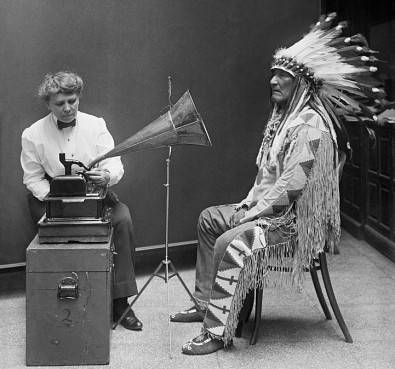 Chief of the Blackfoot Tribe being recorded in 1910.

Like all audio processes, mastering has a history that it useful to understand. In the earliest days of recording, the entire process, including mastering, was mechanical. People spoke, sang or played musical instruments into a large acoustic horn and the master recording was created by the direct transfer of acoustic energy from the diaphragm of the horn to the mastering lathe.

A cutting head, driven by the energy transferred from the horn, inscribed a modulated groove into the surface of a rotating cylinder or disc. These masters were usually made from either a soft metal alloy or from wax. This gave rise to the term “waxing” — meaning the cutting of a record.

In the late 1940s — after World War II — magnetic tape arrived in the United States. It enabled master discs to be cut separately in time and space from the actual recording process. Even though quality improved, the basic sonic limitations of the recording media remained — the 78 rpm disc and the later seven-inch 45 rpm single and 33-1/3 rpm LP record.

Until the arrival of digital recording in the late 1970s, the mastering process went through several stages. A final mix was prepared and dubbed down to a master tape, usually either a single-track mono or two-track stereo tape. Prior to the cutting of the master disc, the master tape was often subjected to further electronic treatment by the mastering engineer.

In the 1990s, digital technology began to take over. The digital audio workstation (DAW) became common, allowing the off-line manipulation of recorded audio via a graphical user interface. Although many digital processing tools are common during mastering, many mastering engineers still prefer to use analog media and processing equipment for the mastering stage.

Today, there is no optimum mix level for mastering. Mastering is often up to the engineer in charge of the process. The source material, ideally at the original resolution, is processed using equalization, compression, limiting, noise reduction and other processes. More tasks, such as editing, pre-gapping, leveling, fading in and out, noise reduction and other signal restoration and enhancement processes can be applied as part of the mastering stage.

It is standard practice to make a copy of a master recording, known as a safety copy, in case the master is lost, damaged or stolen. The mastering process itself varies, depending on the release formats. The mastering engineer needs to examine the types of input media, the expectations of the source producer or recipient, the limitations of the end medium and process the subject accordingly. General rules of thumb can rarely be applied.

Now, in the age of low-cost media production, few can afford their own mastering engineer. It becomes a major challenge to ensure an audio recording is at its best. Sweetwater Sound, a pro audio dealer based in Fort Wayne, Indiana, has issued some guidelines for newcomers facing mastering issues.

Before starting a project, Sweetwater advises trying to hire or acquire the services of an experienced mastering engineer. This is an important element and not the place to cut costs. Try to find another way to save money. In additional the valuable skills of a mastering engineer, it is also useful to have a set of professional and unbiased ears to assess and tweak your mixes.

Other recommendations Sweetwater recommends are to consider the use of an expander if tracks are squashed, flat and uninteresting. As the opposite of a compressor, expanders increases dynamic range by reducing the volume level of signals that drop below a certain threshold level.

Using a modest expansion ratio of, say, 1.5:1 or 2:1, set the expander’s threshold so that slightly soft passages aremade even softer, but not so soft as to sound unnatural, as if you just turned down the volume.

Also, remember there are a lot of excellent mastering compressors, EQs and processors available in both the analog and digital realms, Sweetwater said. The one thing they all share in common is that even if they have a signature sound, they’re meant to be used in moderation to enhance a competent mix.

In the mastering stage, use the highest-quality, most transparent hardware or plug-ins and make micro-changes — add just a couple dB of high shelving EQ to bring out the “air,” or a few dB of multiband compression on the low end to add punch.

The mastering stage, Sweetwater warned, is not where to fix problems with the mix. If the mix has problems, go back and fix them. But don’t try to fix them in mastering. Mastering is the polishing of a finished mix to an even higher sheen.

Finally, a limiter is a dynamics processor that clamps down on signals hard when they exceed an upper threshold level. Basically, the limiter sets a ceiling level for the levels. Limiters are ubiquitous in mastering for keeping the signal from peaking above a hard output limit, which can cause undesirable clipping (distortion) in the signal.

However, if a limiter has to clamp down too quickly, it can cut off the attack/transient portions of louder parts of the audio and make the end result sound dull.

Enter the “look-ahead” function. In the digital realm (meaning, either software limiters or digital hardware limiters), the limiter can decrease the audio level before or as it actually crosses the threshold.

It literally looks ahead at the audio to determine when it will need to function. This allows the limiter to see into the future — to evaluate the audio in advance — so it knows where it will need to clamp down and can do it in a much more natural way. This is exactly what you want from a mastering limiter.

Mastering is too often forgotten in today world’s of increasingly self-produced audio. From podcasts to local television programs to music recordings, mastering should always be considered an essential final step in the audio production. It is a step that can make your programs stand out among the pack.