For both broadcasters and viewers, audio description, represents uncharted territory. Even so, there are new legal requirements.

Blind people consume as much video programming as do sighted people. In recent years, the FCC has actively increased audio description requirements through the CVAA (21st Century Communications and Video Accessibility Act). Broadcasters are required to provide audio descriptions for certain content. Here is what you need to know.

The FCC requires video programming distributors and providers to make the critical details of emergency information accessible to individuals who are blind or visually impaired. This includes any information intended to further the protection of life, health, safety, and property.

The critical details include, but aren't limited to; specific details regarding the area that will be affected by the emergency, the evacuation orders, detailed descriptions of areas that must be evacuated, specific evacuation routes, approved shelters, or the way that someone would need to take shelter in one's own home, and instructions on how to secure personal property. Such critical details during an emergency must be made accessible to all audiences.

A blind or visually impaired person would want to immediately switch to the secondary audio stream. The SAP channel is supposed to broadcast the emergency information read out loud. During regularly scheduled programming, SAP can include all sorts of interesting audio streams. Often, a Spanish language version of the show being watched is carried on the SAP channel. Sometimes, there is described video. Sometimes there's no sound at all or the secondary audio stream is playing the main audio stream. For these reasons, viewers may not listen full time to a station's SAP channel.

A key point. This rule applies only to a cable or satellite company's own network. Typically this would be the cable or satellite company's in-home TV service when it is accessed via a broadband connection.This rule doesn't apply if that same customer is using, for example, the Wi-Fi at Starbucks. But, if a viewer is watching cable in their own home on the cable company's broadband connection, the provider must pass through the secondary audio stream so they can hear the audio representation of any emergency information.

The SAP channel is used for audio description.

The blind or visually impaired have unique requirements in terms of controlling video devices, typically the STB. The FCC rules require that a user be able to operate and use all or most of the functions of such devices. This includes; the settings and the menus, channel selection, start and stop, fast forward, so on. Most of this is accomplished through a speech synthesizer, meaning that the program guides and menus are read out loud by converting the text on the screen to computer-generated speech.

Another set of accessible user interface rules apply to the wide range of other devices that can access video programming. This would include televisions, smart TVs, tablets, smartphones and removable media players. The FCC's rules also apply to common streaming devices such as; Apple TVs, Roku and Amazon Fire sticks. These rules also cover computers because of they can also access broadband-delivered content.

The rules apply to any device manufactured after December 20th, 2016. Because many of these types of products are now increasingly popular, content providers and MVPDs must realize that meeting these FCC rules is not a trivial matter. 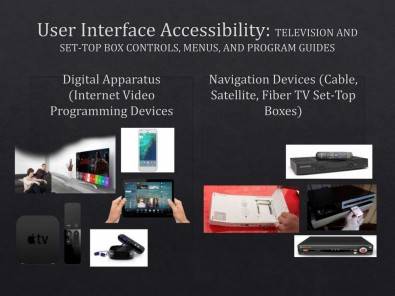 Some remote controls can challenge a viewer's need for quick access to emergency information.

Often, TV remote controls have no simple or easy way to switch to a secondary audio stream or audio channel. Approved accessible-user interfaces, with their text-to-speech capability, will enable users to more easily navigate to the proper settings allowing them to change the audio stream.

One of the particularities of this rule includes the requirement that there be a mechanism that is reasonably similar to a button, key, or icon. One of these mechanisms must exist for each of the closed caption and for the video description functions.

A mechanism that is reasonably comparable to a button, key, or icon is vague, because these devices vary dramatically. Some remote controls are simple, with perhaps only five buttons. Cable and satellite remotes often have 60 or more buttons, some with multiple functions. It is unclear if a voice-controlled TV remote control would meet these requirements. This is a case where the technology leads regulations.

The FCC rules call described video "video description." Almost everywhere else it is called audio description. They mean are the same thing in terms of broadcaster requirements.

There are some other program providers that include audio descriptions, but they do so voluntarily. A list of these stations is updated every three years and is slated to be re-evaluated in July 2018, so the list may change. A copy of the list is available on the FCC's website.. 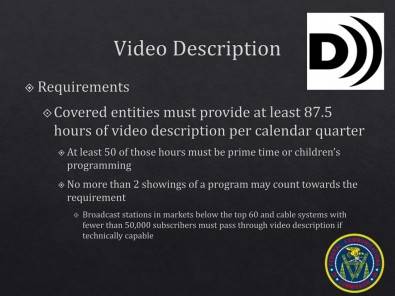 Not all TV stations are required by the FCC to transmit audio descriptions, but some stations broadcast them voluntarily. Click to enlarge.

The new rules require that on July 1st, 2018, the covered stations must begin providing 87 and 1/2 hours of video description per quarter. This totals about 7 hours per week of described video, which is an increased requirement of 75%. The 50 hours per quarter will continue to be required during prime time and/or children's programming. The additional 37 and 1/2 hours of described video can be aired anytime between the hours of 6:00 AM and midnight.

Everyone should watch a few programs that contain audio descriptions. That is especially the case for professional broadcasters and content makers. First, you will better understand what the technology can provide. Second, you may discover that the technology actually adds to your enjoyment of a program.

Sighted people often find that audio descriptions help them better follow a complex program or themed show. An example would be watching a show which includes time travel. The audio description will normally clue the viewer in on things that indicate what time a character has traveled to, or point out a characteristic that indicates that a character is no longer the original person but rather a duplicate person or time-traveling person.

Such complex changes may be difficult for sighted people to follow. Actually, it can be quite enjoyable for a viewer to more easily follow a story with the additional detail while discovering program elements that they may have previously missed.

The FCC maintains a free listserv, which contains useful information about the FCC and the disability-related issues under discussion. To be added to the list, simply email [email protected] and ask to subscribe.

Will Schell is an Attorney Advisor at the Disability Rights Office of the FCC. He recently reviewed audio description requirements and content provider responsibilities in a webinar hosted by 3Play Media. This article is based on his web presentation. To view the webinar, click here. Images courtesy; 3Play Media. 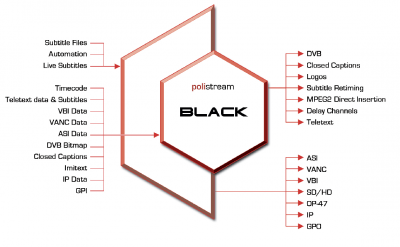 Improving accessibility of content through Video Description. The accessibility of media to partially sighted audiences may be enhanced by provision of additional information in the form of audio narrative track. An audio description of the video content is called “audio d…