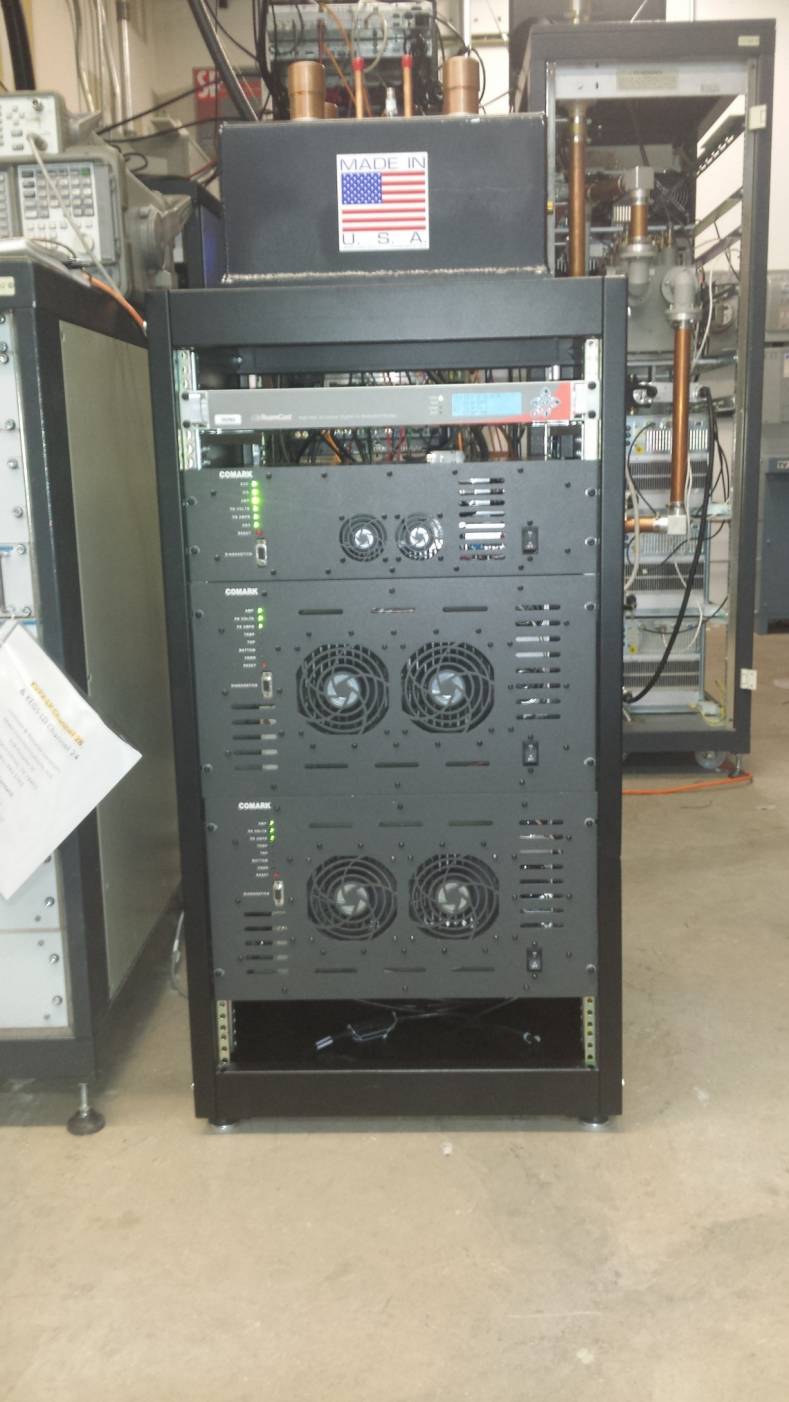 What is a Doherty Amplifier? A Doherty amplifier, named after its inventor William H. Doherty in 1936, was originally designed to increase the efficiency of high power vacuum tube AM and Shortwave broadcast transmitters. A basic block diagram of a Doherty amplifier is shown in Figure 1.

The basic operation of this amplifier configuration is the input signal is split with a 90° phase shift being applied to the signal that goes to the Class C peaking amplifier. To offset this phase-shift the combining of the amplifiers has a 90° line inserted on the output of the carrier or average amplifier. When the two amplifiers are combined, this combination does not represent a 50 ohm output, so a matching section is required to step the impedance back to the 50 ohm point.

As for operation, the average class AB amplifier is utilized for a vast majority of the RF modulated waveform. The harder a class AB amplifier is driven, the higher the efficiency that is able to be attained from it. The drawback is peak power compression and distortion products which at high power levels become “un-correctable” with modern digital linearization techniques. Running the average amplifier farther up its curve results in substantial operating efficiency gains.

On the other side of the Doherty amplifier pair is the peaking amplifier, a class C amplifier. Class C amplifiers have two good qualities for this part of the amplifier. First, they are inherently efficient, and they also have lower gain at low input levels as they are not at all linear when referencing their power in to out transfer curve.

They have poor quality because their transfer curve is not linear and they produce more distortion products than their class AB counterpart. Due to the “small signal” gain difference, this allows the class AB (average) side to be driven by the digital modulated RF signal up into the area of the transfer curve where they are approaching saturation and are operating very efficiently leaving the class C (peaking) side to amplify the peaks of the signal essentially “making up” for what the class AB (average) side cannot reproduce on its own.

With digital modulation, as the peaks become larger in amplitude they become more infrequent, the class C amplifier is actually “off” more than it is “on”. This, coupled with the peak power capability and high efficiency, allows when these two amplifiers are then properly combined, to reproduce the digital modulated RF signal at a much higher efficiency than would be available if just a class AB amplifier were used.

One of the “downsides” of Doherty configured amplifiers is the combination of “over” driving the average class AB side and then combining it with the inherently non-linear class C Peaking side. The resultant output, although it is reproduced reasonably well in amplitude, contains quite a lot of distortion products that without the use of modern correction techniques, pretty much renders the output from this type of amplifier unusable at nearly all power levels.

This is not at all like the class AB amplifier covered earlier, where at lower power levels the amplifier can actually meet the required specifications for a broadcast signal. There are many configurations of Doherty amplifiers. A number of these are explained in detail in an application brief produced by Ampleon.

For the purposes of this paper we will discuss two basic types both of which are configured as shown in the block diagram in Figure 1. These two types are Symmetrical, and Asymmetrical.

The Symmetrical configuration has the amplifiers on both the average and peaking side being comprised of the same basic amplifier with the same power capability, and it is simply a matter of how each of the sides are biased and operated.

The Asymmetrical configuration is when one side of the amplifier is configured to have either more or less power capability dependent upon what the signal is that it will be used for and what the signal’s characteristics are.I n the case of digital television, this is traditionally accomplished by increasing the size or capability of the peaking amplifier.

Figure 2: The Ampleon BLF888D was tested as a pallet in the Ampleon demo circuit. Click to enlarge.

For this paper the Ampleon demo circuit as shown in Figure 2 was used. 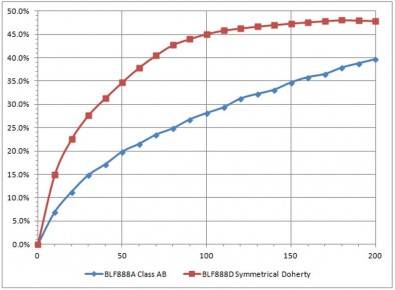 The curve of efficiency versus power for the symmetrical Doherty configuration is markedly different from the traditional class AB amplifier curve.

Not only does this Doherty configuration have substantially improved efficiency throughout the curve, the curve is much “steeper” having the efficiency rise quickly and be within only a few percentage points of maximum with the amplifier only at the 100 watt level.

Above 100 watts only a few more percentage points are gained as the power is increased.

Figure 4: The Ampleon BLF888E as tested as a pallet in the Ampleon demo circuit. Click to enlarge.

In this example, the Ampleon BLF888E was tested as shown in Figure 4.

Again, as a comparison, the BLF888A datasheet rates this LDMOS FET as a 600-watt part. 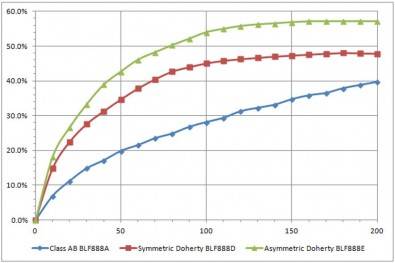 Again, not only does the Asymmetrical Doherty configuration have substantially improved efficiency throughout the curve over the other two types, the curve is much “steeper” having the efficiency rise quickly and be within only a few percentage points of maximum again with the amplifier only at the 100-watt level. Above 100-watts only a few more percentage points are gained as the power is increased. 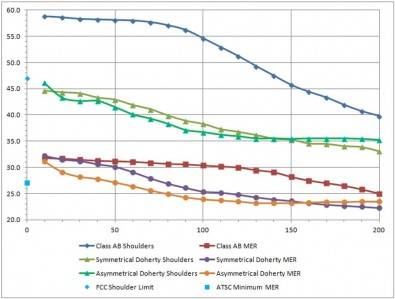 The future is nigh

How does this apply to TV broadcasters? With the FCC channel re-pack coupled with the looming modulation format change from ATSC 1.0 / 8-VSB to ATSC3.0 / OFDM, broadcasters need to look at how best to cope with their currently aging equipment some of which is approaching the 20 year old mark.

If their current transmitter plant was initially built with enough peak power headroom to accommodate the new ATSC 3.0 modulation standard, then they’re down to aging equipment and or channel change.In any case, time, and technology marches on and with the efficiency and power level advances in solid state technology outlined above chances are the broadcaster will be looking at new transmitter gear. This makes the technology choice and its features critical to allowing for future changes.

Although the most efficient transmitter, MSDC IOT transmitters require periodic maintenance of equipment which contains lethal voltages up to 40kVDC.This requires highly skilled individuals to do the work, often in pairs for safety.

Solid state LDMOS based transmitters employing Doherty-based amplifier configurations, while being not quite as efficient, are virtually maintenance free and can be maintained and repaired by less specialized personnel. Doherty configurations will be the transmitter of choice in most cases.

Editor Note: This story is an excerpt from the white paper, “Doherty Amplifiers ‘101’ and How They Apply to DTV” available from Hitachi Kokusai Electric Comark.