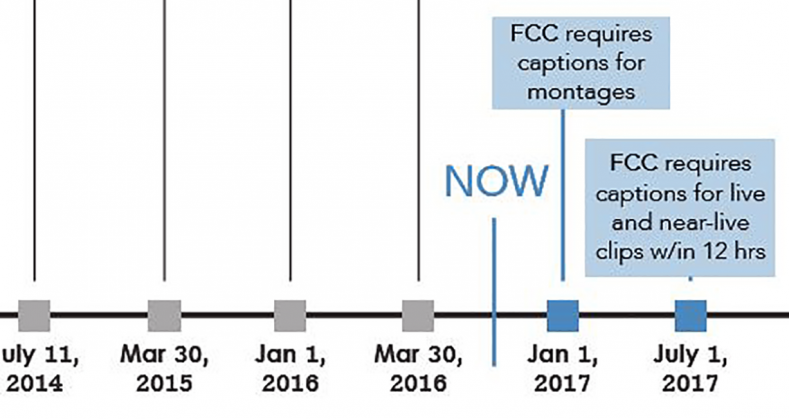 The FCC mandated closed captioning in the early 1980s as a requirement for US TV broadcasters to make programming accessible to all audiences. In 2017, new FCC and 21st Century Video Accessibility Act some new rules will apply to captioning of TV content posted on the internet.

In an age when online video streaming services rival traditional broadcasting, how do broadcasters ensure content is captioned for those who need it? The 21st Century Video Accessibility Act (CVAA) tackles that question. Signed by President Obama in 2010, the CVAA sets clear rules for internet video programming and clips that previously aired on TV in the US. It is enforced by the FCC and phased in for video creators over several years.

CVAA modernized and broadened a string of laws passed in the 1980s and 1990s designed to ensure that TV and telephone services were accessible to people with disabilities.

The Federal Communications Commission (FCC) enforces compliance with the CVAA and clarifies the law when necessary.The CVAA requires that video programming that is closed captioned on American TV is also closed captioned when distributed via internet protocol (IP). It does not include programs shown only on the Internet.

On the other hand, some video content is excluded from CVAA captioning requirements. Such excluded content includes consumer-generated homemade movies and videos originating on the internet, and internet-only video content such as Netflix originals and others such as Amazon Prime originals. Unless movies have aired on American TV with captions, they are not required to have captions for Internet distribution under CVAA rules. However, note that this type of content may be covered under the ADA. 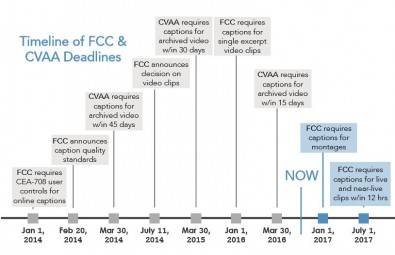 As shown in Figure 1 courtesy 3Play Media, as of 1 January 2017 the FCC and CVAA require captions for montages. What is a montage? According to the FCC webpage “Captioning of Internet Video Programming,” a montage is a single file containing multiple straight-lift video clips. A straight-lift video clip is a single excerpt of a captioned TV program with the same audio and video that was shown on TV.

The same FCC “Captioning of Internet Video Programming” webpage also instructs consumers how to file a complaint. It states “If you experience a captioning problem after the implementation dates, you may file a written complaint with either the FCC or the video programming distributor or provider.”

The FCC advises consumers “Your written complaint must be filed within 60 days of the captioning problem. After receiving a complaint, either directly from you or from the FCC, the video programming distributor or provider will have 30 days to respond to the complaint. If you chose to first file your complaint with the video programming distributor or provider and it does not respond within 30 days, or if a dispute remains, you can still send your complaint to the FCC.” 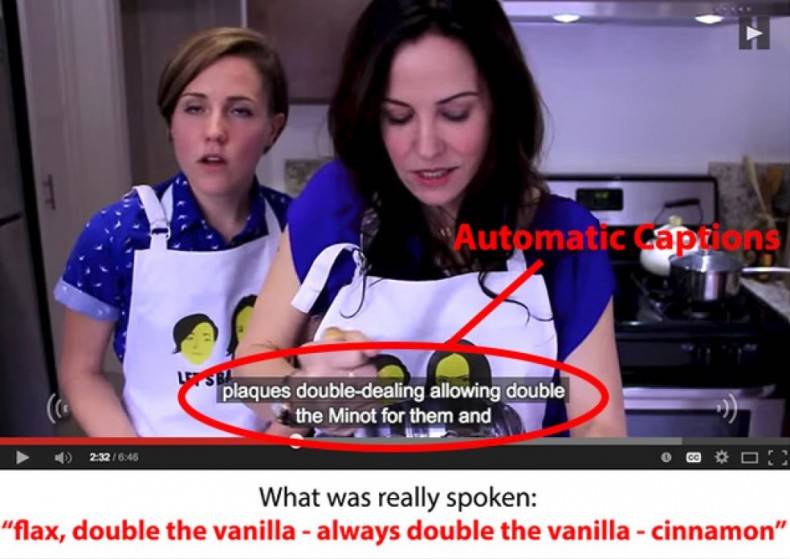 Caption accuracy is critical to meeting both viewer and FCC requirements. Note in the above image how simple phonetics translations may result in caption errors.

The FCC states, “In order to be accurate, captions must match the spoken words in the dialogue, in their original language (English or Spanish), to the fullest extent possible and include full lyrics when provided on the audio track.”Specifically, they require captions to include all words spoken in the order spoken (i.e., no paraphrasing).

The FCC states, “In order to be accurate, captions must match the spoken words in the dialogue, in their original language (English or Spanish), to the fullest extent possible and include full lyrics when provided on the audio track.”Specifically, the FCC requires captions to include all words spoken in the order spoken (i.e., no paraphrasing).

Captions must use proper spelling, spacing between words, capitalization, and punctuation. YouTube's automatic captions are not accurate enough to meet CVAA standards. Accurate captions must also convey the tone of the speaker’s voice and intent of the content.

The goal is for captions to maintain the impact of the performance so that the overall message is not lost on the viewer. Captions of essential nonverbal information (sound effects, music playing, audience reactions, who is speaking) must be provided if they are to be considered accurate.

Developing high quality captioning processes and folding them into your workflow is the key to FCC and CVAA compliance.