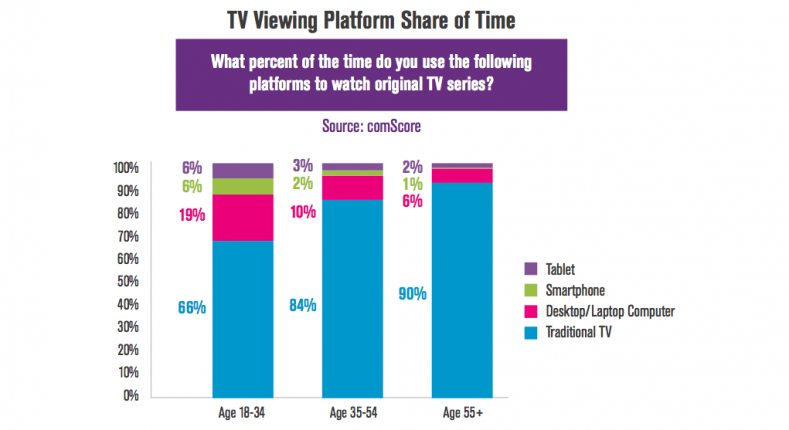 Older viewers are more likely to rely on TV sets for viewing. But, as younger audiences age, will they continue clinging to their mobiles?

As I’ve written before, this year’s IBC was not about introducing new products, it was about joint partnerships, “IP Is Close, But How Close?” “… a higher than typical number of partnerships, buyouts and sharing technology announcements were made.” Yet, it is all about IP is it not?

Undertaking such a tectonic shift in technology often requires help. But while we all are stewing about which version of IP to use, have the audiences already made the shift?

Broadcasters are typically hesitant to embrace chance. Yet, when asked about the pace of change, Dave Frederick, Quantum’s Senior Director, Media & Entertainment, said, “Technological change is not just constant, it’s constantly accelerating. And in the M&E industry right now, you can’t afford to blink.”

One of this industry’s problems is that every broadcaster or network is individually competing in the drive for audience. Even so, while the number of players shrinks, the total audience size grows. There are now more than seven billion people, most grasping for more content and for much of this audience, IP delivery is the only path to content.

The case for IP delivery

Cisco and others document the increasing use of IP to reach audiences. The Rio Olympics saw large increases in delivered streamed content. Akamai says more than 3.3 billion minutes were distributed to 100M unique users. And that’s with only about 40 percent of the world population having an internet connection.

On the third day of Rio, Akamai had already exceeded the total amount of video data that it delivered for all 17 days of the London 2012 Olympic games. The company reported that the Brazil Olympic games drove 100x more live streaming than London and Sochi, at 2 times the speed and 3 times the traffic peaks.

Allan McLennan, of the PADEM Group, said the studios, broadcasters and cable providers aren’t blind to the shift to IP, OTT (over the top), mobile and the fading bundles of channels cable and satellite providers so love to sell.

And even though most people still consume their entertainment from a TV, they’re rapidly becoming more aware of accessing that programming whenever, wherever it’s convenient. For the industry, the point is that even though OTT currently only accounts for about 8 percent of the category, the other 92 percent is shifting rapidly to IP-delivered content.

While people huddled around the one-eyed monster when television was first introduced, it is now entering a new phase of life where viewers have more control over what they watch; when they watch it and increasingly, how it is viewed. The shift is a concern for both broadcasters who deliver content and the content owners who need to recover costs through advertising. 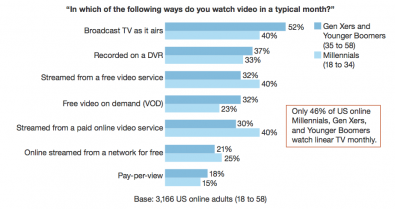 Broadcast TV still reaches a broader audience than any other format, but only by a small margin. Only 40 percent of millennials (ages 18 to 34) and 52 percent of Gen X-ers and younger boomers (ages 35 to 58) tune in to live TV each month, according to Forrester’s data. Click to enlarge.

The traditional cable industry understands that people are shedding their bundled solution to go OTT and that in the future, people may choose and pay for only what they want (single-show, single-channel).

But face it, the traditional MVPD model has been around – and very profitable – for a long time. Trading that certain (and highly profitable) revenue stream for something much less predictable, because it depends on individual user views, is not welcomed by the conglomerates.

Studies confirm that TV viewers regularly watch only 15-20 channels from a mid-level package of 150-200 channels. That’s because distributors/programmers write major program agreements for typically five years and they require good/bad programs/channels to be purchased as a group.

Time Warner Cable chairman and CEO Rob Marcus noted that the cable industry should embrace over-the-top video, but added that at this stage of the game, the full cable bundle still appears to present the best value for the consumer.

Back to this article’s summary. My kids no longer watch NFL football. Instead they catch highlights later in the day on their phones, or catch up the following day with friends. Worried yet?

QZ.com: An average NFL game: more than 100 commercials and just 11 minutes of play 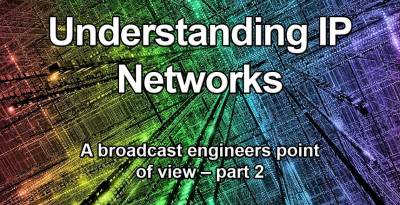 In the last article we looked at the problems routers and switchers solve, and built a simple office network to show the benefits of IP networks. In this article we continue the theme of looking at a network from a… 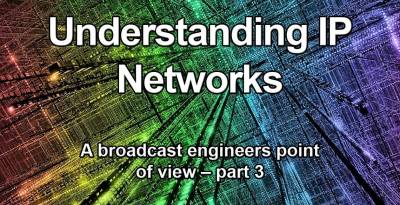 In the last article we looked at the life of an IP datagram as it travelled through a network from a camera to vision mixer using static routing. In this article we continue the theme of looking at a network…