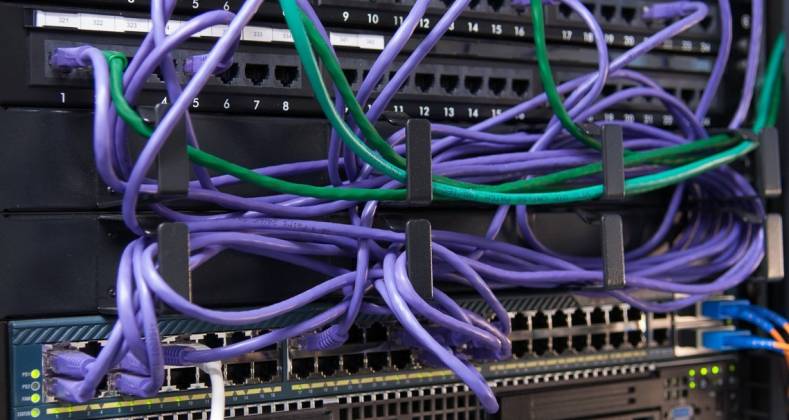 IP is set to become ubiquitous.

IBC 2017, much like the Amsterdam weather, was full cloud cover. Underpinning the ubiquitous “cloud-ready” tags is the out-and out adoption of IP for the carriage of live video. Coincident with the show, the SMPTE released ST 2110, Professional Media Over Managed IP Networks, the standard for video IP that finally breaks away from the baggage of analog video.

A century ago, engineers invented television, figuring how to transmit a stream of frames in real time from the camera tube to the cathode ray tube (CRT) in the home receiver. They developed a way to synchronise the receiver to the camera by embedding vertical (field) and horizontal (line) synchronization in the video stream. Adding time for the electron beams in the camera and CRT to flyback at the end of a line or field (blanking), and they could provide everything to reconstruct the camera raster in the receiver. A single coaxial cable could carry this VBS (video, blanking, sync) information. Adding color information at the end of the 1940s gave CVBS, and that it how it continued until the advent of digital video in the 1980s. There were a couple of developments, one was analog component, which used three cable to carry luma and two color channels. The other was Y/C to carry the modulated color information on a separate cable from the luma. These were used primarily to dub from one videotape recorder to another.

With the development of digital video, it remained a single-cable connection. Initially a multipair cable carrying parallel streams of data, but rapidly the serial digital interface (SDI) was standardized. SDI, at increasing data rates from 243 Mb/s up to 12 Gb/s, has been the primary means of carry uncompressed video around television production facilities since then.

SDI was essentially a digital implementation of analog component video, right down to the ancillary data space corresponding to the CRT blanking interval. This wasted space was soon utilized to embed audio and other data.

Meanwhile, when it came to storing video on computer systems, first for editing and later for playout, engineers naturally used computer networks to interconnect edit workstations and storage. However, file transfer was best effort over IP, and not related to realtime video—it didn’t need to be.

As the use of off-the-shelf computer processing and networks has expanded throughout the production chain the search was on to find a solution to the many issues around carrying live video over IT networks. There were issues of jitter, latency, packet loss and others to content with. Plus, the data rate of uncompressed video streams was usually found only in enterprise data centers. A twenty-four camera UHD mobile unit can have an aggregate of 288Gb/s of data feeding the production switcher.

There are several solutions to the carriage of video over IP, standardized and proprietary, but SMPTE ST 2022-6 received some traction. It was, though, just the old SDI formatted data rejigged for IP. It is ST2110 that finally breaks way from the past. Apart from the obvious shift to use regular IT equipment, video IP also breaks way from the link between data rate and line speed. 3Gb/s SDI carries 3Gb/s of data. 3Gb/s of ST2110 data can be carried by 10GbE, 25GbE or even 100GbE. This flexibility not only allows video to use regular IT circuits but also allows for the same switching infrastructure to carry 1.5G HD, 12Gb UHD and higher data rates as we move to 8K video.

A year ago at IBC, some of this was an aspiration, but now with sterling work from the SMPTE, AMWA, AIMS and VSF, it is a reality. The 2017 IP Showcase was no longer a science experiment, but real equipment from multiple vendors interoperating. While much was developed using the pending standard 2110, now with the publication of the standard broadcasters can move forward with the migration from SDI. Already some pioneers have systems on air, especially in the truck domain, where the self-contained nature of the projects lends itself to the trial of new technology. This has coincided with the increasing demand for UHD production facilities, you could say that video over IP has arrived at just the right time.

ST 2110 defines the transport layer, but as systems builders have found, IP is not just a shoe-in for SDI. Many other issues must be resolved and standardized before plugging up an IP system becomes as simple as SDI. We are on a path detailed by the Joint Task Force on Networked Media (JT-MN) roadmap that includes automated resource management and virtualization. That road truly leads us to a “cloud-ready” state.

In a show of ongoing collaboration among its members and with other industry bodies, AIMS will participate in several activities at IBC 2017 that will highlight progress in the march toward uniform IP interoperability.

As part of the continuing promotion of IP solutions for broadcasters and media companies, the Alliance for IP Media Solutions (AIMS) is presenting the IP Showcase at this year’s IBC. The Broadcast Bridge talked to chairman of the AIMS b…