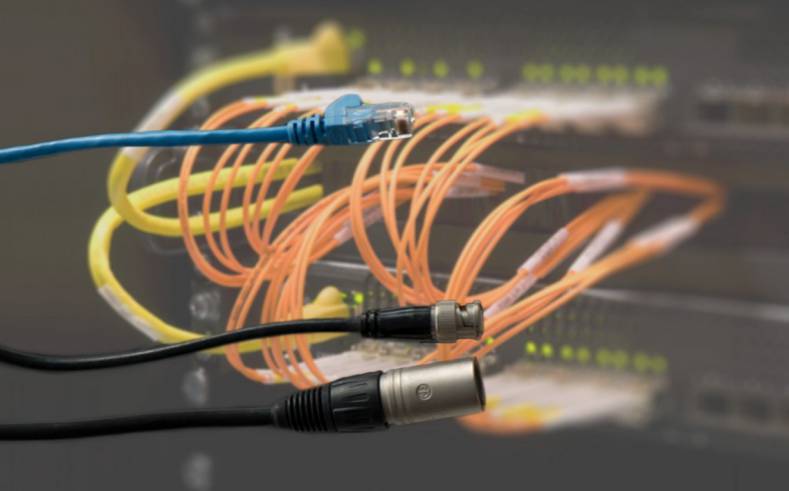 Our familiar BNC and XLR connectors look to be on borrowed time.

Looking through all the sub-categories of this primary category, they are predominately covering equipment that uses the SDI interface. The standard dates back to the 1980s, and has served the needs of the broadcast industry for nearly three decades. Over that periods advances have upped the data rate from 243 and 270 Mb/s through1.5Gb/s to 3Gb/s. 6 and 12Gb/s are the next logical steps for 4K 4:4:4 support. However, the much-vaunted move to IP has rather stalled the market. System builders looking to build 4K and UHD platforms are presented with several options in the IP camp—AIMS ASPEN, NDI, NMI and all that. 2016 is not a good year to make planning decisions with the uncertainty as to which standards win out.

Meanwhile the show must go on. Some program genres are champing at the bit for UHD, notably sports and movies. Now, movies are generally VOD but handled as files, but sports programming must be real-time. The workaround is for UHD processing equipment to be linked with four 3G-SDI links.

SDI was developed back in the days when LCDs were small monochrome numeric displays. The CRT was the only video display technology for production and consumers. This heritage shows. SDI includes support for blanking, the time for the flying spot of the CRT to retrace back to the beginning of a line or to from the bottom to top the screen. OK it’s dressed up as ancillary data, and used to embed audio, but at the end of the day, it’s a digital version of analog video for CRT displays. And let’s not get into gamma. Why is black lifted up to level 16? That goes back to analog sync pulses. Surely, its time to move on now the CRT has become a museum piece.

It’s not the first time broadcasters have faced such a transition. The move from analog to digital rendered their existing infrastructure as obsolete, just a pile of scrap. Such moves call for smart business minds to manage the changeover.

This time it is different. There are other ways. Many broadcasters outsource to technology service providers, so the problem become someone else's. When broadcasters went digital, it was to more broadcast-specific equipment, only digital rather than analog. Now one option is all-IP on commodity IT platforms. The maths changes; the business case changes.

IT platforms have an inherent agility and flexibility. If VR takes off and some new format is needed— fine—just update the software.

The purpose-built hardware platforms are just not that flexible. Sure you can have programmable logic, FPGAs, but for some step change in the requirement they may just not be configurable. Whereas software running in a virtualized environment can just adapt and expand to meet the requirement that was never envisaged back when an FPGA was soldered to a board.

Am I saying that hardware has no future? I guess so. The big question is how long will the changeover take?

Hardware will remain in some areas: the control panel, the human interface. These remain expensive items to manufacture, and are likely to remain so until artificial intelligence replaces the technical director, and decides when to cut between cameras.

The broadcast hardware business faces a shrinking market, but in a technology business things change. The big question is how long is the transition to IT platforms going to take?

It’s going to be a shame to see the end of the BNC connector. It looks professional alongside the plasticity RJ-45. It looks like it was designed to be rugged, rather than for minimum cost. Designed around 1950 as a military-grade connector, it became the primary connector for analog video. It survived the transition to digital, becoming the SDI connector, retaining the 75ohm impedance of analog. The BNC is very quick to terminate. A wireman with a coaxial cable stripping machine can fly through a bunch of cables in no time at all. In comparison, the RJ-45 looks like it was specially designed to be fiddly to terminate. The XLR too is a great, rugged connector. Not so quick to terminate, but you can drive a truck over it. But one can’t get hung up over connectors.