The report is presented in four sections, each corresponding to a specific technology trend or challenge, as well as a concluding section with additional findings. The complete Imagine Communications “2016 Focus Forward Technology Trends Report” is available at this link.

While much of the water fountain talk among engineers is focused on the SDI to IP transition, the other three technologies discussed in the report are closely allied, some would say dependent upon, a successful move to an IP-centric environment. One advertising banner at 2014 IBC said, “SDI is dead”. This report however suggests SDI is not dead, but its usage may decline over a period from two to 10 years.

Let’s skim a bit of the report’s data to see what broadcasters and production professionals really think. To better appreciate the trends identified, you will need to read the entire report. Keep in mind that the survey authors have a viewpoint and it may be expressed in the interpretation of the results. 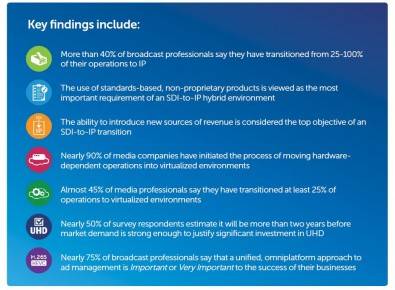 Change is cultural not technical

Broadcasters have for years claimed that IT engineers didn’t “get” video or television broadcasting. I recall a hysterical training video that examined this issue. It shows a broadcast person running the production switcher and an IT guy holding a laptop and in charge of distribution. When the broadcast link develops trouble, the IT expert suggests simply “rebooting” the system to see if that will fix the problem. Naturally, the broadcaster was pulling his hair out over that solution.

Survey respondents were about equally divided on whether the biggest challenge to overcome is cultural, ie acquiring new skill sets and increased integration into the organization’s IT practice, or simply technological.

Speaking on a panel at NAB 2015, then-Disney/ABC Television Group CTO Vince Roberts suggested that an evolving workplace was a bigger obstacle to overcome than the imposition of new technology. “A lot of what we had to do was socialize why big iron was no longer necessary,” said Roberts, referring to Disney/ABC’s transition of playout and other functions to an IT-based infrastructure. “That was more of a cultural challenge than a technical one.”

Surprising to me was that engineering respondents saw the culture versus technology challenge at about the same percentage as the entire survey population.

Recall the phrase, “It depends on what the meaning of the word 'is' is.”? Words mean things and definitions are important. So while 22-percent of the respondents claimed that zero-percent of their operations had transitioned from SDI to IP operations, by definition, a “file-based workflow” is an IP-centric operation. It is unlikely that almost one-quarter of these media professionals claiming no IP operations are not using some form of file-based tool in their work.

The report notes that media professionals may disregard file-based workflows as part of the IP transition. Broadcasters and other media companies strongly associate the move to IP more with the processing, transport or playout of live/linear video and audio streams than moving files around, say for video editing.

One often declared reason to not implement IP was that the required puzzle pieces were not available. But when the survey asked about concerns over transitioning to IP, cost was the number one factor mentioned. Number two on the list of concerns was the potential for disruption in operations. While an IT professional might be proud of four nines up time in a system, a broadcast chief engineer might be fired for that level of on-air performance.

Survey authors say these results likely indicate neither enthusiasm nor anxiousness over moving operations to IT environments. Rather, that because media professionals are largely unfamiliar with IT-based operations and they may not yet see the approaching fusion of IT and media operations as delivering sufficient benefits or as raising significant concerns. Perhaps there is a simpler way to parse the hesitancy by broadcasters to move toward IP operations. It could be a, “If it isn’t broke, don’t fix it" mindset.

As mentioned earlier, manufacturers are entitled to a viewpoint. After all, companies invest in R&D so they can build and sell products to users. If a survey is useful in guiding technology and business decisions, so be it.

These six options were the only choices from which survey respondents could select regarding a hybrid SDI/IP transition environment.

One section of the report does appear to be a bit “advertorial”. Imagine Communications is a member of the AIMS (Alliance for IP Media Solutions) trade association. Some of the survey’s results could be interpreted in such a way as supporting AIMS. Or, AIMS' objectives may reflect exactly what survey users want. Here is how the report compares some survey results to the goals of AIMS.

“These findings also validate the significance of the December 2015 founding of the Alliance for IP Media Solutions (AIMS), a trade association dedicated to advancing the adoption of industry standards for the transmission of video, audio and ancillary information over an IP infrastructure, as well as products based on those standards. AIMS works with industry standards organizations, including the Video Services Forum (VSF), the Society of Motion Picture and Television Engineers (SMPTE) and the European Broadcasting Union (EBU), to facilitate the industry’s transition from SDI to IP through interoperable solutions that enable the rapid evolution to open, agile and versatile production environments…. Surprisingly, the vast majority of survey respondents did not identify the ability to facilitate an SDI-IP transition on a self-controlled timetable as an important characteristic of a hybrid transition strategy.”

The remaining portion of the report examines several other important technical and operational themes.

Most interesting to engineers may be the report’s discussion about the HD to UHD conversion. Left unsaid was any discussion about the elephant in the room problem—delivery of UHD. ATSC 3.0 can remedy that challenge, but that implementation will be tied by stations to requirements resulting from the spectrum auction and FCC action.

Of course, Imagine Communications spun off the RF division, now called GatesAir, so check with that company for answers on the RF issues.

The Imagine Communications’ “2016 Focus Forward Technology Trends Report” is a good read and represents a significant signpost about how industry media professionals view IT-centric technology and its implementation. The Broadcast Bridge recommends you read the report. It provides some clarity that, until now, has been mostly water cooler chat.

The Imagine Communications 2016 Focus Forward Technology Trends Report is available at this link.