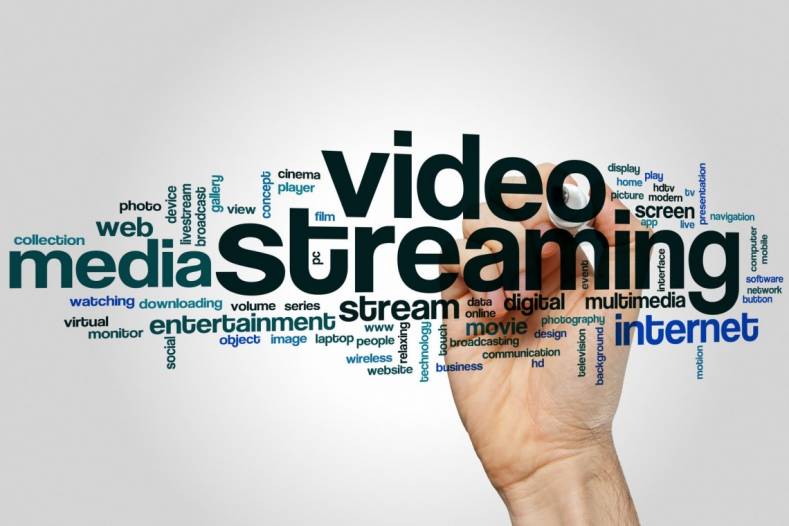 Video streaming is the visible part of IP technology entering the media space.

A PR executive asked me this week, “… is streaming is considered broadcast…?” At first I was taken aback at getting such a question from an industry person. My response was “You bet!” I then asked myself, why that would even be a question.

Maybe streaming was not broadcast in the traditional way ten more years ago, but today’s streaming platforms serve millions of viewers. That alone qualifies it as broadcast in my mind.

With the expansion of entertainment display devices including cell phones, tablets and laptops, there has been a supportive increase in media sources. How many movie-streaming companies can you name? Netflix, HULU, Amazon Prime, Xbox Video, Sony Entertainment Video Unlimited, iTunes, Google Play Movies, Viewster, QuickFlix and AnimeHere were displayed in one internet search result. There are many more.

A common link for this streaming technology is that today’s viewers expect to be able to access their content anytime, anywhere and on all of their devices. If you, as a broadcaster, service only one screen, you may be missing a potentially huge audience.

Much of this accepted viewpoint lies in the raison d'être for ATSC 3.0. Without an IP delivery platform, most screens are beyond the reach of traditional OTA broadcasts. Fortunately, wiser minds understood this and the result is a path forward in the form of a new broadcast format.

With that as background, where else is IP technology leading this industry?

A recent report published by Ooyala lists five key IP video trends. The first trend is  increased viewing on portable devices, which creates a new and expanded demand for non-traditional content. Whether that content involves more live events or interactivity, such programming would not have been possible only a few years ago.

These pressures, and opportunities, are forcing content creators to try new production methods. Sometimes that may be simply the use of smaller and less-expensive cameras. Alternatively, it also could involve the use of advanced technology like slo-mo equipment capable of 10 to tens of thousands of fps.

Admit it; you have watched the YouTube slo-motion videos of exploding water balloons or other slo-motion destruction, right? Recording events that take place far too rapidly for the eye to see, Gavin Free and Dan Gruchy developed quite a following on their YouTube channel, The Slow Mo Guys. They have almost 10 million subscribers at the last check. 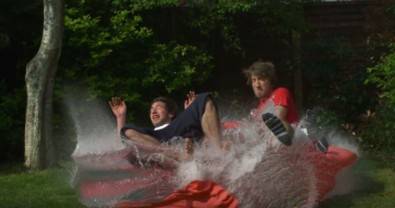 YouTube provides content on virtually every subject. This image comes from The Slow Mo Guys channel where two guys explore the previously unseen imagery of rapid-pace events, like explosions, through the lens of a high-speed camera.

Of course, these two producers use an expensive slo-mo camera for capture and free YouTube distribution. The key to them making money is the interactivity and massive viewership.

This is tangential to the the number one IP video trend; viewers want to be able to interact with the content. Facebook, Snapchat and all the social media sites enable view/participant interaction. IP enables interactivity with media.

The future will require that program producers and distribution channels enable two-way interactivity to boost viewer immersion, participation and monetization.

The number two IP video trend, according to the Ooyala report, content makers can leverage global IP video services to access untapped revenue. Sporting leagues including football, baseball, soccer, tennis, racing and others produce short-form content for distribution to partners around the world. This allows content owners to tap into new markets with inexpensive, timely clips, highlights or analyst commentary.

The third trend is that live TV is not dying, rather moving to connected devices. Again, this shows the viewers’ desire for their content anywhere anytime on their devices. The rise of Periscope, Facebook Live, and other live streaming apps has raised consumer awareness of and appetite for live content on connected devices. Several companies have joined DISH Network, AT&T, Sky, and Sony in offering online pay-TV services.

The viewers’ shift in consumption to online sources for live content will continue. IP-based delivery allows people to watch live news, sports, and other programming with the same freedom that they watch VOD today. The shift will be particularly significant in countries with limited infrastructure, where mobile networks will be the primary alternative for live content other than over-the-air or satellite-based broadcasting.

One caveat is that the OTT video services must be able to quickly scale to the audience size. Witness the delay, outages, non-delivery and huge number of viewer complaints about transmission problems of the recent Floyd Mayweather Jr vs. Conor McGregor, boxing match. While viewers may allow regular OTT delivery services some slack in terms of quality, when one pays hard cash up front, streaming video must be as high quality and reliable as over-the-air television. The streaming industry has much to do in this regard.

The fourth IP video trend is made-for streaming, new and diverse content targeted at streaming audiences. While this relates to the first video trend, the Ooyala report mentions Virtual Reality as an yet-untapped example.

Other made-for streaming content includes repackaged clips of comedy and news segments. The Fox News Network, and others, leverage regular programs with expanded, on-line only, versions. The premium show ends, but continues for another period in a streamed version. Such repackaged and extended content comes with little additional cost. 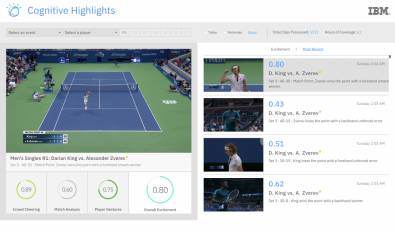 IBM iX, Cognitive Highlights can identify the match’s most important moments by analyzing the statistical tennis data, sounds from the crowd and the reactions of a player using both action and facial expression recognition. The system then ranks the shots from seven US Open courts and auto-curates the highlights, which simplifies the video production process and ultimately positions the USTA team to scale and accelerate the creation of cognitive highlight packages. Click to enlarge. Image IBM.

The last IP video trend outlined in the study should be no surprise, artificial intelligence (AI). While this report emphasizes using AI to addressing unique viewer needs, I believe AI first will be applied to traditional production media tasks like storage, smart editing and enhancing the data that accompanies video.

As an example of AI, IBM used its new IBM Watson Media solution at this week's US Open Tennis tournament.The tennis matches were 'viewed' by Watson, which then generated data about key components of the match. They included;

The US Open will use one of the first solutions available through IBM Watson Media called Cognitive Highlights. Developed at IBM Research with IBM iX, Cognitive Highlights can identify the match’s most important moments by analyzing the statistical tennis data, sounds from the crowd and the reactions of a player using both action and facial expression recognition. The system then ranks the shots from seven US Open courts and auto-curates the highlights, which simplifies the video production process and ultimately positions the USTA team to scale and accelerate the creation of cognitive highlight packages.

IBM says the platform can deliver relevant content and ads to consumers, as well as expedite video editing. IBM Watson Media services can increase the number of monetization opportunities and the value of content libraries, according to a press release.

The Ooyala study, conducted by Parks Associates, concludes with several bullet points, two of which captured my attention.

Content producers have billions of dollars invested in the current equipment and tools necessary to produce great content, particularly for TV and movies. Beyond cameras, the change includes everything from new cabling to new editing software.

While software systems can be adapted to minimize training, current employees will have to come up to speed or change roles in order to leverage new features and capabilities. Retraining or adding new people can meet with internal resistance. For example, Fox Sports’ ongoing shift to premium video content has resulted in hiring of new video-oriented production employees and layoffs among its writing staff.

The 5 IP Video Trends, report offers insights into where IP video is important and offers general suggestions. For the most part, I agree. IP video solutions are the future and media production will be IP-centric.

With that said, I predict that for the above two study conclusions alone, the IP video transition will not occur as fast as vendors would like, and the transition will be more expensive than their customers want.

The complete Ooyala research report, “Top 5 Video Trends in an IP-based World,” is available at this link.

Note: Portions of this commentary represent the viewpoint of the author and not of Ooyala or Parks Associates.

Making IP work in a broadcast facility is an engineering problem to be solved. Understanding why we need IP in the first place requires deep understanding of the business benefits.