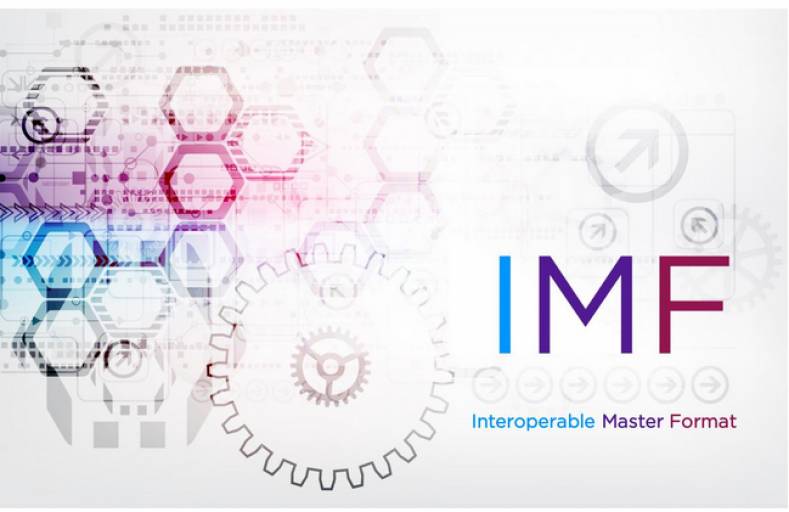 SMPTE and the Digital Production Partnership (DPP) co-developed the current IMF spec to accommodate a variety of automated workflows.

In an effort to make the most of their significant content investments, major network broadcasters and content distributors are increasingly expanding their worldwide reach and sending a single piece of content to multiple outlets simultaneously. However, this global strategy is fraught with complex transcoding and the processing of sometimes dozens of files related to that single movie or TV series.

Recognizing this problem, SMPTE has established a standard to address this called the Interoperable Master Format (IMF), which provides a series of application scenarios on how to create a single, interchangeable master file format and structure for the distribution of content around the world.

Based on the existing Digital Cinema Package (DCP) architecture, which is used by movie studios to distribute their content, SMPTE says IMF provides a framework for creating a true file-based final master. It provides media organizations with a master format for creating multiple tailored versions of the same piece of content for different audiences. It allows distribution of unique versions, such as a Spanish language version, a French version, an airline version, and numerous others elements that can make content illegal to watch in some parts of the world.

At the 2018 IBC Show in September, several vendors showed products that support IMF, prompted by recent delivery specification demands from major OTT platforms like Netflix and broadcasters like Walt Disney/ABC. Apple, too, has put out its own recommended disclosure document that requires content for its iTunes streaming service to be delivered in IMF but processed in the ProRes compression format. These vendors at IBC included Avid, BlackMagic Design, Dalet, EditShare, Ooyala, Signiant, Sony, Tedial,Telestream, Tektronix, which have all stated increased interest among their respective customers for IMF-compatible technology. 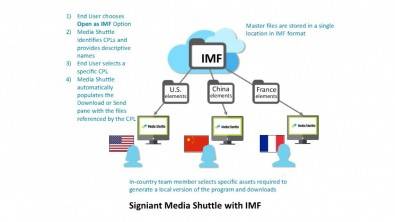 “Netflix had a lot to do with [the recent increase in demand for IMF],” said Rick Clarkson, Chief Strategy Officer at storage management systems provider Signiant. “They are a big proponent of this and when Netflix gets behind something in this business, people pay attention.”

Also at IBC, SMPTE (in association with the Digital Production Partnership) announced the publication of a new IMF specification for the mastering and international exchange of content for broadcast and online, called SMPTE TSP 2121:2018 IMF Application DPP, for ProRes workflows.

The need for IMF is clear. For example, a widely distributed major motion picture may require dozens of different versions in order to support multiple market segments such as airlines, VOD providers, promo spots, or an edit for cable television. IMF eliminates the need to create a dozen plus master copies by separating each market requirement into individual “component formulas” (known as a Composition Play List, or CPL) that references the available essence components (namely MXF media files) included in an IMF package. Individual CPLs are used to create versions based on the master essence components for each of the differing market audiences.

Therefore, IMF is not made up as a single file. It is a standard specifying individual components that together create a complete IMF package. This package could include: Video essence (J2K up to UHD);Audio essence (24bit uncompressed, any number of channels);Data essence (subtitles and captioning using IMSC Timed Text); and Dynamic metadata (metadata changes over time).

The CPL is an easily readable XML file, similar to an Edit Decision List, that references track files via a Universal Unique Identifier (UUID)—as opposed to binary files that are not readable by humans.

The UUID is a 128-bit number used to identify information in computer systems. The problem is this can result in file names that are extremely long and cumbersome, so users have had to create their own unique naming systems to make file retrieval faster.

This diagram shows how an IMF package is prepared for Netflix content distribution across the globe with Telestream's Vantage product.

Signiant showed its Media Shuttle storage management system at the IBC Show, with new support for the IMF format. This SaaS platform combines Signiant's network optimization technology with a global control framework for the exchange of media. Media Shuttle’s new ‘IMF Aware’ functionality streamlines IMF workflows by simplifying the process of accessing the assets required for the creation of a specific version.

Clarkson said that its customers have been moving IMF content around for at least two years, but they’ve said IMF is not very user friendly. That’s in terms of the way the files are named and the way the IMF packages are put together.

“The entire IMF package is based on the CPL,” he said. “What our customers have found is that the multiple files names are long and they don't sense. It’s hard to find things in a large database. So, we did things within our Media Shuttle SaaS product that makes it easier to find things among the storage arrays. It generates more human-readable file names. We call it ‘IMF Aware’.”

Media Shuttle users choose a folder and see it as an IMF package. All of the CPLs are listed in the folder with temporary “user-friendly” descriptive file names. The user selects the CPL and the system is automatically populated, whether that is a download or an upload, with all of the files related to that specific CPL.

“The user doesn’t have to search around and find the files,” Clarkson said. “We give them descriptive files names so you can look them up easily and see exactly what’s in there. So, it makes it easier to use."

Telestream’s Vantage is a software-based media-processing platform that has supported IMF since its beginnings, according to Shawn Carnahan, CTO at Telesteam. With its various tools for ingest, edit, transcode, QC, packaging, and distribution, it currently supports the SMPTE Application #2 identifier to address two common multiple platform production workflows.

“If you are a content distributor, and you're feeding IMF packages, at some point you need to turn that into something that can be viewed,” Carnahan said. “If you are using the IMF package as a source then you want to transcode it to a common AVR set of resolutions and bit rates for OTT delivery. So we need to take that package and a specific CPL from that package and render that so it can then be converted to whatever the required output format is.

“The second workflow is for content providers,” he added. “You need to produce assets in the IMF format, starting with something coming out of editorial. So a common workflow is you’re on Final Cut and you’re creating your final edit master and it’s in ProRes. So you have to transcode each of the essence files into the appropriate formats and then package that up for delivery.”

Ooyala is another company that provides software and solutions to optimize the production, distribution and monetization of media. At IBC it showed support for IMF-centric workflows across all stages of the content supply chain, including digital video playout. Among other features, the Ooyala Flex Media Platform now natively supports the receipt of Interoperable Master Packages (IMPs) and transcodes them into renditions required for streaming to customer devices.

Tedial showed new features for its Hyper IMF, a MAM solution that supports IMF formats for ingest, archive and delivery, will be demonstrated with a host of new features that significantly improve the content delivery and management to non-linear platforms by providing assembly-on-the-fly. HYPER IMF includes automatic leader insertion, which incorporates all the elements required for each platform (e.g. bars/clock etc.). The platform also features automatic localization based on delivery profile. This allows all credits and text insertions for every language required to be added automatically. Prior to Hyper IMF, broadcasters had to manually enter this data or create complex code for every destination, which is a costly and time-consuming process.

“If you look at IMF and what’s it’s good for, the industry has had a problem for years where content is duplicated and duplicated, stuff gets lost and there’s so many version of a project laying around,” Signiant’s Clarkson said. “It’s shocking to me that it’s taken this long for the industry to get behind IMF and put it into their workflows.”

“SMPTE has done a good job of providing for a wide variety of usage applications,” Telestream’s Harnahan said. “I think there will never be just one variant of IMF. There will be application specs for delivery in ProRes, DNx, and XDCAM, to name a few popular ones. So, going forward we'll see a lot of new vendors specs driven by large content contributors or consumers. We’re building workflows to not only make the appropriate media assets but also to generate the correct metadata for each specific provider.”

As more distribution platforms become available to broadcasters and content distributors, there will be additional files types that will need to be generated and managed. The SMPTE IMF spec, with more than 30 defined applications (and counting), is designed to do just that. Content providers need to be aware of IMF and how it can help streamline the delivery of projects destined for global distribution. 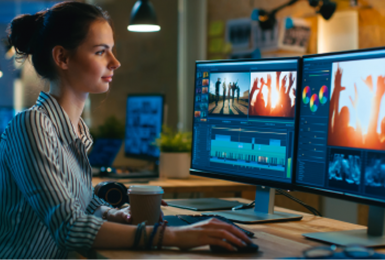 As the television business has become more global, and evolving consumer devices spawn the need for ever more formats, there has been an explosion of the number of versions that are needed for an item of content. The need to…

At the 2018 IBC Show, Signiant will demonstrate new features and functionality for its SaaS platform, which combines the company’s patented network optimization technology with a new global control framework for the rapid and reliable exchange of media.