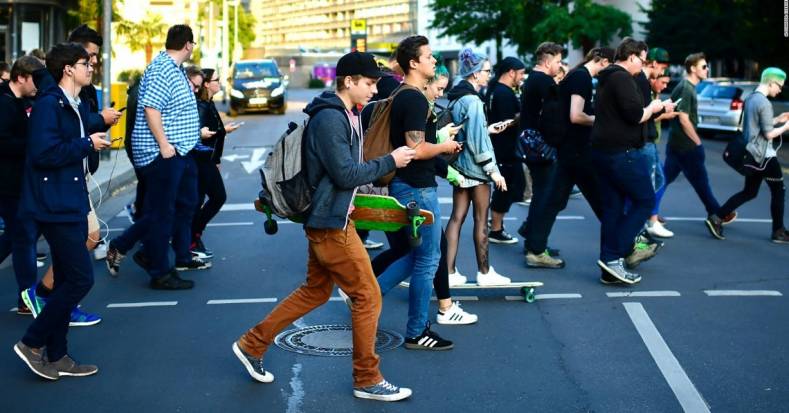 A whopping 58 percent of video viewing occurred on mobile devices throughout the world in the third quarter of 2017, says a study released by Ooyala, a California-based video metrics company.

This viewing pattern is clearly a growing global trend. Ooyala said the trend represents the sixth consecutive quarter in which mobile devices accounted for more than 50 percent of all online video starts. In fact, since 2016, mobile video viewing grew 11.9 percent.

Ooyala predicts the trend will increase. The company forecasts that more than 60 percent of all video will be viewed on mobile devices within the first half of this year. That is a dramatic increase. Viewing of long-form video grew nearly 77 percent on smartphones and nearly 70 percent for tablets in only one year.

The study found that than 366 million smartphones were shipped globally in the third quarter of last year, and the last quarter was expected to be even higher with new model phones available. This not only affects global video viewing, but puts a high quality camera in the hands of every user. 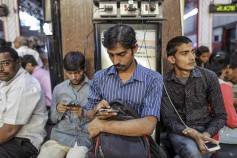 The greatest mobile activity is in Asia-Pac region, with 64 percent. The report called it the “pacesetter” for mobile video consumption. North America, now behind, is catching up quickly. However, mobile viewing is now a global trend that can seen on virtually any street in the world, where you see dozens of passers-by staring at mobile phones.

The transition from traditional to mobile TV viewing is remarkable. The study said it has been primarily been driven by consumers, while many traditional players have dragged their feet in making the same transition in the advertising space. Consumers, the report said, also have made it clear that traditional ad loads and blocks of commercials no longer cut it.

The report said change is coming, with more brands looking to non-traditional ad formats, primarily shorter ones. The change is crucial. The report quoted Brian Stempeck, chief client officer at The Trade Desk, who said “this is an opportunity to make the ad experience better. If we’re replicating TV, we’re doing it wrong.” 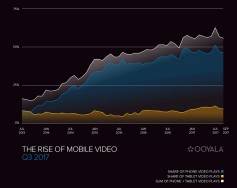 The Ooyala report confirms that mobile-device video consumption is now a global trend. Click to enlarge.

Overall, content longer than five minutes made up 61 percent of time watched on smartphones, 79percent on tablets, 99.4 percent on connected TVs and 59 percent on PCs (both desktop and laptop computers). The shift to watching any content on any device doesn’t appear to be slowing down, so the report said it is crucial that content providers be able to maximize quality delivery on all devices.

The report said mobile devices are the future of online video, embraced by younger users and by the companies that control distribution, especially in hard-to-access areas where a mobile network deployment is likely cheaper and easier than a fixed network. Making sure content is delivered as well as, if not better, on mobile devices than to traditional devices in the home will appeal to both younger users and transitioning Boomers and Gen X viewers.

“Consumers have been the leaders of this video evolution, this period of disruption, discovery and new directions. It was consumers who fueled the growth of the first “global television network,” Netflix, and it will be consumer who — eventually — make the bulk of video delivery wireless, said Ooyala’s principal analyst, Jim O’Neill.

Report: Ooyala, Metadata: The Future of Video from Concept to Consumer

The industry’s realization of the importance and value of metadata has been growing: The recent Pay-TV Innovation Forum 2017 survey from NAGRA and MTM found that the majority of pay-TV executives believed data and analytics would be crucial to the d…

Making IP work in a broadcast facility is an engineering problem to be solved. Understanding why we need IP in the first place requires deep understanding of the business benefits.