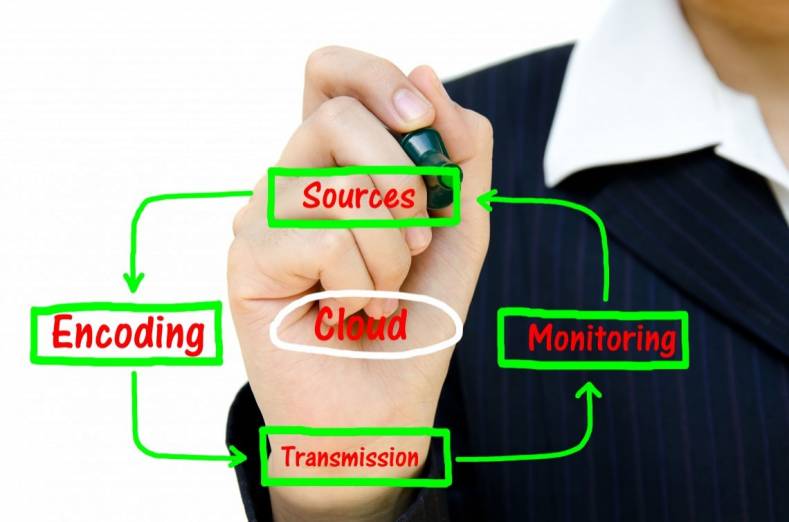 Cloud workflows. They are neither easy or simple. IT pros offer their views on moving workflows to the cloud.

One could hardly miss all the banners at IBC and NAB shouting some version of, “Get your Cloud here.” Vendors were promoting the most talked about technology since 3D. The large manufacturers have cloud-ready, IP-centric, solutions. These solutions appear sufficiently mature for first-round implementation. But, what if you don’t want serial number one of any product? What if you have decided to rely on new cloud solutions, but want the workflow to remain familiar to your staff. Is that even possible? And, will today’s cloud solution last more than a couple years?

Is today’s cloud the right choice?

Broadcasters have never been risk takers. If they had, we would already be enjoying TV-enabled mobiles, massive OTT services and a wide range of other IT-based video solutions. The fact remains, station and media facility managers are seldom willing to risk their company’s finances (and their own careers) on an unfamiliar and potentially expensive solution. Many of The Broadcast Bridge readers still put cloud solutions in this category.

The question is not does the cloud work, but rather, do today’s cloud solutions cost effectively support media workflows? And, what will those solutions ultimately cost in terms of both CAPEX and OPEX?

Let’s step back from the issue and examine two recent surveys that may provide answers to these and even some as yet unspoken questions.

A study published by SolarWinds in January, 2016, highlighted how North American IT professionals view and plan to expand their cloud solutions. The study’s results are summarized below.

Only 43%, estimate that half or more of their organizations’ total IT infrastructure will be in the cloud within the next 3-5 years.

60% say it’s unlikely that all of their organizations’ infrastructure will ever be migrated to the cloud.

Despite the hesitancy, only 9% have not migrated any of their organizations’ infrastructure to the cloud.

The number of small businesses that have not migrated anything to the cloud dropped from 18% in 2015 to just 6% in 2016. 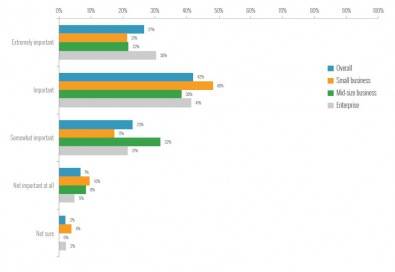 Figure 1. 92% of all survey respondents said cloud implementation was important, yet no single segment reached a 50% ranking. Click to enlarge. Source: SolarWinds 2016 North American IT survey.

*Note: "Hybrid" represents infrastructures that have evolved from traditional on-premises-only to a hybrid strategy that links internal and external services driven by the existence of the cloud.

2) The need to support legacy systems

Top three areas of infrastructure already migrated to the cloud

27% of survey respondents are certain their IT organizations currently have adequate resources to manage a hybrid IT environment. (SolarWinds 2016 North American IT survey.)

1) Hybrid IT monitoring/management tools and metrics

It is important to acknowledge that this survey did not break out media focused facility responses. While not mentioned in the survey, it is likely that most of the respondents were not broadcasters.Keep this in mind with evaluating these results.

This cloud study, by RightScale, looked at the where facilities “are” today with respect to cloud adoption. The study, considered the responses of more than one-thousand technical professions across a broad cross-section of organizations. Questions focused on “the adoption of cloud computing.” This study did include media facilities, although it was a small portion of total respondents.

2) 82 percent of enterprises have a hybrid cloud strategy, holding steady from 2015.

3) 95 percent of organizations surveyed are running applications or experimenting with infrastructure-as-a-service. 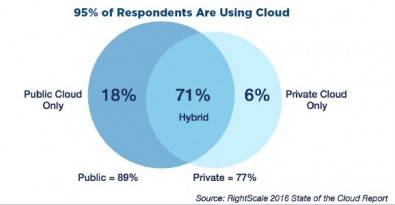 Figure 2. The use of hybrid cloud environments has grown to 71 percent. Measured overall, 95 percent of respondents are now using cloud up from 93 percent in 2015. Click to enlarge. Source: RightScale State of the Cloud Report.

There is no “one cloud”

1) Cloud users are running applications in an average of 1.5 public clouds and 1.7 private clouds.

2) They are experimenting with an additional 1.5 public clouds and 1.3 private clouds.

5) Private cloud showed even stronger growth with 31 percent of enterprises running more than 1,000 VMs, up from 22 percent in 2015. 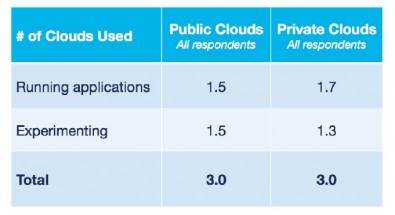 Figure 3. More enterprise workloads moved to both public and private cloud over the last year. Click to enlarge. Source: RightScale 2016 State of the Cloud Report. 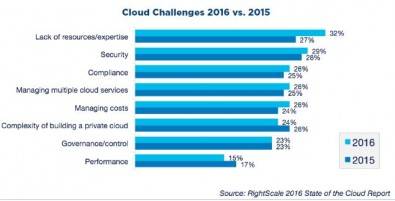 Figure 4. For the first time in the RightScale survey, security is no longer the top issue. Today it is a lack of resources and expertise. Click to enlarge. Source: RightScale State of the Cloud Report.

Cloud challenges: Security is no longer the top issue

Lack of resources/expertise increased from 27 percent last year to 32 percent this year to supplant security as the largest concern. As more organizations are placing more workloads in the cloud, the need for expertise has grown. Additional training of IT and development staff will be critical to helping address this challenge.

1) A lack of resources/expertise is now the number one cloud challenge (32 percent), supplanting security (29 percent).

2) Even the most security conscious respondents — enterprise central IT teams and security pros— no longer see security as the number one issue.

1) 26 percent of respondents identify cloud cost management as a significant challenge. This task show is a steady increase in importance each year, up from 18 percent in 2013.

2) Cloud cost management provides a significant opportunity for savings, because few companies are taking critical actions to optimize cloud costs, such as shutting down unused workloads or selecting lower-cost clouds or regions. 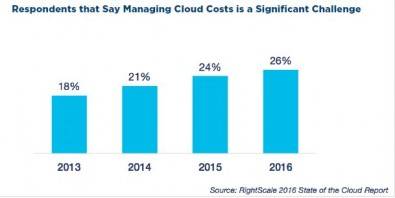 Figure 5.The most common optimization action is monitoring utilization and rightsizing instances (reserving server capacity). 36 percent of SMBs are purchasing AWS Reserved Instances (RIs) to save money, but only 21 percent are tracking purchased RIs to make sure that they are being fully utilized. When purchased RIs are not fully used, the savings decline, and the RI can end up costing more than on-demand instances. Source: RightScale State of the Cloud Report.

In 2016, more cloud users reported speed benefits from cloud. The two benefits that had the largest increase were faster access to infrastructure, which grew from 57 to 62 percent, and faster time-to market, which grew from 48 to 52 percent. 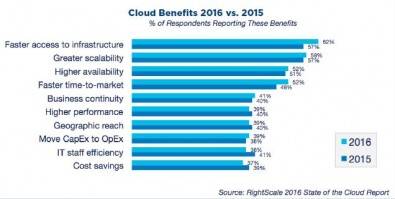 Figure 6. The RightScale 2016 survey shows that the most common benefit from moving to cloud operations was faster access to infrastructure. The least common benefit was cost savings, which actually went down from 2015 to 2016. Click to enlarge. Source RightScale State of the Cloud Report .

Amazon and Microsoft are the two largest providers of cloud services. Overall, AWS is used by 57 percent of respondents, flat from last year. Enterprise adoption of AWS grew from 50 percent to 56 percent while adoption by smaller businesses fell slightly from 61 percent to 58 percent.

Azure IaaS grew strongly from 12 percent to 17 percent adoption, while Azure PaaS grows from 9 percent to 13 percent. Combined, 20 percent of respondents use Azure as compared to 57 percent for AWS.

Figure 7. Amazon leads the marketplace in size, but new competitors gain from additional cloud demands. Cloud computing services are commonly referred to as Software as a Service (SaaS), Platform as a Service (PaaS) and Infrastructure as a Service (IaaS). Source: RightScale State of the Cloud Report.

Is it time to move to the cloud?

Cloud solutions are being used in media workflow and that usage will increase going forward. Even so, the cloud is not, as some vendors claim, a sure fire way to reduce costs. Moving to the cloud creates an entirely new cost-accounting task. When combined with the biggest challenge, according to this survey, as not having sufficient trained staff, cloud adopters will need to reassign resources to control those costs. See Figures 4 and 5 above. Consider that if the IT pros find it hard to manage cloud costs, how much harder might it be for a video staff?

Buyers of cloud solutions should ensure their vendors will provide sufficient support in the early months of moving media workflow to the cloud. And, that support will have to continue until the in-house staff is sufficiently experienced on cloud workflows.

There is much more to discuss about using cloud for media and broadcast. Respond with your thoughts in the box below. Got a question about cloud usage? We’ll ask our experts for a response. 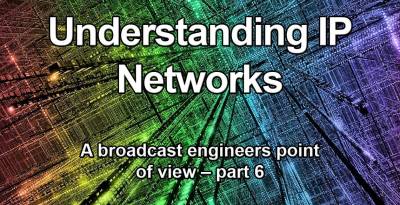 In the last article we looked at how a network can duplicate IP packets to perform efficient audio and video stream distribution using multicasting. In this article we continue the theme of looking at a network from a broadcast engineers’ p…