Apple's GarageBand is good solution for beginners. It is a stripped down version of Apple’s full-blown DAW, Logic Pro, which costs $300.

Digital Audio Workstations (DAWs) are now everywhere — ranging in cost from free of charge to the sky is the limit. But which DAW is right for your application? It can be a difficult question, especially because cost has little to do with the right choice. Here are some thoughts on the subject of DAWs.

In terms of audio quality, there is very little difference in today’s DAWs. It used to not be that way, but virtually all major software for audio recording is now able to sample using at least 32-bit floating point calculations. It doesn’t matter that you understand what this means, but the important thing is most name brand audio software will deliver excellent sound quality.

The real issue today is to choose software that fits the job you need to do. If you are editing a video documentary, determine if your video editing software can handle your audio. If not, use a complementary audio DAW with the video editor. Check it out and make sure it works in advance. Test the workflow before you begin the actual project.

If it’s music that you are recording, there are many DAWs to choose from. This begins with Apple’s GarageBand, which comes free with every Mac and is a terrific app for beginners. It is a basic, simple to use, stripped down version of Apple’s full-blown DAW, Logic Pro, which is priced at just under $300.

Logic Pro competes with Ableton Live and Steinberg’s Cubase. Ableton Live was initially designed for live use, but has developed into a popular DAW for musicians, as has Cubase. Steinberg has continually developed Cubase, adding a cloud collaboration service, called VST Transit, that easily allows musicians to work collaborative projects long distances from each other. They can upload audio and MIDI tracks to the cloud in order to work together. VST Connect SE allows them to see each other via video while working.

Then there’s Reaper, which starts at only $60, but allows customization through scripts, skins, hot-keys and other add-ons. It has support for thousands of third-party plug-in effects and virtual instruments, including VST, VST3, AU, DX and JS. For users into multichannel and virtual reality sound design, Reaper offers a free Ambisonic Toolkit plugin which enables 360-degree sound design with ease.

Reaper can also be adapted to video and has a full, flexible feature set that has found a home in commercial and home studios, broadcast stations, location recording, education, science and research, sound design and game development applications.

A newer DAW is Studio One from PreSonus. It’s among the latest music DAWs, but it has become a serious contender with a lot of major users. PreSonus is working with several third-party developers to provide a suite of instruments — including Melodyne — and bundled effects in the package. Studio One, in several versions, is cost effective and quickly becoming a major player. Not everyone needs the large number of tracks used by music-oriented DAWs. When you move past music specific DAWs, there are specialty applications. One is Hindenburg Systems, makers of specialized audio software for radio journalists, broadcast stations, audio book publishers and educational institutions. It ranges in price from $95 to $375.00. There’s even a Hindenburg Field Recorder ($29.99) for mobile reporters using iPhones.

With a Hindenburg Journalist DAW on a laptop, a reporter can record, edit and share audio from the field. Interviews can be recorded on multiple tracks with automatic levels and built-in loudness meters. A voice profiler sets an automatic EQ for the sound of each voice, and noise reduction reduces hiss and hum. It is quite a compelling package. The tracks can be split into multiple audio clips that can be dragged independently of each other. Audio Unit plug-ins can be applied to individual tracks in real-time without requiring destructive editing. The software even has a repair center that allows the user to find and repair tracks with a click of the mouse. There are also denoising functions to get rid of annoying hiss in old tape recordings or of 50Hz hum picked up by a poorly insulated microphones.

Last, but certainly not least, is Avid’s Pro Tools, the industry standard in DAWs for many sound tasks, including music production. It has been around nearly 30 years and is quite refined and flexible. This is the software used at most major studios and production houses.

Pro Tools works well with a range of studio gear and complex patch bays. It is sold with a variety of hardware components that allow it to be outfitted in virtually any type of facility, including broadcasting and post-production. As the grandfather that pioneered many innovations in non-destructive computer editing, Pro Tools can do just about anything. If your task fits Pro Tools and you can afford it, it’s a no-brainer.

Be prepared, however, because Pro Tools can be costly and is proprietary. There are many variations on price, along with yearly updates and maintenance charges. But you’ll find it in every kind of facility and familiarity with it is a must if you work outside of your own production environment. 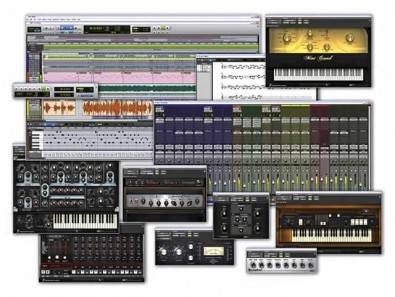 Of course, most DAWs of any size allow plug-ins that work within the app to do a variety of functions. This allows creation of a customized application tailor made for the project. There are now a vast number of plug-ins that encompass processing, auto gain riding, virtual instruments and just about everything else.

These tasks in a DAW require digital signal processing. Most of this is done by the computer the DAW software is residing on. However, some plug-ins require extra computing power. This is when a DSP accelerator is needed. These devices allow the user to run additional plug-ins without overloading the main CPU. Some are dedicated to the company’s own plug-ins, while others work on plug-ins from third parties.

Today, there are DAWs that are well suited to just about any task. DAWs that don’t have all that’s needed for a specific job can be outfitted with the right plug-ins to customize it. The trick is to assemble the right DAW to fit the job. Having a DAW with too much capability can be just as bad as not having enough, because the learning curve and extra processing required can be quite heavy.

For users unfamiliar with what’s available, speak with others doing similar work with a DAW. Ask what they use and see if the manufacturer will allow you to try the DAW before you buy. Also, be aware that many DAWs come in stripped-down “essential” versions as well as full-featured packages. Not only can you get into an essential DAW for less money, but it may have all the features needed. Later, these DAWs can be upgraded without having to entirely relearn new software.

Because a user may have what appears to be a religious devotion to a certain DAW, doesn’t mean it’s the right choice for everyone. People tend to lock on to the system they know. Those who began with Pro Tools may feel comfortable with it, though it might be overkill for what they are doing.

What matters is to fit the right DAW software to the application at hand. This way the workflow will be tighter and more efficient. Perhaps the job will get done faster without wasting time. At the end of the day, a DAW is simply a tool to make editing faster and life easier. Try to keep it that way.