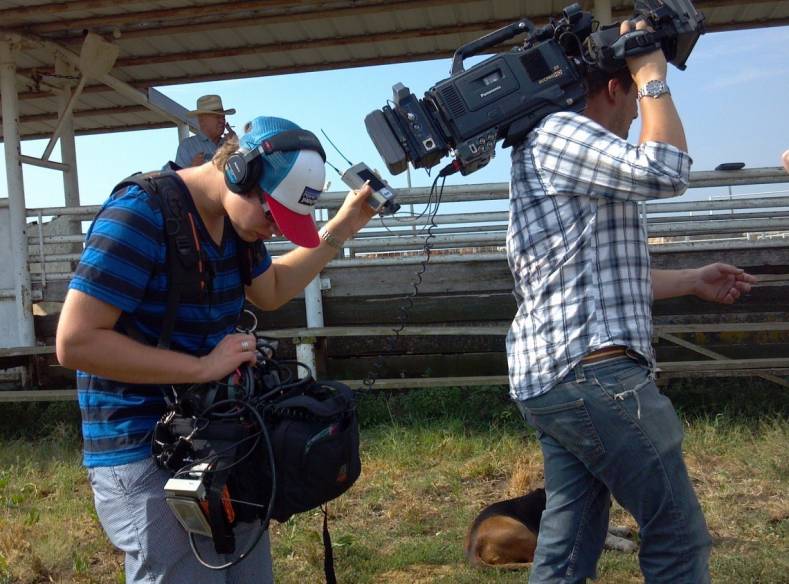 Recording stereo audio in either the field or studio not complicated and your audience will immediately notice the sound improvement.

Stereo audio more closely matches the sound humans hear with their own ears because it offers the added dimension of positioning. Unlike a single mono microphone, stereo provides the viewer sound images that correspond to the location of sounds in the scene being watched.

Microphones being used in an X-Y configuration.

Sounds that were on the left side of the screen are heard predominantly through the left speaker, while sounds on the right side are heard predominantly through the right speaker. Stereo also captures more of the subtle acoustic details from the environment where the recording was made and adds an extra dimension to the scenes being watched in television news.

In a studio — like in any enclosed space — sound waves reflect off the walls, the ceiling, the floor and other surfaces. These reflections help us form an audible impression of where we are. That’s why a recording that’s made in a locker room sounds different than a recording made in an office. Even a talk show gets an added dimensional from stereo sound, especially before a live audience.

Whenever anyone tells you stereo audio doesn’t matter for local television programming, look elsewhere for the reason. Sadly, in many local television stations, it probably more an issue of saving money than any solid reasoning.

Stereo has been with us a long, long time, being invented before the 1930s. Much research into stereo was conducted in those days by Bell Laboratories in the United States and EMI in the United Kingdom. In a white paper on stereo, Shure said that early research determined four common stereo recording techniques. All are still widely used today.

The most basic stereo technique is the spaced pair. It uses two identical microphones and places them on stands usually three to 10 feet apart. The distance will depend on the size of what’s being recorded. A spaced pair offers a very open, spacious sound because a slight delay in the sound reaching the two microphones creates an extra spaciousness that most people like. 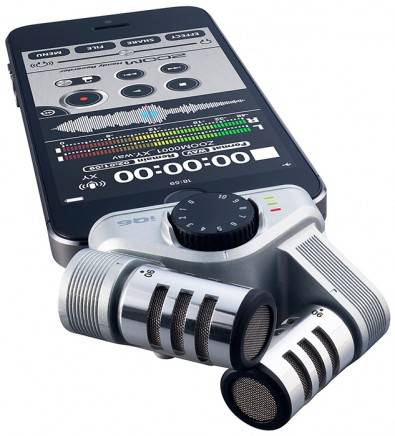 The downside, Shure wrote, is that the players in the middle of the stage sometimes don’t sound quite right because they’re being picked up by two microphones at the same time, and neither mic is directly in front of them. This can cause some tonal variations and makes it a bit harder to tell exactly where the sound is coming from, so it’s not quite as accurate.

In this arrangement, the microphones are arranged in a horizontal V, with the bottom part of the V aimed at the source. Stack them so that they are as close together as possible in a horizontal arrangement. That way, the sound arrives at each mic at the same time.

A coincident pair offers excellent positional accuracy. Because the sounds from the sides arrive at the same time, it’s very easy to tell the location of each part of the sound being recorded. The downside is you don’t get quite as much spaciousness, which can make the recording sound dry or dull depending on the acoustics of the space. 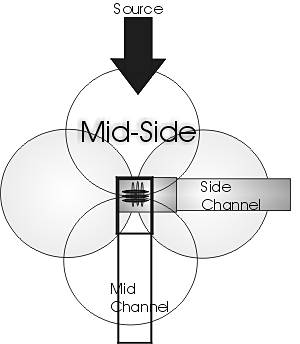 The Mid-Side microphone recording technique was devised by EMI engineer Alan Blumlein, an early pioneer of stereophonic and surround sound. Blumlein patented the technique in 1933 and used it on some of the earliest stereophonic recordings. The concept is that the mid microphone acts as a center channel, while the side microphone creates ambience and directionality by adding or subtracting information from either side. Source: Universal Audio.

The slight separation between the heads of the microphones mimics the spacing between our ears, resulting in very good positional accuracy and spaciousness.

For broadcasters, the most popular method is mid-side or M/S stereo. In this technique, a cardioid microphone called the “mid” is in the center and pointed toward the sound source. It picks up the mono sound just like any microphone would.

Then, a bi-directional mic is used for the “side” mic. Position it just under the mid mic so it’s facing left and right. The side mic picks up the ambience and positional information.

The signals from the mid and side mics go through a small matrix circuit that combines them into stereo. Because both of the microphones are at the same point in space, a mid-side recording offers excellent positional accuracy, so it’s easy for the listener to visualize where the players are in the scene.

Better yet, the width of the stereo image can be narrowed or widened after the fact. In other words, the editor can control the amount of spaciousness in post-production. This allows the sound stage to match the video shot in post, which is especially useful in television news.

Mid-side recordings can be made using two separate mics (one cardioid and one bidirectional) or one dedicated stereo mic that has two elements and the processing circuitry built in. Not only is M/S miking easy for any sound operator to record, it always plays perfectly with those using mono television sets.

Recording stereo audio is now easier than ever, especially since virtually all camcorders have several audio channels that can easily handle multiple audio tracks. Different recording methods, all proven over time, lend themselves to unique types of recording tasks.

But for television broadcasting, M/S is the easiest, the most trouble free method and affords the convenience of matching the width of the audio soundfield with the video in post production. It is proven to work, but sadly most broadcasters have never tried it.

Other recent articles by Frank Beacham:

On Using Headphones and Studio Monitors for Mixing

Frank Beacham provides a wide range of articles for The Broadcast Bridge. Sign up for a free weekly or monthly newsletter access to his and our other expert's articles.