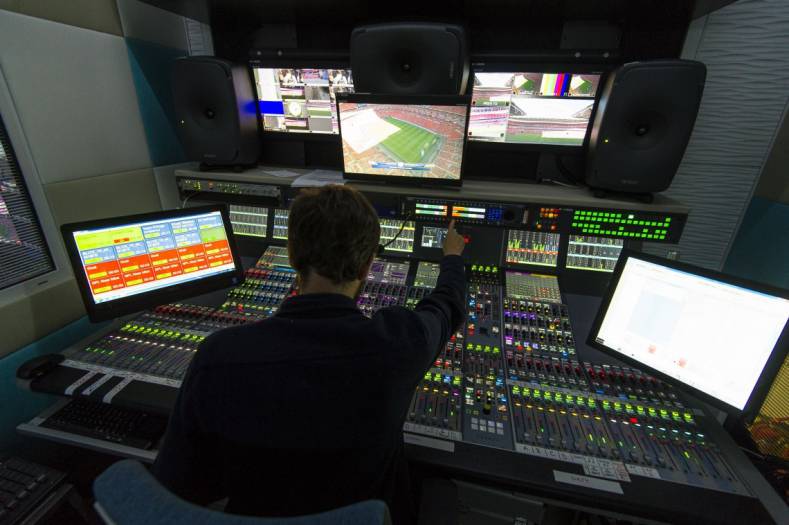 Sports audio is not bad because networks do not invest in great technology, they do. Sky Sports truck. Photo credit: Chris Lobina

Audio for sporting and other live events is challenging. Technological solutions exist. They just do not seem to be used properly.

Before anyone who works weekend football broadcasts dumps on me, hang on a minute.

I know some of the challenges you face. I used to engineer both football and basketball radio broadcasts for a Big-12 university. And I’ve done the same to a lesser degree for TV. So, I do have some background in creating an audio image of a sports event for an audience.

Today, as I was watching my local football team on TV, I became increasingly disappointed in the game audio. For me, that is not unusual as much of the audio I experience from live TV broadcasts sounds inferior.

One morning I found myself watching Republican convention coverage from Fox News. The show was being staged from an outside venue. On the set were four personalities, each equipped with a lavalier microphone. All were setting outside where they were open to the elements.

The backdrop view was great, sun, lake, trees, plenty of green grass. Unfortunately, someone failed to consider the wind.

The women’s hair continually blew into their faces and they kept having to brush it out of their eyes while on camera. And as might have been predicted, the lapel microphones picked up far more wind noise than the guests’ voices.

The show’s director must have had the sound turned off in the control room as he/she just kept the program rolling along with four people talking and the audience not hearing much of what was said. This continued for several segments, lots of wind noise and the guests’ hair blowing into their faces. Finally, during a long commercial break, someone correctly made the decision to move the guests to an inside studio.

After the break concluded, one of the hosts announced, that the show had moved inside because of the wind resulting from a local storm. My question was why did not the sound person say something about the wind before the show started? It clearly was windy from the very beginning, so don’t blame a coming storm for the lousy audio.

I then turned to CNN, which also was covering the convention. Their crew was not outside that day. Maybe the sound person had read the weather forecast earlier, telling the director, “Best stay inside today, it’s windy.”

Networks are not the only ones who can screw up the audio on a live shot.

Election coverage always brings out the “Let’s go live” mantra. Never mind that the station’s staff may stage only a couple of live events a year. This combination usually means the station has neither the equipment or training to pull off a multi-site remote broadcast without a hitch or two.

The station I typically watch, which I will not name to avoid embarrassment, placed reporters at several of the politicians’ headquarters. The goal was to keep the audience attuned to every political nuance from each location with live voice overs rotated throughout the evening.

All but one of the live-shot reporters was female. In every case, the sound manager had given each reporter the biggest, ugliest, black-colored ear-muffed headset and microphone I have ever seen. So, while the resulting sound provided a good balance between reporter’s voice and crowd noise, the news reports looked absolutely Halloweenish.

Three of the reporters each had an abundance of blond hair. The black headsets smashing against blond coiffures made them look like clowns. Certainly they will never be able to use clips from that event in their demo reels. 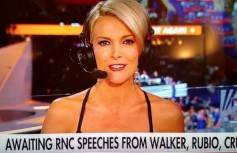 Fox News Republican Convention coverage used headphones for hosts and guests. From a visual perspective, it did not work. Female hosts often adjusted the headsets to the detriment of their hair. Men, with less hair, had no such problem. Even so, no one looked comfortable wearing the headsets. Image: Greenwich Time.

Back to my original point, today’s football game audio. I watched the game on a local station. The audio was adequate, but not great stereo. Between the announcer and color person fighting each other to get their lines in, the sell-out crowd was barely heard.

The Chiefs’ stadium seats almost 80,000 fans and it was mostly filled. Not capacity, but give them a break as the temperature was 4 degrees at game time. Anyway, I seldom heard the roar of the crowd on the TV broadcast.

I checked the local radio station broadcast and it was superior. It had balanced audio levels, a good mix between play calling and color commentary. And, the crowd noise came up and down as appropriate with the field action.

I asked myself, why can’t the TV broadcast provide matching audio quality?

Because for television, it’s all about the image. The game broadcast uses million-dollar graphics bouncing across the screen accompanied with highly compressed, punchy audio tracks. Even so, I have never head a viewer say, “Wow, I love those graphics.”

But I have friends complain about not being able to hear the announcer because of crowd noise. On the other hand I’ve watched games where the crowd noise was so low, the broadcast game play became as dry as desert sand.

Finally, after another tirade to my wife about what I believed was bad audio, she smiled and replied, “Just watch the game dear.”

Next time, I may watch the video, but I will listen on the radio.