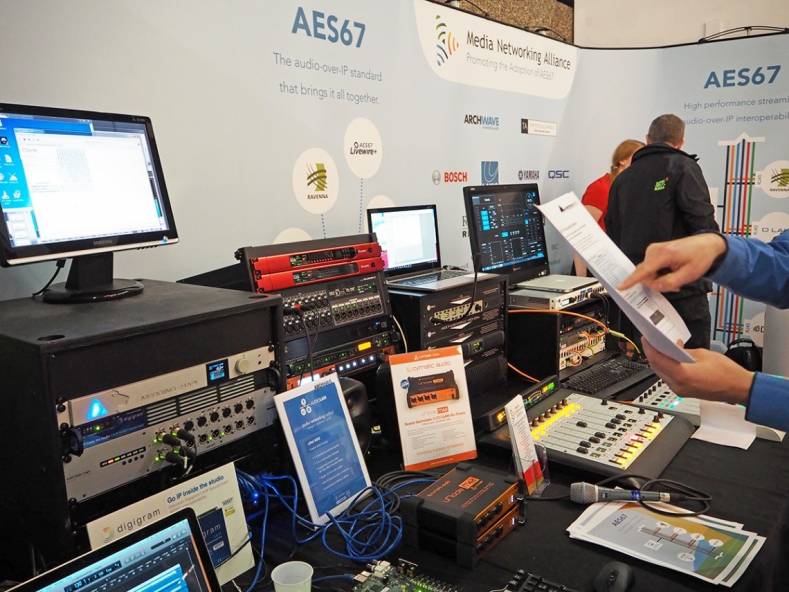 Demonstrations of the AES67 networking format have shown how the open standard helps manufacturers, integrators and end users alike.

Most agree that networking audio products to create flexible workflow infrastructures is the best way to distribute and leverage the multiple signals required in a video production or broadcast facility. However there remains some debate about the most efficient way to do it.

Traditional AES3 and MADI systems used synchronizing word clocks to keep codecs bit and frame aligned to produce distortion and error free audio. AoIP introduces new challenges as we move from a well-defined uncontested point to point infrastructure of audio cable, to a network of routers with each audio packet fighting for space on the CAT5 cables. Without synchronization audio would be distorted and be full of pops and squeaks.

On the face of it AES67 and Dante from Audinate seem very similar as they both provide word and frame clock alignment to guarantee the delivery of high quality audio over IT networks. However, Dante goes one step further as it abstracts away the IT network to deliver a user management system enabling simple discovery of connected equipment and interfacing to computers. In effect providing a system that is easy to manage without having to have an in-depth understanding of the underlying IT infrastructure.

"On a practical level, IP audio is so much easier to deal with and far more scalable for doing the fast-paced productions that go on in broadcasting these days,” said Brad Harrison, Director of Sales for Asia, Africa and Middle East for audio console maker Wheatstone. “Mic sharing, studio swapping, and setting up IFBs are straightforward and quick, which means a good return on investment because you’re able to streamline production and reduce hardware costs in many cases.”

Harrison said broadcasters feel a sense of urgency to begin the migration to IP, for both audio and video, in order to reach consumers through whatever means are available today, whether over the air or through smart devices.

“IP audio is a mature technology that’s been tested and proven and has a comparatively established set of standards that make it straightforward to adopt,” he said.

Wheatstone has developed its own networking scheme, called WheatNet-IP, which it says is fully compatible with the AES67 standard. In fact, Wheatstone was one of the manufacturers that helped develop, test and support AES67, and more recently AES70, which is the new IP audio control standard ratified earlier this year.

“We take the approach that it’s critical for the audio network to be able to access audio anywhere in order to fit into real-world broadcasting,” said Harrison. “That’s why WheatNet-IP gets along with everyone, including MADI gear like ProTools and TDM systems. In addition all of our I/O access units are AES67 compatible, which means you can integrate the WheatNet-IP audio network with other AES67 compatible devices and systems.”

WheatNet-IP handles native analog, microphone, AES/EBU, SPDIF, AoIP (audio over IP), MADI, SDI and AES67 signals. Users can ingest any audio format into the WheatNet-IP, and convert to any audio output–including analog to digital, AES to IP, and microphone to AoIP.

Tom Knowles, Product Manager of Broadcast Systems at Solid State Logic, another console vendor, said that his company set a strategy of using existing networking standards and technologies rather than inventing its own. Standard network connections and protocols are used to provide control within SSL systems, and to provide connections to other manufacturers’ equipment.

For Audio Routing, the company’s new System T broadcast audio production environment is based around Audinate’s Dante AoIP technology, and also incorporates the AES67 standard. Each System T ecosystem is based around three elements; a new networked implementation of the SSL Tempest processing engine, a variety of networked control interface options for multi-operator control, and Dante network based audio routing and I/O.

“The most compelling reasons to select Dante were its sophisticated and complete API, and wide uptake across a large range of manufacturers and market segments,” said Knowles, “allowing not only audio interoperability but guaranteed software interoperability with any Dante implementation. Dante is being embraced not only by audio hardware manufacturers, but by important software system integration providers and control system manufacturers.”

Indeed, Dante has been embraced by 300 manufacturers, covering over 800 products. Brad Price, Senior Product Manager at Audinate, said that initially, the adoption of the Dante’ networking protocol was driven by the fact that AV manufacturers recognized that Audinate, as a networking company, provided them with a solution that was guaranteed to be interoperable, and that the technology was commercially supported.

Audinate produces Dante modules, chipsets and reference designs to fit virtually any type of audio product, from tiny, cost-effective single channel devices to massive consoles with hundreds of channels. And they all work the same way, with the same tools. Dante offers by far the widest uptake and the most defined advanced feature-set of the current technology options. It represents a reliable, high capacity, ultra-low latency audio network with plug-and-play discoverability, full redundancy, advanced API, and excellent value for the customer, according to the company.

Price said that OEMs ultimately concluded that it was better for them to invest R&D in their core competencies, rather than expending continual R&D investment to spin their own networking implementation that may not be as complete as Dante—and, according to Audinate, not as interoperable.

“The widespread acceptance was thus driven not only by the technology itself, but by the ‘network effect’ in general,” he said. “End users can buy virtually every category of product today with Dante, giving them a vast number of choices from which build their own solution.”

Dante, now in version 3.0 firmware, differs from other network protocols in technical completeness, according to Price. It consists of a suite of technologies: an easy to integrate audio over IP networking implementation, along with well-defined developer tools and software applications. This provides manufacturers with a complete toolkit from which to build networked products, plus it gives end-users everything they need to easily design, use and manage systems with audio networking. This is very different from only having a published standard, which still requires additional building blocks, which may result in very inconsistent implementations.

“Our approach ensures complete consistency in all Dante-enabled products, no matter what the brand, which means that systems can be designed knowing that audio connectivity is already a solved problem,” said Price. “End users can create easy, reliable workflows knowing that Dante will “just work”, every time. 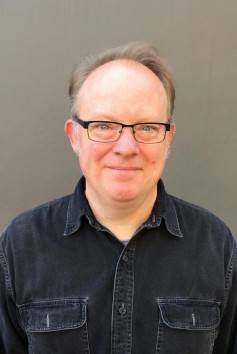 Dante facilitates network convergence due to the fact that it is designed to work with standard network switches, allowing it to be easily integrated with existing IP infrastructure in a facility without the need for bespoke or “special” network hardware. Solutions that require special switches create isolated islands of functionality that needlessly limit the scope of audio distribution on a network, adding costs and complexity where none is truly required. Dante has no such limitation, and works with hundreds of readily available network switches.

Interestingly, Dante also incorporates support for AES67, allowing users to connect to other audio networks without disturbing the routing or performance of the Dante network in any way. Finally, Dante Controller software provides users with audio-specific network management tools that allow them to monitor clock health and latency in real time.

Many new products are now being introduced that natively support AES67. It is an AoIP interoperability standard, developed by the Audio Engineering Society and published in September 2013. The standard is intended to provide the audio transport and clocking requirements for different AoIP technologies to interchange audio. It does not strictly define how to control and manage these connections. The details of the configuring of these connections are then determined by each underlying technology, manufactures implementation or a control system deployed that manages multiple technologies.

The AES67 standard is what’s called a “layer 3” protocol software suite based on existing standards that is designed to allow interoperability between various IP-based audio networking topologies like Ravenna, Livewire, Q-LAN, and, yes, Dante. It also identifies commonalities with Audio Video Bridge (AVB) (AVB) and specifies real world AVB interoperability scenarios. AES67 is designed to ensure interoperability between previously competing audio-over-IP systemsand long-term network interoperation between systems.Since its publication, AES67 has been implemented independently by several manufacturers and adopted by many others.

The Choice Is Yours

So, does the audio industry have to standardize on one format? Not necessarily, according to those with experience in audio networking.

Today’s standard industrial IT infrastructure has already overtaken the technology of AES/EBU, MADI and TDM routers in terms of performance, cost and flexibility,” said Knowles. “Networked systems deliver huge improvements in infrastructure flexibility, better scalability, and significantly lower costs. Broadcasters and Systems Integrators can expect more choice in selecting interoperable equipment and solutions from a range of suppliers and will have more scope to manage and control these systems.”

He added that improved flexibility, interoperability, and features like discoverability will mean the broadcasters can adapt their systems as their own needs evolve and demands change. Freedom from expensive central routing hardware means that budgetary and inflexible infrastructure obstructions to improvements, change, and renewal are removed.With System T, networked control allows multiple operators to share core processing power, opening up many possibilities for collaborative and multi-role production. 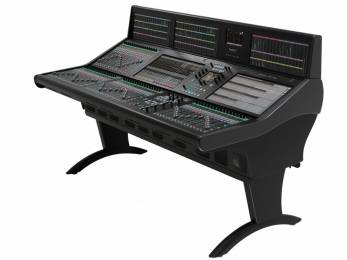 Solid State Logic has introduced a fully networked broadcast audio mixing console called the System T that’s been designed from the ground up to provide the power to handle large-scale productions in a multi-platform delivery driven future. 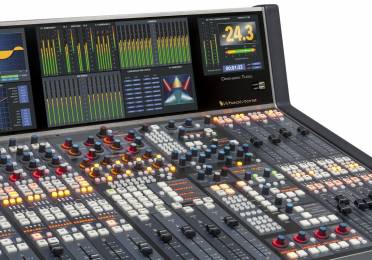 Wheatstone has added new touchscreen options for its IP-enabled Dimension Three TV audio console that enables operators to use familiar smartphone gestures such as “pinching” to easily make edits during fast-paced projects.