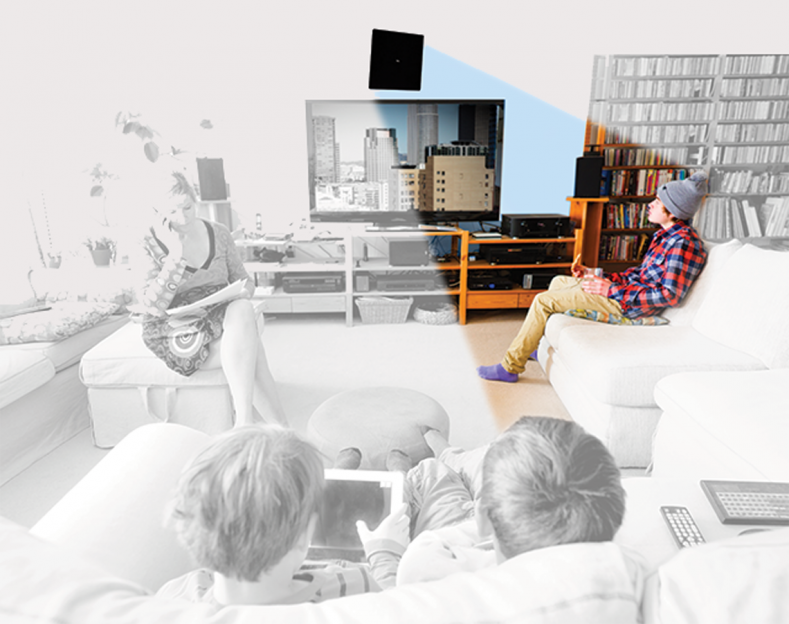 A focused sound source enables a family to enjoy a common space without the television audio intruding into the personal space of others.

Holosonics has created a directional sound system that can support individualized listening in a variety of spaces--all without headphones.

At this year’s CES show, one exhibitor, Holosonics, claimed viewers can get twice the sound from a single TV set. The company calls its technology “Audio Spotlight PrivateSound”. The technology creates a tight, narrow beam of sound that can be controlled with the same precision as light. Aim the speaker at a desired listening area to keep sound focused speciﬁcally to your listeners and yet it will be quiet everywhere else.

The more technology develops, the more personalized our lives become, and the less personal our interactions. It used to be that the living room was a place where families would congregate around the television and spend time watching local broadcasts together.

Now there are literally hundreds of channels and viewing options from which to choose. With so much selection, it's much easier to pick what you want, but your preference may not be what your partner, or your child, or parent wants. Maybe they don't even want to watch, or hear, anything at all. That’s where “PrivateSound” comes in.

Audible sound has wavelengths ranging from a few inches to several feet. Because these wavelengths are comparable to the size of most loudspeakers, sound generally propagates omni-directionally. However, by creating a sound source much larger than the wavelengths a narrow sound beam can be created.

Holosonics relies on high-frequency wavelengths, only a few millimeters long to develop the focused sound. Because these wavelengths are much smaller than the source they naturally travel in an extremely narrow beam. But as the ultrasonic beam travels through the air, the inherent properties of the air cause the ultrasound to change shape in a predictable way. This gives rise to frequency components in the audible band, which can be accurately predicted and precisely controlled.

With this technique the sound source is not the actual speaker cone, but an invisible beam of ultrasound, which can be many meters long. The new sound source, while invisible, is very large compared to the audio wavelengths it's generating. So the resulting audio is now extremely directional, just like a beam of light. 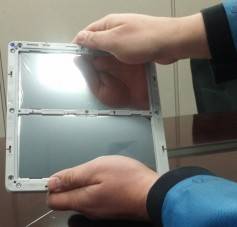 Traditional paper speaker cones will not produce the needed high frequencies. This required the development of a moving film solution.

This required Holosonics to develop its own custom, proprietary transducer technology. The solution is based on a thin moving film, rather than piezoelectric ceramics. The resulting transducer is light, inexpensive, extremely efficient, and provides the required ultrasonic bandwidth and fidelity. 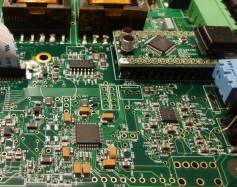 As any audio geek knows, amplifiers are not designed to produce sonic frequencies. In fact, many amps could self-destruct if sufficient high frequencies are present, perhaps even forcing the amp into self-oscillation. This is one reason audio amps are bandwidth limited to about twice the upper frequency of human hearing.

Also, the impedance of the Holosonics transducer is vastly different than that of a traditional 2-ohm to 8-ohm loudspeaker. This further limited the use of traditional amplifier technology.

The Holosonics amplifier relies on high-efficiency ultrasound amplifier specifically designed to accurately create high-power ultrasonic signals and drive a matched impedance transducer. The company claims their amplifier is so efficient that no heatsinks are required.

Consumer applications include spaces where users, viewers and families must share common spaces. Often the television is the audio offending element. Here, the Holosonics solution helps reduce the audio interference to others by providing a physically focused sound field, eliminating noise to others.

So where would this be applicable? The company’s website illustrates multiple types of applications; audio for digital signage, trade shows, exhibits, libraries and consumers. The consumer application supports a common theme in today’s home-multiple people doing engaged in divergent media applications.

Mom is working on an iPad, Dad is watching a game and junior is doing his homework on a laptop. A focused sound source enables all members of the family to enjoy the same space, while not being overwhelmed by the sound of the television.

So much for the 7.1 channel surround audio broadcasters are so eager to provide.