Does your facility still need to play vinyl records? If so, there remain multiple solutions and both Sony and Techniques introduced new models at CES 2016.

Do you have some old 331/3 RPM records you’d like to still be able to play, but you dumped your turntable years ago replacing with a CD player? The scenario resembles the movie title, “Back to the Future”, old is new again for audio.

At the 2016 CES event, two giants in audio, Panasonic and Sony introduced new turntables to support the resurgence of vinyl.Collectors, connoisseurs and audiophiles alike support the belief of the superiority of vinyl reproduction. These folks kept their records and would like to have access to those audio sources. Unfortunately, new turntable technology has been lacking for several years.

Panasonic and Sony both have met this need by offering new solutions at the CES event. 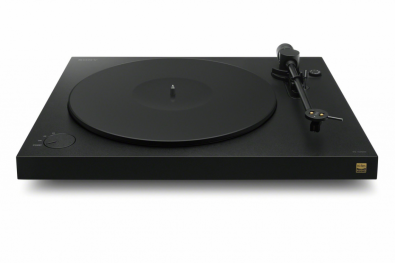 Sony PS-HX500 has both a DSD digital output and standard audio via RCA jacks.

Sony released the PS-HX500 hi-fi turntable designed to not only spin the disk, but provide high-quality conversion of analog signals into either 24-bit WAV signals or their exclusive format – DSD. The turntable provides both a digital USB and analog L+R outputs on the back panel.

“The great thing about this is that it’s not just the ability to archive your vinyl records, You can to experience the music while you are doing so, you can set your in-points and out-points, the software will take care of the rest. We have a couple of formats, you can record in the highest [quality], which is DAC, and you are really going to be able to hear the difference between a standard digital download and what comes off the turntable….It’s not just about archiving the media, it’s also about playing the media whenever you like.”

The HX500 will be available in the spring. No pricing was provided.

Panasonic also addressed the resurgence of vinyl audio with the announcement of the Technics SL-1200G turntable. This direct-drive turntable is based on the famously popular Technics SL-1200, a model that’s been common with DJs for years. While that model was discontinued in 2010 it is still available on eBay for about $300.

BTW, for those of you really into this model of turntable, you can get a custom set of two Technics 1200 M3D Direct Drive Turntables on eBay for a list price of $2000! But remember these turntables are “customized”.

The new model relies on a twin-rotor surface-facing direct-drive motor. It is specifically designed to remove a weakness of direct-drive turntables’—"cogging"—by removing the iron core from within the motor. 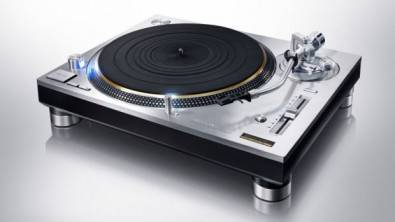 The Technics 50th anniversary limited edition Grand Class SL-1200GAE turntable. The Technics brand has been a standard production and radio-on-air solution for many years.

Promising broadcast quality, the turntable's three-layered platter is comprised of heavyweight brass and die-cast aluminum with rubber along the entire bottom side to smooth out unwanted resonance. Technics claims the new model’s resonance reduction is better than what was provided in the famed SP-10MK2.

The turntable base is composed of four layers starting with a 10-mm-thick top aluminium panel which has been added to the previous three-layered construction of a die cast aluminium, BMC, and heavyweight-class rubber plate like that of the SL-1200MK5.

The tonearm is constructed from lightweight magnesium, which provides a high damping effect. The tonearm is made using a cold drawing manufacturing process and achieves the required high-precision. The traditional Technics tonearm gimbal suspension construction incorporates horizontal rotation axis and the vertical rotation axis intersecting at a single central point.High-precision bearings are mounted in a cut-processed housing.

The standard Grand Class SL-1200G is slated for availability in late 2016. No price was announced.

Because the prices for these two new turntables were not given, I thought you might want some alternatives--especially if you really need to buy one before spring. 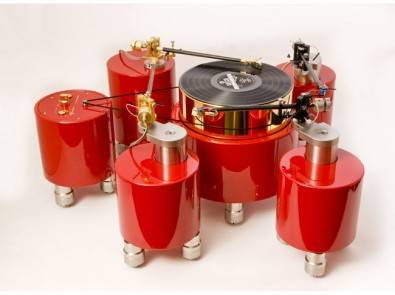 DaVinci Audio Labs AAS Gabriel Master Reference turntable comes in a choice of luxury finishes including black, Ferrari Red and Lamborghini Orange. There's even a white version with a 24ct gold platter and knobs. The regular models begin at a mere $50,000.

According to one Techradar survey article, turntable prices range from $350 for a Pro-ject Debut MkIII basic turntable to $250,000 for a Goldmund Reference II turntable. However, that quarter-of-a-million dollars does include a team of Goldmund engineers who will deliver, install and setup the turntable for you. Unfortunately, the price doesn't include a cartridge or even a tonearm. The company only makes five per year, so order now.