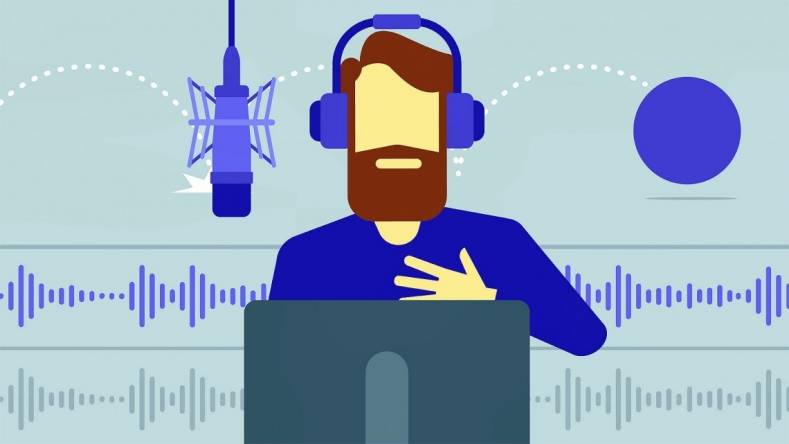 Recording a voice is often but the first step. Post-production processing and equalization can add much to the final product's quality.

All audio recordings of human voices occasionally need tweaking. Whether you’re a reporter doing a voice-overs, a podcaster or a broadcast narrator, everyone is recording more on-location these days. From reducing minor background noise to compensating for poor room acoustics, minor adjustments in equalization (EQ) can enhance the human voice.

Start by recognizing that every audible sound sits within the frequency range of human hearing. With equalization, one can adjust the character and tone of a sound by boosting or cutting these different frequencies.

It’s important to remember that sound can’t be completely changed with equalization. One can’t create new frequencies. We can only remove or exaggerate what’s already there. EQ allows one to accentuate or attenuate specific parts of a sound.

A broadcast equalizer limiter is an application that often relies on software and a user GUI to enable on-screen frequency sliders to make changes in the overall quality of music or voice recordings you are trying to broadcast. Click to enlarge.

EQ can improve the clarity of the human voice or reduce some unwanted characteristics picked up in the original recording. EQ can be very complex, but non-technicians don’t have to understand the entire subject to use it to their benefit. Just a few minor EQ tweaks can make major improvements in voice quality.

The basic EQ plug-in that comes with most digital audio workstations is all that’s needed. These plug-ins can correct most common problems, including traffic noise, wind, background machinery or handling noise with a microphone. All of these problems occur in the low-frequencies, which can often be eliminated by reducing specific frequencies in the lower part of the audio spectrum.

Low-cut filters attenuate frequencies below the cut-off and high-pass filters allow frequencies above the cut-off to pass without attenuation. As an example, rumble filters used on record players use a low-cut filter and have an adjustable cut of frequency between 10Hz and 200Hz. Although its referred to as low-cut, it is still technically high-pass, but we call it low-cut due to the low frequency of the cut-off point. If the low-cut frequency is too low then it will not reduce the rumble, but if it’s too high then it could affect the lower end of the audio mix. 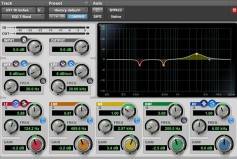 A parametric equalizer lets the user control three aspects of the audio: level (boosting or cutting), the center frequency, and bandwidth (also known as Q or quotient of change) of each frequency. Such precision gives users more control over sound modification. Click to enlarge.

Parametric EQ can make very specific adjustments in the audio. It is best used for targeting a particular frequency to eliminate. It might be like an “S” with too much whistling sound or excess room resonance. Parametric EQ allows one to boost or cut any frequency using bell curves, filters and shelves.

With EQ, there are no absolute rules. But it is best to start by making cuts rather than boosts. EQ can throw you. Boosting one frequency range can cut other frequencies, and vice-versa.

For example, cutting the low-end can make the high-end sound brighter. So, listen carefully as adjustments are made. Adding or cutting one frequency can impact the audio in ways we don’t expect. In most cases, gentle cuts or boosts, of only a few dB, will sound best. Leave serious acoustic problems for the experts.

Wide curves (low Q) and small boosts or cuts will sound most natural. After EQ adjustments have been made, be sure to play the audio and turn the EQ on and off while the audio is playing. It’s important to make sure the EQ is actually improving the sound. 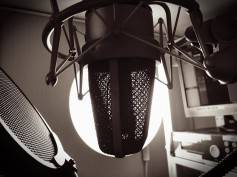 Even studio audio recordings can benefit from post-production audio processing.

Finding the right EQ settings requires experimenting. However, there are some common places to begin. If a recording sounds dull or boomy, reduce the frequencies around 100-200 Hz with a low shelf or a wide parametric EQ. If the the recording is shrill, try reducing the setting around 1000 Hz with a parametric EQ.

If a speaker’s “S” sounds stand out, it can be lessened with a narrow-shaped curve using a parametric EQ. The targeted frequency to cut varies widely among different brands and types of speakers, ranging from around 3 kHz up to 7 kHz, depending on how the speaker pronounces the “S” sound.

After very minor EQ adjustments are complete, the voice-over narrator need to make sure there is no clipping in the segment. If it’s a problem, a little limiting might be needed. Limiting also adds some extra perceived volume, which can enhance the voice. 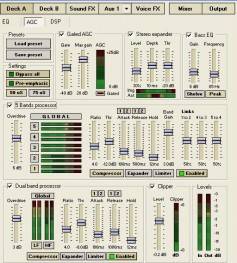 Software-based audio processing often comes in the form of plug-ins. When combined they offer a tremendous range of options for audio control and adjustment. Click to enlarge.

For those with thin voices, one way to sound richer and more authoritative is to use a ribbon microphone and make use of its proximity effect by speaking closer. This can ensure that “voice of God effect” used by on-air talent since the 1930s. It can boost the on-air effect of any voice by adding gravitas.

Of course, there is no exact science to improving on-air voices. Everyone has to experiment to find what’s right for them. But minor EQ and mic adjustments can enhance virtually voice. It just requires minor tweaking to find the sweet spot.