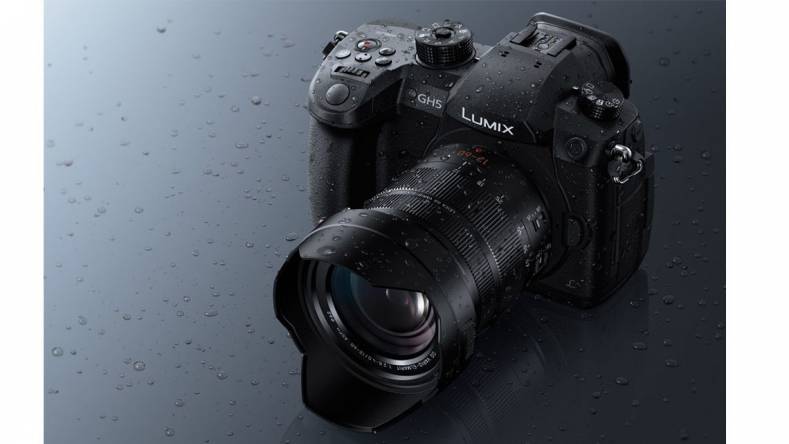 At CES2017 Panasonic announced that the long-awaited GH5 is set to ship in March 2017. First announced at Photokina October 2016, the company has now released the full specification of this replacement for the GH4 micro four-thirds format mirrorless hybrid camera. The GH4 has been very popular with indie shooters, and this new camera promises even more features at a hot price, making it eminently featured for indies wanting to get into 4K .

The GH5 is the latest in Panasonic's GH line-up of hybrid Micro Four Thirds format cameras. Comparing the camera with the GH4, the headline updates are a new sensor and processor. Together these support shooting video with 4K resolution at 30P with internal recording to SD cards or 60P, 10-bit with an external recorder. At the $1999 price (US), this camera certainly shows promise for the entry-level videographer looking for value and performance.

A new 4/3in 20Mpxl sensor replaces the previous 16Mpxl sensor used in the GH4. Processing the sensor output is the new Venus engine that computes a nine times larger area of pixel information during the de-mosaic process for precise detail reproduction.

Now that videographers expect to be able shoot black cats on dark nights, ISO is a big factor. A 17 x 13mm sensor is not going to be as fast as a larger sensor, but the secret sauce of noise reduction is what ultimately determines the maximum usable speed of the camera.

The new sensor has a higher readout rate, and along with faster processing in the Venus Engine, they enable 4K 50/60P shooting. The camera can record 4:2:2 / 10-bit video to internal SD cards (restricted to 4:2:0 8-bit at 4K60P/50P). There is a choice of wrappers and codecs: MOV, MP4, AVCHD Progressive and AVCHD. At release, the camera will record at rates up to 150Mb/s long GOP, but a future firmware release will enable recording to 400Mb/s all intra. A single version supports world standard frame rates: 24, 50 and 59.94 Hz. For slo-mo shots the camera can shoot up to 180 fps at 1080P.

Now that looks are so popular, the 10-bit coding and the option of a log output, means there is plenty of range to work with in the grade. The opto-electrical transfer function can be selected to be Cinelike D / Cinelike V, similar to 709 or with a paid upgrade, Panasonic’s V-LogL. Hybrid log gamma will be a future firmware update.

The GH5 has dual image stabilization. It combines a 2-aixs lens stabiliser (with compatible lenses) with a 5-axis body stabilizer, with a claimed 5 stops of correction. 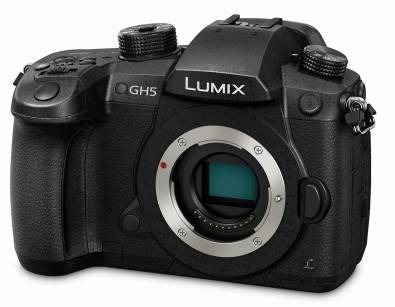 The GH5 has a larger, 3.2-in TFT LCD rear monitor free-angle with 3:2 aspect ratio and a wider viewing angle than the GH4. The viewfinder has an OLED display. The monitor also can display a waveform monitor and vectorscope. The camera also embeds SMPTE-compliant timecode either in Rec Run or Free Run count-up methods.

A big improvement over the GH4 is the XLR adaptor. Whereas the GH4 had the DMW-YAGHE interface with XLR audio inputs and BNC video outputs (which cost more than the camera or an external field recorder), the GH5 has an XLR audio interface, DMW-XLR1, that sells at just under $400. The the DMW-XLR1 plugs to the hot shoe and has 2 XLR inputs with 48V phantom power from the camera battery via the hot shoe, obviating the need for a linking cable. It has level controls and input switching.

Another handy feature for video users is a full size HDMI output, rather than the miniature connector normally found on cameras.

As is usual with modern cameras, it includes wireless connectivity via Bluetooth 4.2 and 5GHz Wi-Fi. Bluetooth can be used to connect to a smartphone for instant image sharing with a simpler setup than Wi-Fi.

The GH5 has many new features that will appeal to the video shooter. It provides a low-cost entry to 4K shooting, and is well-placed to follow in the success of the GH4. 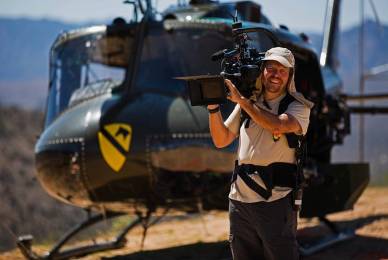 The Outdoor Channel has premiered the second season of “GunnyTime with R.Lee Ermey”, shot in 4K on the Panasonic VariCam 35. The host-driven television series focuses on vintage and exceptional weapons and related technology, and exploits the outsized personality of Erm…