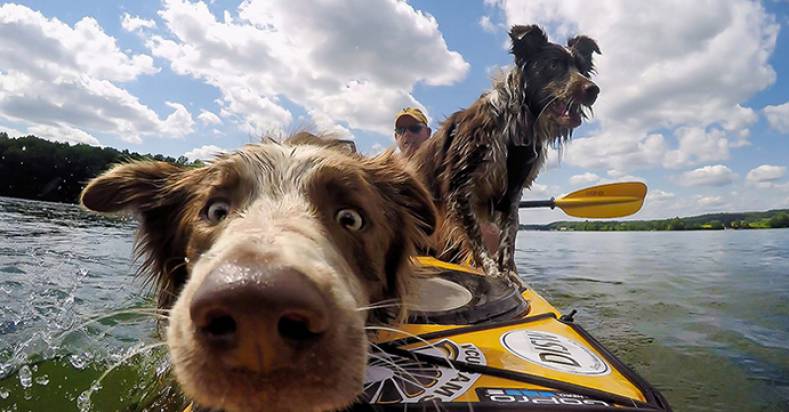 GoPro has a huge fan base, but broadcasters remain a smaller component of that user base. Image: Jeffrey Barth.

When most people think of GoPro cameras, they think of action shots of skiing, bicycling, skateboarding or exotic point-of-view shots. But for more than a year, GoPro has been promoting its cameras as a link in the broadcast chain — allowing live programming to features images ever before possible.

The HEROCast transmitter comes in both a standard version and a BacPac version, both priced at $7,500. The standard version remains detached from the GoPro camera and is tethered via an HDMI cable. This is good for body mounting or semi-permanent installations where the transmitter is mounted to a fixed location in a studio. 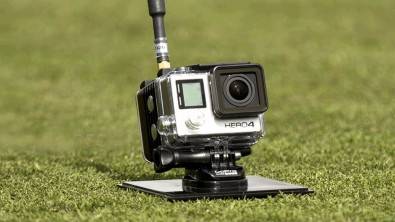 All in one HEROCast system

The BacPac model creates an all-in-one camera system — with the transmitter attaching directly to the back of a HERO4 or HERO3+ camera’s standard housing.

Vislink also sells PROceiver, a compact, single box diversity receiver compatible with the HEROCast and HEROCast BacPac wireless transmitters. It was designed for extreme sports, live events and other applications where size, weight and broadcast quality performance are important.

Being a diversity receiver, the PROceiver employs dual antennas and uses maximum ratio combining (MRC) to enhance demodulated performance and an increased operating range. It features ASI MPEG4/H.264 decoding and supports resolutions up to 1080i and 720p at 50/59.94 fps.

A range of video outputs are provided, including HD-SDI, composite and component video and a HD-to-SD down-converted composite output for monitoring. There are also digital and analog audio outputs, a Genlock input and an Ethernet port for control. The receiver price is $12,500. 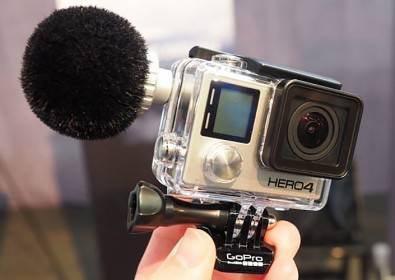 Though HEROCast is GoPro’s main broadcast product, other vendors are developing products that enhance GoPro cameras for professional use. For example, Sennheiser is developing a professional waterproof microphone that’s capable of cutting wind noise up to 40 miles per hour. Still under development, it is expected to be available later this year.

Go Puck, a mobile battery company based in Sarasota, Florida, is introducing pro mounts that allow the attachment of its batteries to the tiny camera. Blake Fuller, GoPuck’s CEO, said his company is working in the GoPro Developer Program to enhance the camera’s usability and potential by providing power seven times normal or powering up to four cameras at a time. 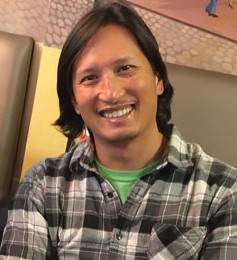 Carlos Casas, business development manager for advanced products at GoPro, said the HEROCast project began a few years ago with ESPN’s X Games when the company wanted to get its GoPro cameras into the hands of broadcasters. “We worked together with Vislink, one of the leaders in RF broadcast, to design the HEROCast transmitter,” he said. “Though it’s our branded product, Vislink manufactures and resells it.”

He said HEROCast has been successful as a professional RF broadcast system and is growing in sales. “We feel every broadcaster, producer and production company should have one in their toolbox,” he said. “It is ready to go out of the box.”

Though Casas would not reveal any future GoPro plans for the broadcast line, he said the company’s developer program has a diverse group of companies supporting the camera. One developer is Timecode Systems, whose new SyncBac Pro system is now available.

The system also integrates the B:LINK Hub and uses long-range B:LINK RF to power on a real-time dashboard displaying all Timecode Systems units and compatible cameras and audio devices on the set — centrally on a single screen.

Users have advanced capability to remotely control not only Timecode Systems devices, but also any compatible cameras and audio devices to which they are connected.

The HEROCast transmitter is not necessary for television broadcasters to use GoPro cameras in non-live situations. In a news show, for example, the footage from a basic GoPro camera can be integrated and edited into other video footage.

The GoPro’s video output is in a mp4 file format stored on the camera’s internal MicroSD card. Broadcasters wanting to use that footage can — depending on their post system — either convert and/or import the file into their professional editing system.

So far, the GoPro has been used for some interesting applications, mostly in sports. When the University of Mississippi opened a new $96 million basketball venue —The Pavilion at Ole Miss — it used HEROCast to entertain fans on the NCAA basketball arena’s large center-hung video board. 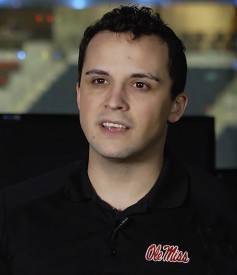 Seth Tanner, director/producer of in-venue productions at the school, said to provide engaging content for fans during breaks in play, Ole Miss uses two shoulder-mounted cameras with GoPro cameras on selfie sticks. The sticks are passed around through the crowd and live video from the cameras is received via Vislink receivers and then broadcast to the video board in The Pavilion. 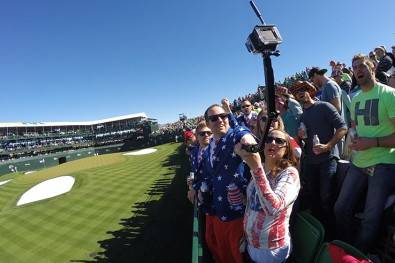 The PGA Tour has used HEROCast-equipped GoPro cameras to capture unique views of the golf tournaments. Dramatic “hole-view” camera shots and player-worn “hat cams” have been used, along with “crowd cams” that put live content creation into the hands of the fans.

The NHL has used the technology in several hockey broadcasts and announced a North American partnership with GoPro. The league announced that it working with Timecode Systems and Vislink to provide the wireless video transport in HEROCast for reliable long-range wireless sync, status and control on live events.

In addition to using the HEROCast systems shots to home viewers, it also provides camera feeds to the NHL's "situation room" in Toronto, where operators monitor up to 16 simultaneous feeds of NHL games.

Whenever a goal is scored or a contentious scoring play occurs, the NHL situation room uses its in-house instant replay camera/server system to provide a quick analysis.

That analysis is immediately available to each game's referees and goal judge via dedicated communication lines. Accurate “stadium” timecode and sync get embedded with the video feeds wirelessly at the source, which ensures that all wired and wireless cameras in each stadium are synchronized with each other.

Rich Feinberg, vice president of ESPN Production, called the use of GoPro at the X Games “a real success” and said his network will build on what it learned during the broadcast. Expect ESPN to use GoPro cameras a future events.

Those tiny, inexpensive GoPro cameras (they are priced between $400 and $500 in basic form) are beginning to permeate the broadcast space as well as action footage market. They can be mounted anywhere and it seems their potential is only beginning to be discovered.

To GoPro where nobody has GoPro’ed before

In the same way that Red Bull has successfully shifted attention to its brand as a lifestyle and not about shifting cans of drink, so GoPro’s business model has achieved lift-off as a media phenomenon. Perhaps it had to,…

​GoPro is teasing more footage of its new drone and video camera product which is due for release at NAB.