Every now and then I come across a YouTube video showing how the latest smartphone camera stands up against a real cinema camera. While these comparisons do show what can be achieved with the latest phones, few would suggest the Red and Alexa should move over to make way for the iPhone, Samsung Galaxy or Huawei Mate. So, these videos should be treated more as entertainment than a serious proposition.

To get around some of the issues the phone manufacturers use clever tricks, like combining the output of several pixels, binning, to lower noise. 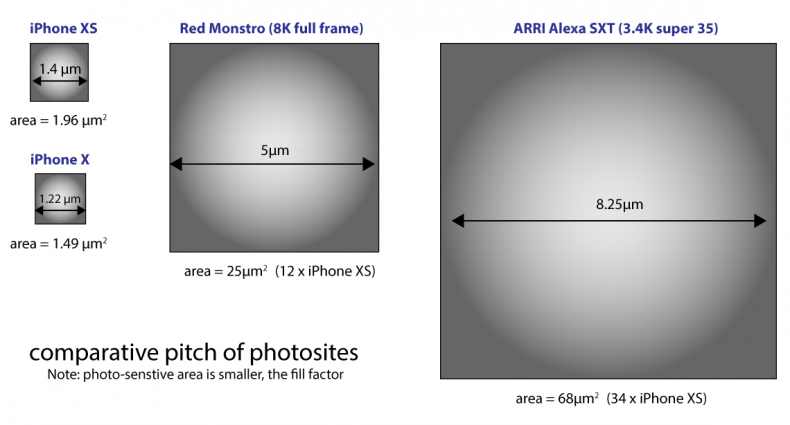 The size of the photo sites on digital cinema cameras is larger by a factor of magnitude than on a smartphone. The diagram shows relative sizes, but note the actual photosensitive area is smaller due to connections, inter-pixel screening, transistors, although the use of microlenses above each photo site mitigates some of the loss in area.

The images from a cinema camera are delivered to post-production, specifically grading. The raw data from the sensor is processed in the de-Bayering process to create the RGB video files, and part of this processing includes noise reduction and sharpening.

An impression of the image captured on the retina — not that great, but our brains make up the difference.

The remarkable level of computing power now available in smartphones means that processes like sharpening and noise reduction can similarly be applied right in the phone. However, the phones are going one step beyond and applying artificial intelligence (AI) to the processing, such that masks can be created around faces, and backgrounds blurred to simulate shallow depth of field amongst other effects. This goes part way to imitating the depth of focus of a large format cinema lens.

Motion picture capture, in contrast, uses human intelligence. The camera operator/focus puller set focus distance and appropriate aperture for the required depth of focus. In post-production, the colorist grades the image for the required “look”. These people are meeting the artistic intent of the director through skilled processes. With a phone, the artistic intent is limited to Snapchat filters or similar.

The smartphone can be likened more to an ENG camera, where the finished image is baked in the camera ready for use in the newsroom, or social media in the case of the phone.

It may seem to be cheating to use AI to pep up an image from a phone, but consider the human visual system. Compared with a camera, the raw image from the retina is pretty poor. It is full-color and detailed in the center (photopic vision), but at the periphery the image become less detailed an monochromatic (scotopic). However, the visual cortex does some pretty impress processing, combined wi the scanning motion of the eyes, and motion of head, to create a 360 degree, 3D representation of the space around us, and all in detailed color. How's that as a counter to AI?

Would You Shoot With a Phone?

Does the smartphone have application in documentary or scripted productions? The YouTube comparison videos focus on video performance, and gloss over aspects like workflow or audio capture. With memory card slots becoming a thing of the past with ever thinner phones, the only way to get the video out is via Bluetooth, Wi-Fi or cellular connections, and with those the attendant heavy compression. Time code to post sync an audio recorder? What’s that?

Then there is personal image, would a camera operator seriously turn up for a shoot with a phone? What would the producer say, let alone the rest of the crew!

For what they are, smartphones capture remarkable images, From the broadcasters’ perspective, for applications like breaking news, the best camera is the one you have with you. And if it is a smartphone, then that is the best camera at that time. Not only that, the phone has great connectivity to get the pictures back to the newsroom.

It should be remembered that smartphone video is predominately viewed on a smartphone, whereas digital cinema cameras are capturing images that will be suitable for theatrical distribution and large-screen UHD television displays.

There is also the element of the numbers game. In consumer marketing, the pixel count is everything, although there seems to be the rise of claims around AI in recent months. “It’s got more pixels, so it must be better” is glossing over the real skills of camera work.

At the end of the day, these comparison videos are a bit of fun “I shot this with a camera that’s a fraction of the price and the difference is not that great”.