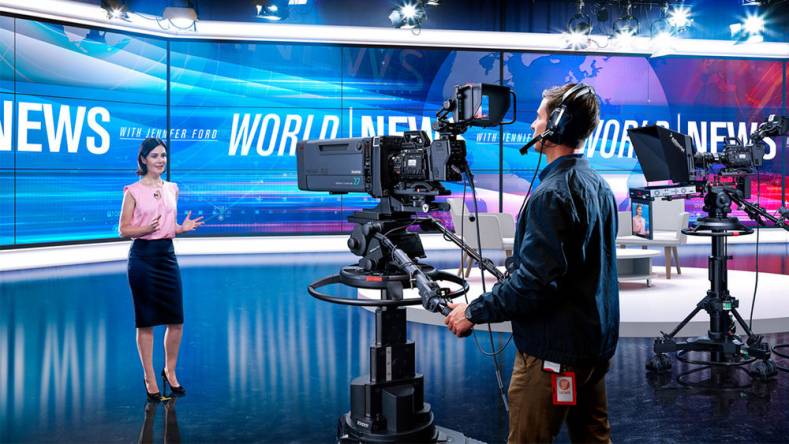 While not yet ubiquitous, 4K cameras—like the Blackmagic Design URSA—are showing up in more production studios every day.

Despite the fact that most broadcasters have been slow to embrace 4K production in their news studios, there are a few that have installed the latest cameras in an effort to produce a master file for archiving. They include non-traditional media organizations like Facebook Live, Netflix and YouTube, which all maintain 4K production studios that are made available to users with significant online followers.

Indeed, with faster Internet connections people have started to watch higher resolutions on larger TVs as well as PC monitors. YouTube now reportedly has millions of 4K videos uploaded every single day and companies like Netflix are requiring their master recordings to be shot in 4K. These high-end cameras are also being deployed by sports venues, as well as eSports and corporate events that need to display images on large screens—applications where the image resolution has to be captivating.

While there is no viable business model for it today, shooting in 4K offers benefits for video editors that can extract two full HD 1080p scenes from a single 4K frame. Also, capturing in 4K and delivering in HD offers a wider color gamut, which translates to better looking images on screen. Archiving 4K content for future use is another value add, but the extra cost is causing many, including TV stations that produce daily newscasts, to look the other way: remaining content with the HD images they have been producing for the past ten years or more.

Manufactures of professional studio cameras fist began introducing 4K UHD (3840 pixels × 2160 lines of resolution) cameras two years ago, have since walked that back to push 1080p cameras with HDR options. With these inherent advantages in mind, companies like Blackmagic Design, Grass Valley, Hitachi Kokusai, Ikegami, Panasonic and Sony all showed 4K studio camera on the 2018 NAB Show floor. Most, however, were cognoscente of the rank-and-file broadcaster’s cold shoulder. 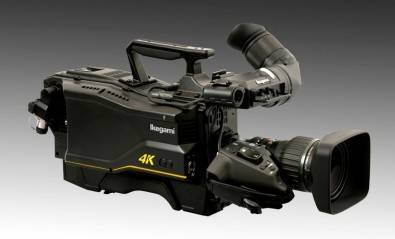 “We recognize that 4K will take time to find a place in everyday broadcasting, but there are other types of customers that are upgrading their studios to 4K production,” said Alan Keil, director of engineering at Ikegami, mentioning names like Netflix, YouTube and Vista Studios, located in Playa Vista, Calif. The latter now maintains a full 4K production services business, complete with Ikegami 4K cameras in its main studios.

“Our company is unique in that we are backed entirely by private equity and are not affiliated with any studio or large media company; like many of the other facilities in [the Los Angeles] area,” said Randall Heer, Co-founder and CEO at Vista Studios. The Facebook Live Live series “Make Up Or Break Up” (the first live multi-camera show in the social network’s history) is shot at Vista Studios with five Ikegami UHK-430 4K native cameras in its main production studio. “We’re here to serve the open marketplace with technology that is flexible enough to handle any type of project. In our minds, the world of high-quality video production is booming and there is a real need in the marketplace for high-quality 4K production, so we’re stepping in to fulfill it.

At the NAB show, Ikegami showed it's the UHK-430 4K UHD camera, which is part of the company’s Unicam XE camera series and is designed to for those that want to use existing B4 mount lenses in the studio and the field. It features three 2/3-inch 4K (3840x2160) CMOS sensors with RGB prism optics and can capture UHD and HD resolutions, starting at 24 million pixels (8 million per sensor). Operators have access to 4K/2K simulcast operation and HD cut out of the 4K picture. It also supports a wide color space and HDR acquisition. 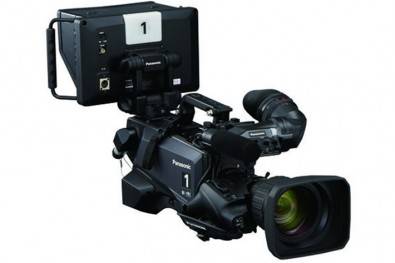 When it ships, the complementary AK-UCU600 camera control unit will also include: selectable 12G-SDI / quad SDI for 4K outputs; accommodation for future SMPTE 2110 MoIP connectivity option board; TICO compression capable output for 4K transport over 3G HD-SDI; and future 2x, 3x or 4x HD output capability for slow motion shooting when the UC4000 is used in HD or 1080p mode.

Blackmagic Design used the NAB Show to spotlight its ⅔-inch size sensor 4K URSA Broadcast camera, which is in use at Now Church, in Florida, for its services and music segments, which are broadcast locally on TV and online. With 12 stops of dynamic range, the company said the camera’s actual sensor size is 13.056mm x 7.344mm, which is smaller than an S35 sensor at 24.89 mm × 18.66 mm. It ships with a B4 mount for ENG-style lenses. EF, F and PL lens mounts are also supported (as an option).

The URSA Broadcast is designed to work with inexpensive standard SD cards, UHS-II cards and CFast cards, and records 1080i (HD) or 2160p (4K UHD) video into standard .mov files—with .mxf to be added in future updates. The camera records using DNx145, DNx220X or ProRes so the files will work with existing broadcast systems and workflows. To configure it as a studio camera, there’s an optional URSA Studio Viewfinder and SMPTE fiber converters. Perhaps the best part is that the URSA Broadcast camera is affordably priced at $3,495 (far lower than competing 4K UHD cameras).

“The point is to make 4K production affordable for everyone,” said Grant Petty, founder of Blackmagic Design. “Given today’s limited installed infrastructure, what matters most is how it looks on screen and I think our cameras hold up to anyone’s.”

The HDC-4300 is also fully compatible with a wide range of existing Sony products and workflows, including viewfinders, large lens adaptors and camera control units.

The HDC-4300’s 4K imagers capture at four times the resolution of HD. In HD shooting, this can be used to achieve extreme high-speed image capture at a maximum of 479.52/400 fps with the optional software upgrade. Capture rates of 59.94/50, 119.88/100 and 179.82/150 fps are available as standard. The full digital process is applied to each frame even at high-frame rates in the BPU-4000, producing the same quality in the images as one at the normal speed. Both the high-speed image and the normal-speed image can be adjusted by individual paint parameters. Captured images can be recorded to the PWS-4500 4K/HD multi-port AV storage unit for super slow motion replay. 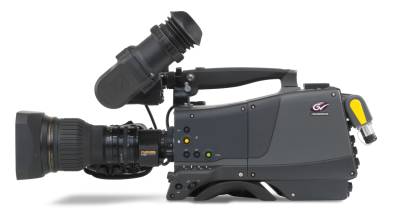 The Grass Valley LDX 86N Universe is a single camera that can switch between multiple resolution and speed formats.

The LDX 86N Series makes two parallel upgrade paths available—one based on higher resolution—HD, 3G, 4K - and one based on higher frame rates—3X and 6X. The LDX 86N Universe, at the top of the range, is a single camera that can switch between all these resolution and speed formats. Any of the lower-level camera models can be upgraded on-the-fly by buying GV-eLicenses online - on a 1-day, 7-day or perpetual basis - to any of the higher models of the range when extra functions are needed. Optional HDR for single-speed operation is available via a weekly or perpetual GV-eLicense as well.

The LDX 86NSeries has the same spatial and temporal upgrade path as the LDX 86 Series, culminating in the LDX 86NUniverse for switchable 1X/3X/6X native HD, 1X/3X native 3G and 1X native 4K.

The LDX 86NWorldCam lets you buy native HD/3G acquisition today, and upgrade to native 4K and high-speed acquisition when you need to, either for 1-day (sold in packs of 10), 7-days or with a perpetual license.

The LDX 86N4K and LDX 86NUniverse are specifically designed for live broadcast 4K UHD in controlled lighting situations and/or wide angle camera positions, especially sports productions, where the use of traditional B4 mount HD/4K lenses instead of PL lenses enhances the producer’s and director’s ability to tell compelling and engaging stories, without any loss of sensitivity—according to Grass Valley. 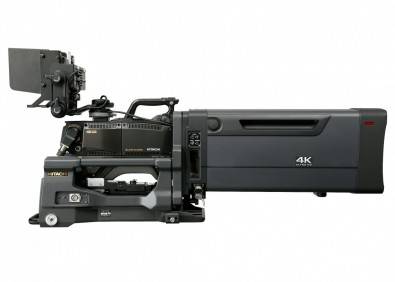 While 4K TV sets have been selling at a brisk pace, due to low cost to consumers, most would agree that there is a significant lack of native 4K content to watch. In light of the competition, this clearly has to change across the traditional broadcast industry soon if it wants to remain successful. While live broadcasts are still airing in HD across all of the major TV networks, all of Netflix’s original content has made the jump to 4K. Amazon is doing the same, making sure its new original content is also produced in 4K quality.

“Competition from these non-traditional broadcasters is fueling the demand for native 4K cameras,” said Emilio Aleman, Engineering manager at Hitachi Kokusai. His company offers the SK-UHD4000 4K Ultra HD camera system, which is used by schools and non-broadcast customers like New World Symphony, a live concert venue in Miami, Fla.

“Cost is what’s holding people back, but 4K is here and will continue to be included in the new and upgraded studios now being built,” said Aleman. “Once TV stations can figure out how to monetize it, 4K will be everywhere because you’ll have to do it to stay competitive. It’s a dog-eat-dog world out there.”

[Editor’s Note: Other 4K-capable cameras at the show included those from ARRI, Canon, JVC, and Red Digital, although these are more targeted for single-camera digital cinematography.] 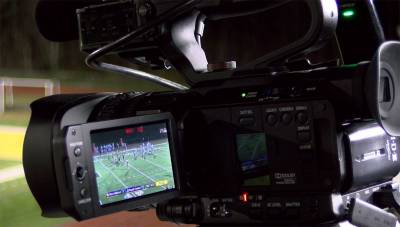 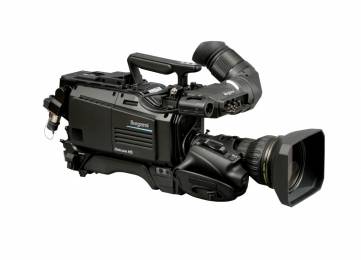 Ikegami will debut the new IHDK-99 3G-Capable 3-CMOS HDTV Portable Camera at 2018 NAB Show. The HDK-99 is the successor to Ikegami’s HDK-95C, and the premiere offering from the company’s Unicam HD line. It employs three 2.6 Megapixel high per… 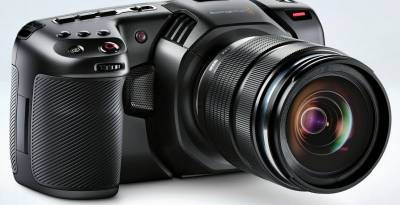 At the conclusion of every NAB, when we’ve decompressed and had time to let all the information sink in, each of us forms impressions of what was our highlight of the show. In my case, it was the new g… 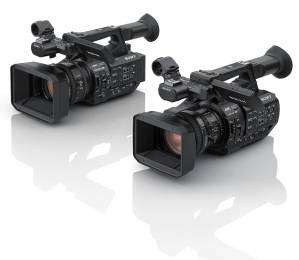 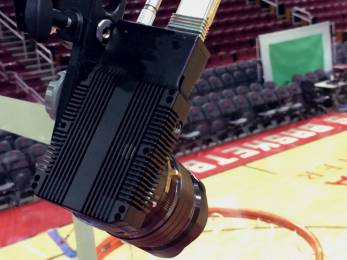 A recent addition to the Camera Corps rental fleet, Clarity is a miniature camera delivering real-time live output and high-frame-rate SDI for use with slow motion replay servers. A UHD version operating at four times real-time is also available.