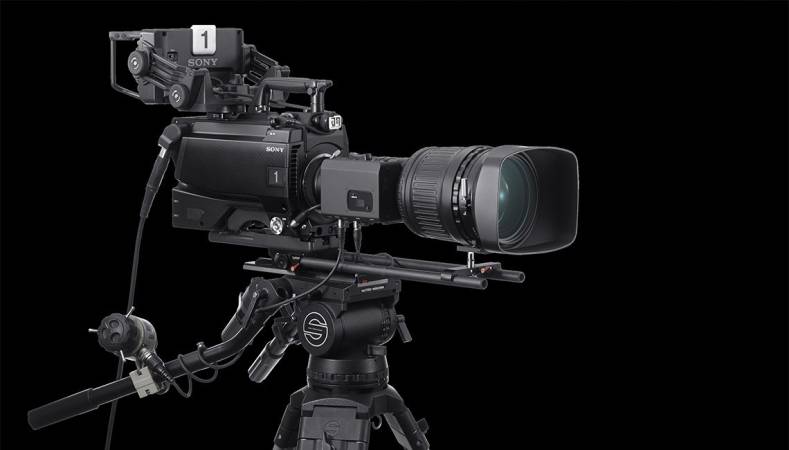 The Sony UHC-8300 8K camera, first shown at IBC207, is it one of several cameras that can support the NHK Super Hi-Vison project.

There is much talk of 8K ranging from film studios to broadcasters looking to shoot world-class sports events. The Winter Olympics was covered at 8K resolution – proving it's no longer a lab experiment. But is there an advantage in ever increasing resolutions, and what is the business case?

Since the beginning of motion pictures and of television, directors and engineers have been on a quest for better pictures in order to convey artistic intent, or greater realism. This quest includes a move to more pixels, higher frame rates, higher dynamic range, and wider color volume. These together can deliver subtler and more realistic scene rendition and reduced motion artifacts. However, there are constraints, some from the laws of physics, and some from the cost of producing, distributing and delivering higher data rates.

Photochemical film had its limits. The losses in negative-positive intermediate copying processes limited the final projection in the theatre to the equivalent of about 1,000 lines resolution. Grain, film weave, dirt and scratches negated the need for higher resolution, although 70mm prints provided a quality increase albeit at a cost that limited its use to premier venues. The advent of digital cinema has overcome the losses and artifacts, allowing for increases in spatial resolution (although notable directors say it doesn’t have the emotional 'look' of film).

Television too awaited digital processing. MPEG compression, with frame storage in the receiver allowed broadcasters to migrate from interlace, with its associated artifacts of limited vertical resolution (to avoid interline twitter) and more motion portrayal (jaggies on horizontal moving edges).

The traditional display, the CRT, was limited in screen diagonal, frame rates and brightness. The flat screen, with the now obsolescent plasma display panels, the ubiquitous LCD, and the increasing popular OLED displays, were a key part of the migration to HD in the home. The higher resolutions, and with the latest LCDs and OLED, higher brightness, dynamic range and color volumes, domestic viewing has been transformed.

For larger displays, although projection reigns supreme in movie theaters, the micro-LED video wall is popular for A/V installations. The video walls can be expanded to any desired size by stacking modules, so are only limited in resolution by the video source.

The Japanese broadcaster NHK has a history of encouraging innovation and pushing imaging technology to long-term goals. HDTV was the culmination of the HiVision project, and the next step, Super HiVision, was eventually realised as UHDTV, as defined in BT.2020 and 2100.

These two projects led the incumbent Japanese camera and lens manufacturers on a continuing development of next-generation product that would support the new specification, initially for HD and 4K UHD (2160P60), and now for 8K UHD (4320P120).

Digital cinematography has followed a very different development route. Early cameras followed the 3-CCD format of television cameras, but the single-chip CMOS camera was to come from a left field source.

When Jim Jannard sold his sunglasses and sports equipment brand Oakley to Luxottica in 2007, he came away with $2 billion, more than enough to fund his start-up, the Red Digital Camera Company. This wasn’t the first company in the digital camera arena, there were Sony with HDW-F900 CineAlta camera (1999), Panavision and the Genesis (2004) and the Thomson (now Grass Valley) with the Viper. Incidentally Nikon launched the first video DSLR in 2008, the D90, soon followed by the Canon EOS 5D.

Red didn’t come from the broadcast background of Sony and Thomson, and with an innovative marketing campaign the company announced a 4K camera, Red One. The technological innovation has continued unabated, with the current high-end product being the Helium 8K S35-size sensor (34mm diagonal), and the medium format Monstro 8K with a 46mm diagonal. Panavision are now partnering with Red with the Millenium DXL2 digital cinema camera, which uses the Monstro 8 sensor and Light Iron color2 science.

So why 8K, when movie theaters are predominately 2K with a fair proportion 4K? This has resonances of 65mm film. There is more data to work with if the capture is over-sampled, then down-rezzed in post to a 4K or 2K deliverable. Not only that, but a wider shot 8K image can be motion-stabilized in post and cropped to 4K for that rock-steady Fincher look without losing definition in the way that stabilizing a 4K image would suffer. If the sensor is larger than super 35, it will gather more light plus it will have the shallow depth of field much loved by DSLR shooters. There are drawbacks to 8K: more data, more storage, larger, and more expensive glass.

The NHK initiative for UHD was focused on improved television experience, with genres like live sports, performance arts and special events. Whereas digital cinema has remained (with the odd exception) wedded to 24fps capture – toted as an essential part of the ‘film look’ – UHD 4K and 8K has matched the increase in spatial resolution with an increase in temporal resolution with the target of 120fps. Although older folks have grown accustomed to vehicle wheels rotating in the reverse direction to reality, the video games generation have grown up with high frame rates. How long the film guys can hold on to their beloved motion artifacts remains to be seen. For high frame rate capture (50fps and above) the issues around data rates and storage are only compounded.

The fruits of the NHK project have been seen across the board from cameras through to over-the-air delivery. Several manufacturers have early versions of 8K cameras available for the NHK field tests. For transmission, HEVC is helping to manage the demands on bandwidth. Displays too have seen developments, with a number of large 8K direct-view products available. 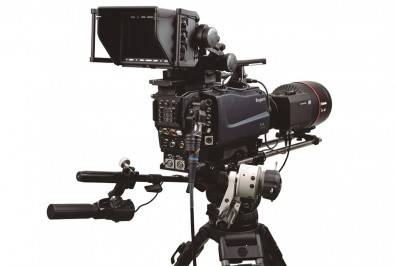 When it comes to delivery to the consumer, the issue of data rates is very much to the fore. Terrestrial and satellite delivery has limits and bandwidth, and for terrestrial it is under constant threat from other potential users like cellular operators. Conventional cable TV also has limits, but move to fiber and there are no limits. It becomes just a question of how much fiber, and how many routers and switches form the network.

Delivery pipes are also constrained by cost. Can the operator make a return on the considerable long-term investment in the delivery infrastructure? Advances in compression algorithms promise a partial solution. The data rate for 8K at 4320P120 is 102 Gb/s, making the 1.5Gb/s of 1080i pale into insignificance by comparison. There are compromises with the early over-the-air services from NHK limited to 4320P60.

What’s it all about?

Do we really need all that compression and bandwidth to deliver 8K to the home? Would the increase in quality be worth the cost, especially when viewed on a screen of 40-inch diagonal or less? Is 8K more suited to large display in stadiums? Does 8K capture and delivered as UHD 2160P or even HD, but with high dynamic range represent a better business proposition?

The developers of 525 and 625-line television thought that the resolution they had chosen was a good compromise between cost and technology, but that was back in the era of vacuum tubes. The nearest thing to compression back then was interlace.

Who knows when 8K will be considered just the norm? My guess is that the advances in high resolution imaging are going to come from the 360-degree VR sector. Considering that one original premise of Super Hi-Vision was to extend the display to cover peripheral vision, the target was for 7680 horizontal pixels to give a viewing angle of 100 degrees. That was sufficient that the pixel structure could not be seen at the recommended viewing distance (0.75 x display height). On that reckoning, 360-degree viewing would need around 28K horizontal resolution! Cracking that in a way that is affordable is where the technology advances are going to originate. 8K video has been done, so in reality it’s just a matter of refining the technology. 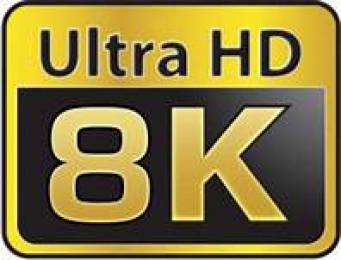 How Far Will 8K Travel Beyond Japan?

As the IOC prepares the largest 8K UHD production yet, from the Winter Olympics in South Korea, it’s worth asking if this ultra-high resolution format will ever be broadcast wider than the shores of Japan. In short, the answer i… 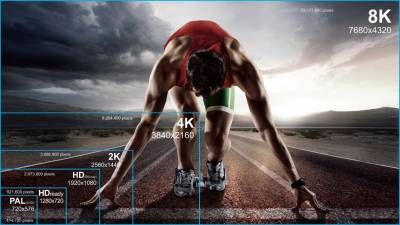 Are You Ready for 8K?

This year at IBC, you will be able to comfortably sit in an 8K living room and enjoy a video broadcast so clear that it will make you lose yourself in a truly immersive experience that practically seems 3-D. This … 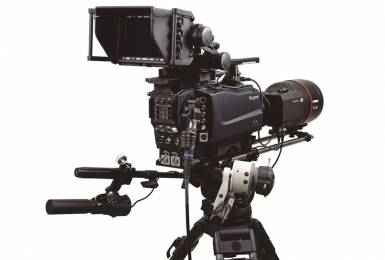 Ikegami will take part in pioneering 8K UHD coverage of the Rio 2016 Olympic Games with a specially equipped 8K mobile production unit, which will be covering the ceremonies, events and more. 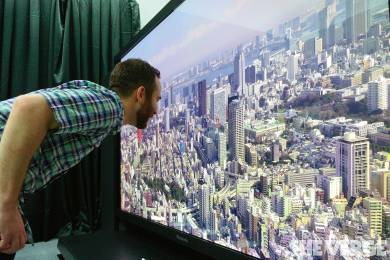