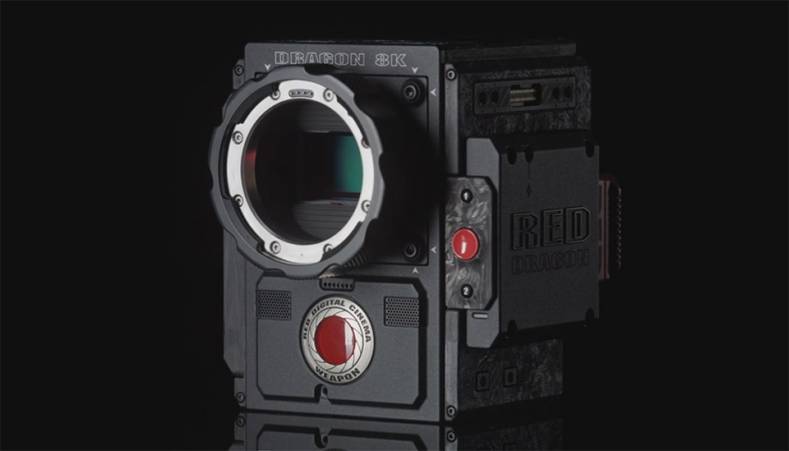 The camera’s internal processing “Brain” has been completely redesigned for modular performance.

The latest digital cinema camera from Red Digital Cinema is called the “weapon”, and for good reason. It features a new 8K (8192 x 4320 resolution) sensor, which reports say is slightly wider than a standard full-frame 35mm sensor (40.96mm x 21.6mm), providing better quality images than similar cameras on the market today. The company is offering different configurations of the Weapon, with different price points, depending upon features included.

This new 8K WEAPON can be an upgrade for existing Red Camera owners and is planned to ship at the end of the year.

The 8K Weapon is the newest member of the Red’s 6K Dragon family, combining a refined color science with the dynamic range of the 19 megapixel Red Dragon sensor. It also features on-board Redcode RAW and Apple ProRes recording (4444 XQ, 4444, 422 HQ, 422 and 422 LT) as well as 1D and 3D LUTs for precise color matching. It can shoot at a maximum frame rate of 75fps at 8K.

Available in a Magnesium or Carbon Fiber editions, the Weapon will be offered as both an upgrade for existing Red Epic and Scarlet customers as well as a new camera purchase. Customers who placed a deposit during the week of NAB qualified for special pricing incentives and were given the opportunity to pre-order Red's 8K Sensor Upgrade at a special rate. More information including tech specs, photos, and ordering options can be found here.

In 2006, Red Digital Cinema began a revolution with the 4K RED ONE digital camera. By 2008, the camera that changed cinema also began to change the world of stills. The same camera being used to shoot features like "The Hobbit" trilogy and "Gone Girl" - as well as the Emmy-winning "House of Cards" - was being used to shoot covers for magazines such as "Vogue". In 2014, Red began providing a broadcast solution allowing streaming of live 4K while recording 6K R3D RAW masters.