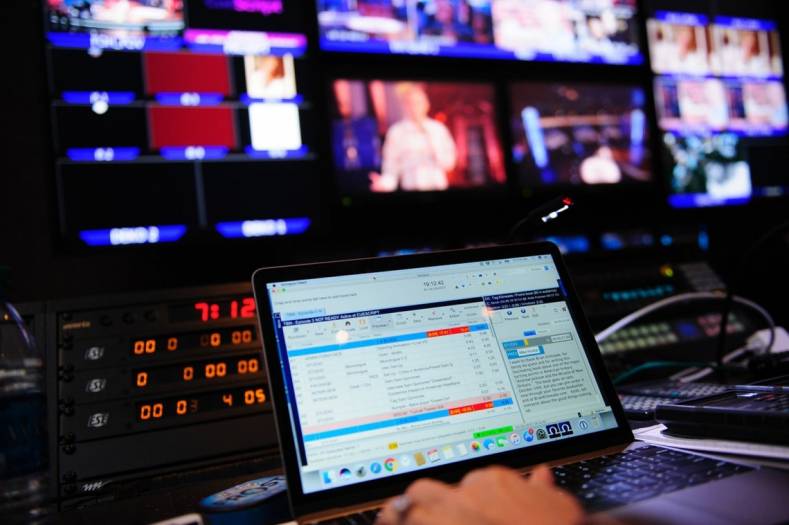 The Octopus 8 newsroom computer system will help streamline workflows in all facets of TBN’s production, both on TV and online.

Larry Haley, TBN’s Director of Broadcast Operations & Engineering, said that the challenge for his team was how to integrate a newsroom platform into a new show called “Huckabee” that features a wide variety of information and entertainment content. The team was particularly impressed by the modular configurability of the Octopus 8 software, its handling of rundown-based content compilation and its efficient control of social media content.

“[We liked] the ability to interface Octopus 8 seamlessly with our Ross Video graphics, IPV asset management, CueScript prompting and EVS playout infrastructure,” said Haley. “Plus the fact that Octopus 8 runs equally well on multiple operating platforms as we make intensive use of Apple Mac and mobile as well as PCs running Microsoft Windows.”

TBN engineers have integrated the Octopus 8 platform with a Ross Video graphics package to enhance the “Huckabee” show’s on-air look.

The new system will be used initially for TBN’s new show “Huckabee”, hosted by former governor and presidential candidate Mike Huckabee. After this initial implementation, the system will be rolled out to several of TBN's other major network production facilities across the country including network headquarters in Tustin, Calif. The new program will available in the USA and internationally via TBN's network of 37 US stations, national cable distribution and direct to home platforms such as DirecTV and Dish, as well as live streaming channels and on-demand via TBN's website.

Available for Apple OS X, Linux and Microsoft Windows operating systems, Octopus 8 gives newsroom staff the ability to ingest all incoming audio, video and still-image files, news agency wires, RSS feeds, emails, SMS messages and even faxes. All content relating to a specific task can be seen in a single view. Octopus 8 is fully MOS compliant and can be integrated into any environment or workflow that supports the MOS protocol. Octopus 8 can easily integrate with existing and new MOS devices. It fully supports the placeholder workflow, thumbnails and proxy preview, item status, channel assignments and many other commands.

And because it’s based on Unicode, Octopus Newsroom products support all major character sets including Chinese, Japanese, Korean, Thai, and Vietnamese.

With 30 networks and growing worldwide, Trinity Broadcasting Network is the world's largest faith-and-family television group, airing a broad range of church and ministry programming 24 hours a day to every inhabited continent via 87 satellites and 20,000 television and cable affiliates. In addition, TBN's most popular global networks are available on computers, smart phones, and other mobile devices, and over 22,000 hours of entertaining and inspiring On-Demand programming is accessible via TBN's innovative online network, iTBN.org.