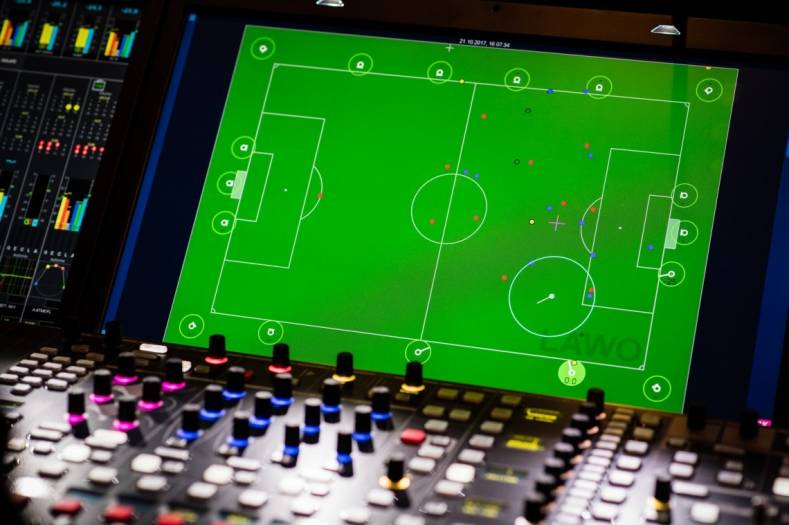 The German Bundesliga claims it is the first major sporting league to deploy automated audio mixing based on live tracking data.

Live tracking data on each player will now be used to set correct input levels for the microphones around the stadium that record action on the field. According to DFL this creates a much more realistic audio experience for viewers.

The system has been deployed by DFL’s subsidiary Sportcast after two years of development and testing. Sportcast worked with and coordinated two technology partners, one being Lawo for development of the Kick software which operates as an interface between the tracking data received and the digital mixing consoles used. Then ChyronHego is responsible for generating official Bundesliga match data as the input for the automated system.

A third key component is data quality monitoring and assurance, which is conducted by Sportcast subsidiary Sportec Solutions. Sportcast itself was founded in 2016 to develop innovative sports technology data and solutions relating to Bundesliga football and has been involved in all first and second tier Bundesliga matches since the beginning of the 2017/2018 season.

The main innovation lies in networked utilization of data as a basis for automatic audio mixing. This enables considerably better quality than manual audio mixing, according to Lawo. The Lawo Kick software uses tracking data, which is now standard practice in professional football but which until now has been used mainly just for match statistics and graphic analyses. This camera-based technology generates real-time data in the stadium allowing the exact position of the 22 players, referees and the ball to be tracked in real time.

This enables existing microphones to be used to determine positions of players on the field and their direction of movement. The system can then in turn work out which microphone can best capture what is happening on the field at a given time and automatically send the necessary commands to the mixing console.