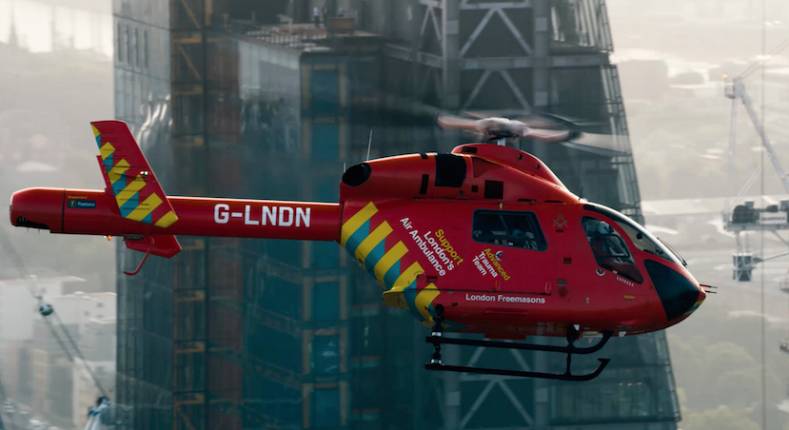 Phil Arntz is a veteran DP who specializes in aerials and has produced several renowned promotional films and documentaries. He recently took to the skies with an Atomos Sumo video recorder/monitor mounted inside two helicopters to shoot London’s most famous landmarks for London Air Ambulance, a charity organization that rescues ten critically injured people each day.

Working with Helicopter Film Services (HFS), Arntz shot the 30-second film air-to-air as he flew along shooting a London Air Ambulance team (a pilot, paramedic and co-pilot) in another helicopter as they helped rescue victims on rooftops and other hard to reach areas.

He took to the air in the HFS Twin Squirrel helicopter with a nose-mounted RED Helium 8K camera and Angenieux 25-250mm Cine zoom inside a Shotover F1 gimbal system. This facilitated the capture of super-stable, high-resolution imagery. Sitting in the back of the chopper, Arntz remotely controlled the camera setup using a control panel, checking all the critical settings and framing on an Atomos Sumo19M HDR production monitor.

“It’s essential to rig a large production monitor in the back of the helicopter so I can really see what I’m doing,” Arntz said. “At this level, critical focus and exposure is everything. The hard part is that once in the air you find yourself in a bright environment where the lighting conditions can change instantly. Previously I didn’t have a monitor with the brightness of the Sumo19M. The extra brightness and easy-to-use tools make it the perfect choice for this kind of work.” 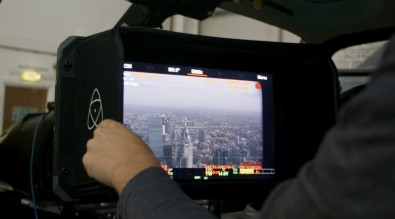 The Atomos Sumo’s AtomHDR function proved especially useful to monitor both SDR and HDR versions of the project.

Arntz’s clients are now asking him for separate SDR and HDR versions of the work, so he was happy to be able to use the Sumo to monitor footage in both display modes. As more and more features and commercials are shot this way, critical monitoring has become vital. The Sumo19M includes AtomHDR technology, designed for applications exactly like this.

“The AtomHDR function proved especially useful on this shoot because we needed both SDR and HDR grades done,” he said. “Being able to see and expose the HDR image correctly while shooting gave me the assurance that I needed.”

The DP isn’t the only person on-board who needs to see the image during the shoot: the pilot having a clear overview of what’s being filmed is just as important. In this case, the pilot had an Atomos Shogun Flame connected to the Sumo19M.

“Atomos recorders have the capability to route signals to other devices via SDI or HDMI, and even apply LUTs to send other monitors,” said Arntz. “It’s great to have high brightness on the Shogun Flame as well. We use these all the time for pilots and directors. We also use them to record proxy files for instant playback.”

Even though the Sumo19M includes a high brightness display, there are times when a sun hood is also useful; cutting glare and reflections to a minimum.

“The combination of image tools on the Atomos Sumo19M, combined with the really high brightness of the panel, make it a really good monitor for our line of work,” he said.