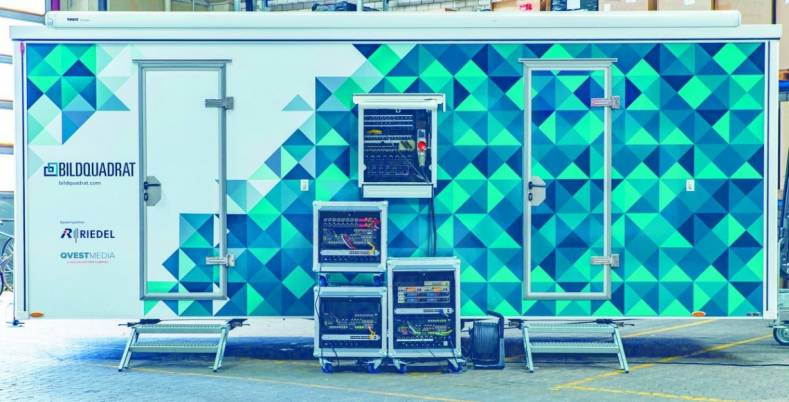 German web TV and live production facilities company BILDQUADRAT Videoproductions has added new intercom capability to its MP1-HD outside broadcast trailer. Described by the company as a compact OB van, this different approach to location facility design now features a Riedel Communications Artist digital matrix in addition to an upgrade of the existing MediorNet distribution infrastructure.

MP1-HD went on the road in 2015 based on a technical foundation of Riedel's MediorNet real-time network, MicroN 80G media distribution interface and a CompactPro stagebox. Video equipment includes a 24-input, 16-output 2M/E (or 6M/E in virtual mode) vision mixer and eight channel DVE with 12-channel keyer. It has capability for up to ten cameras, with eight Triax and two wireless connections.

Recording and playout facilities include two EVS XT3 or XT2 units or a Grass Valley K2 server, plus SSD and XDCAM recorders. The audio section accommodates a Lawo mc² 36 console with MADI and RockNet connectivity. Monitoring is on a Genelec 5.1 surround rig with loudness metering through a RTW TM9 working to the EBU R128 standard. Commentary can be provided using a Riedel CCP-1116 system for two commentators. 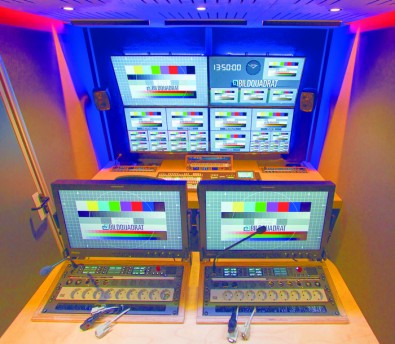 The MP1-HD is a 8.10 metre long, 2.53m wide trailer pulled by a Mercedes Sprinter van. The production area is based on a two-row concept. The vision gallery comprises five workstations, each with its own monitors. There is also an area for two image technicians, while the control room accommodates picture matching facilities and the Lawo mixer.

The MediorNet and MicroN combination run over a 10Gbp/s optical fibre network, producing a redundant, decentralised routing matrix. BILDQUADRAT has expanded this by building mobile stageboxes based on MediorNet frames to extend the reach of the signal processing in the system.

Since going on the road MP1-HD has been used for live sport and entertainment production by a number of European broadcasters. BILDQUADRAT has now upgraded the capabilities of the routing matrix by adding seven MicroN network units. One of these devices is assigned to the multiviewer system using MediaNet's dedicated app for the purpose.

On the comms side the trailer now features an Artist 64 mainframe intercom. This runs RSP-2318 Smartpanels, which incorporate both the AES67 interoperability and AVB networking standards for interfacing purposes. MADI client cards are also available to connect the Artist 64 and the Lawo console. The FiFace G2 universal radio interface is used to link the Artist intercom with walkie-talkie mobile comms units.

Commenting on the new installation, BILDQUADRAT co-founder Niklas Windeck said, "We built the truck from the ground up as a showcase for file-based workflows, and our partnership with Riedel means we can continue to support our customers in their ongoing migration to IP operations."