Drone developer DJI has released the Inspire 1 which incorporates a 4K video camera and is described by DoP Philip Bloom as “the world’s most advanced all in one aerial filmmaking system.”

The £2,200 ($3399) quadcopter integrates DJI’s wireless HD transmitter, Lightbridge, and comes with a redesigned mobile app that streams HD 1080p video to iOS and Android devices at a distance of 1.7km.

A new remote controller features dedicated controls for the shutter and camera settings. An optional second controller allows one person to pilot the UAV and a second to concentrate on camera position and settings. 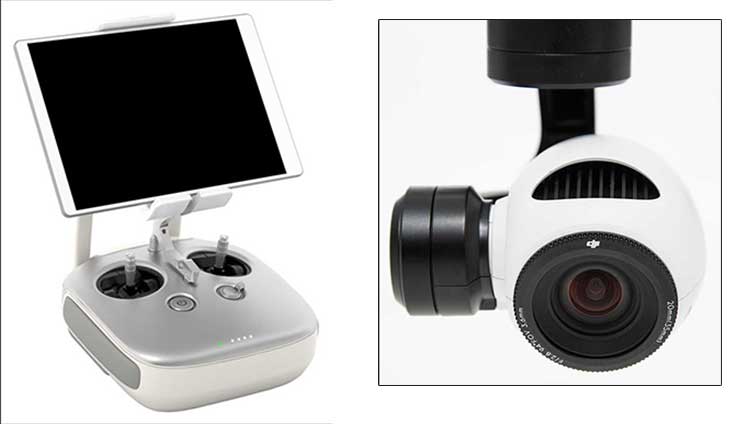 Inspire 1 Remote controller and the Sony 2/3in camera (inset)

On take-off the unit's four carbon fibre arms lift up into a 'V' to allow the camera an unrestricted view.

During flight, the platform stabilizes itself using downward facing sensors that take a stereoscopic image of the ground allowing the drone to fly indoors and hover stably at low altitudes even without a GPS signal. These sensors determine the drone's location and altitude and lower the legs automatically when landing. There is also 'homing beacon'.

The camera incorporates a 2/3-inch Sony Exmor CMOS and will record 4K video at 24, 25 or 30fps or HD up to 60fps. 12 Megapixel stills are snapped in jpeg or in RAW. The 20mm lens captures a 94-degree wide angle and the camera can rotate 360-degrees on a 3-axis rotating gimbal. It can also pan up and down, and side to side at 125 degrees.

In a promotional video for the product Bloom noted that the camera is detachable allowing flexibility for future upgrades.