An Introduction to Avid Media Composer | First - Part 1 covered: window and toolbar set up, creating a Project, media input, and creating a Sequence. These are fundamental editing tasks to master. Now, we’ll look at tasks that are used to complete a project.

By default, Composer's Trim Tool window will open in A-B mode where the cut-point can be non-ripple trimmed earlier or later. (Figure 1.) To ripple trim only one of the clips at the cut-point, click the Trim window’s A-side or B-side button. Trim using the window’s or keyboard’s left- and right-arrows—or dynamically using the keyboard’s JKL keys. 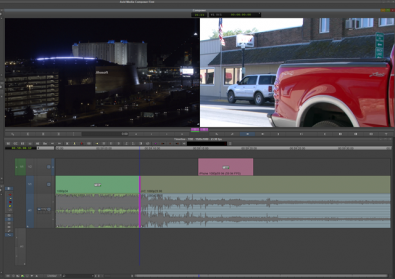 Figure 1: Trim Tool's window where the cut-point can be non-ripple trimmed earlier or later. Figure 2: B-side Trim mode—64-frames removed from the beginning of the second clip. Figure 3: The Quick Transition window provides extensive control for a set of transitions. 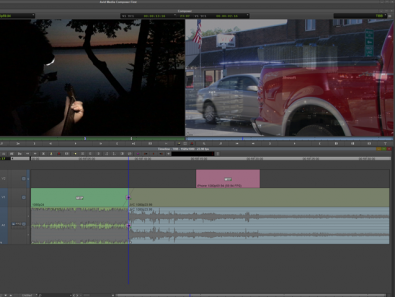 Figure 4: A transition has been added between the first and second clips.

Deselect all Record tracks by clicking the Toolbar DT/De button. After selecting only the desired video track. Click the Toolbar Color Correction (CC) Workspace button. Now, click the Next label in the right monitor to select the type of scope you want to view. (Figure 5.)

Unfortunately, First doesn’t have Media Composer’s YRGB Curves panel that has several powerful color grading tools. When playing video the scopes do not update in realtime. Moreover, many color grading functions are not present. First does support a Look Up Table which could be a Log-to-709 LUT or a LUT that creates a “look.”

Select the purple tab on the Project window. (Figure 6.) 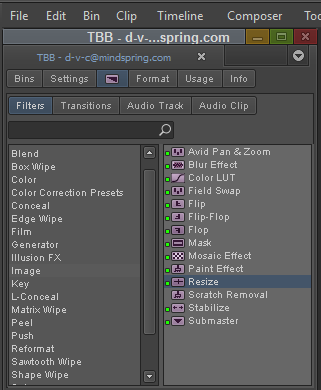 Figure 6: The Resize filter is selected from the Filters tab.

Drag a Filter/Transition/Audio Track/Audio Clip FX onto a clip. The Edit Effects panel will auto-open as shown in Figure 7. Figure 8 shows a Resize effect applied. 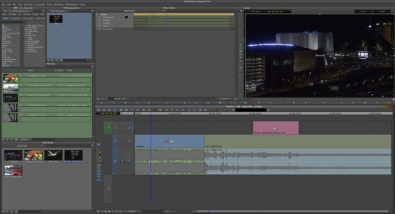 To make an adjustment to an effect, place the cursor over the effect in the Timeline. Click the Toolbar Edit Effects (EE) Workspace button which also initiates Edit Mode. (Figure 9.) 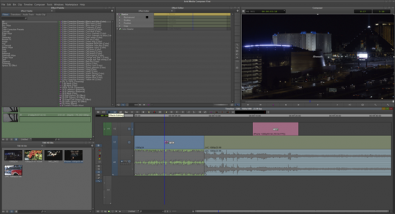 To rubberband audio levels, click the Toolbar DT/De button and then select the desired audio track(s).Place the Position Indicator at the time you want to alter the audio level. You can drag the point louder or softer. See Figure 10.

To EQ a clip, to use the AudioSuite plug-in tool, or use the audio mixer—click the Toolbar Edit Audio (AE) Workspace button. (Figure 11.) 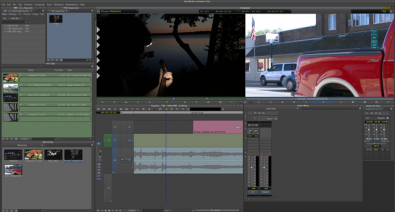 In the Timeline, Mark-in and Mark-out for title placement. Click the Record monitor’s T button to open the Title Application. (Figure 12.) 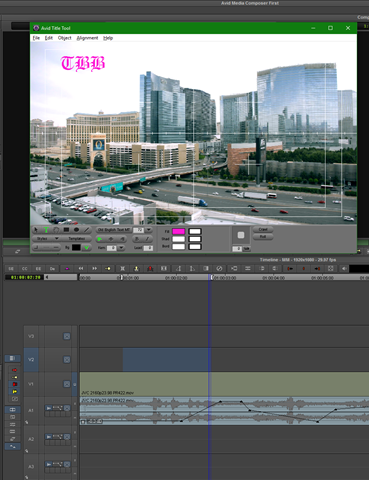 When finished creating a title, click the application’s File > Save Title as…, name it, select a Bin, select the render drive, select the format, choose the In-to-Out option, select Topmost or V2 track, click Save, and Exit. Once in a Timeline, a title can be trimmed. Toolbar Quick Fade-in and Toolbar Quick Fade-out effects can also be applied. To modify a title, Control+double-click a title icon in a Bin.

Right-click a Sequence in the Project window and select Publish To. Then select where you want to export your movie. I usually select Local Drive… which opens the Publish window. (Figure 13.) To transcode DNxHD to the more widely used ProRes 422 codec with 48kHz PCM audio or simply convert 44.1kHz to 48kHz audio, you can use myffmpeg from OSBytes.

H.264 exports can be made using the Fastest, Better, or Best options. See Figure 15. Despite Media Composer’s well known steep learning curve, this tutorial demonstrates how easy editing can be with First. And, not because Avid removed resources from First—most all Media Composer’s hundreds of powerful capabilities remain.

Only one film on the British Film Institute’s Sight and Sound’s list of the 50 greatest films, was created after 1994. The remainder likely were edited on a flatbed such as a Steenbeck.  By consciously limiting Media Composer | First’s editing capabilities to roughly those available to these great filmmakers, First becomes both easy to learn and use. And, unless you produce 4K (4096x2160), UHD (3840x2160), or 2K (2048x1080) media, you may have no need to upgrade. Of course, nothing prevents you from learning additional Composer functions to become a more efficient editor.