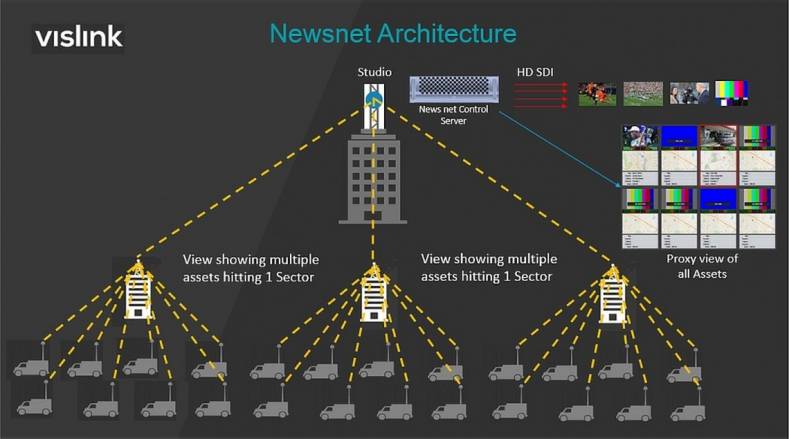 The IMT and Vislink business units of xG Technology will jointly showcase ia new IP-based ecosystem for ENG use called “newsnet.” The system will be shown at the NAB NY 29017 show.

Engineers at Vislink have leveraged its history in the wireless capture, delivery and management of high-quality live video to develop newsnet as a way of completely transforming traditional ENG workflows. It incorporates a high-speed, bi-directional IP network that utilizes the 2GHz BAS-licensed spectrum, thereby increasing the number of live ENG transmissions and workflows that can be performed from the field.

The newsnet system consists of one or more mobile high-speed IP network nodes that easily connect with a base station, typically located at existing ENG receive sites. Each mobile node not only offers high-quality video transmission capability, but also a private and reliable ingress point for other IP-centric edge devices—allowing users to control their own private high-speed IP licensed wireless network and ensuring that their content and intellectual property are never at risk. 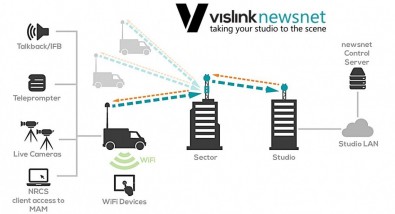 Newsnet allows for multiple access points to operate simultaneously on the same BAS channel, all while enabling a high bandwidth IP connection with the newsroom computer system.

“As ENG becomes more reliant on the Internet, broadcasters must depend heavily on unsecured broadband infrastructures as the main corridor connecting field and studio,” Payne said. “We have implemented newsnet within select prominent broadcast stations and have seen superb results thus far.”

With a user interface that is accessible to many skill levels, newsnet allows for multiple access points to operate simultaneously on the same BAS channel, all while enabling a high bandwidth IP connection with the newsroom computer system (NRCS). This IP connection can further be leveraged to enhance news production values through high-speed file sharing, as well as enabling all other IP-centric tools in remote locations, phone systems, Closed Captioning, automation and remote asset management. Newsnet is compatible with MOS protocol-based news automation systems such as Ross, Octopus, Dalet and Video Inception.

Other broadcast products being presented at NAB NY include the HCAMHEVC 4K UHD camera transmitter, IMTDragonFly, microLite and INCAM-G transmitters, as well as the UltraReceiver and DR3 receivers.