A live holographic video image of a performing musician has been projected into a series of staged concerts produced by students at Nashville’s Contemporary Music Center. It is thought to be the first interactive use of a live performing artist’s hologram in a series of public performances.

Warren Pettit, a director and educator at the Contemporary Music Center inNashville, designed the hologram scheme for his 36 college-age students as a concert project for the four-month course of study. The concert series was a “final exam” and consisted of a weeklong, multi-state tour which was planned, performed and technically executed entirely by the students. 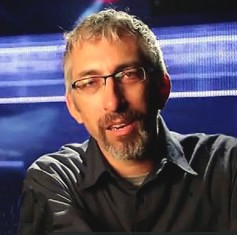 In contrast, Pettit wanted to use a live performing artist who interacted with the remote audience in a series of concert performances. Two locations were rigged 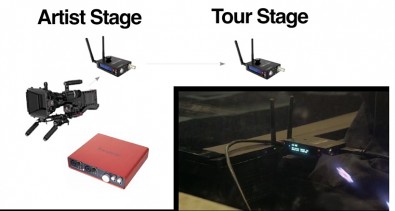 Two Teradek links were used to interconnect the live stage and the remote concert audience. 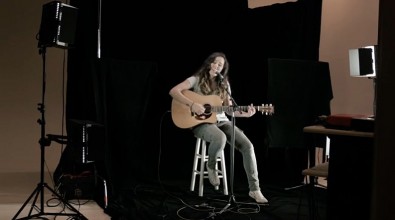 An artist performs in front of a black screen and behind a sheet of transparent, reflective film. See below.

The artist worked in front of a totally black background and was shot with a Canon DSLR camera. At the tour stage on the receiving end, an 80-inch Sharp LED television set lay flat on the stage and projected the artist’s remote image upward against a sheet of clear polyester film that hung at a 45-degree angle.

The reflective film acts much like a teleprompter mirror.

The sheet of film is transparent and highly reflective. An infrared camera was mounted on the tour stage to send a real-time image of the audience back to the artist in Nashville.

Infrared camera located on the stage edge allowed the performed to view the audience in real time.

The technology, said Pettit, works in a similar way to a teleprompter. “The image is slightly magnified since it is going up about eight feet onto the stretched film material,” he said. “A physicist would insist this is not a hologram. But popular media has termed it a ‘hologram’ for this type of effect. It’s actually a cross between a green screen and computer video in that there’s a depth perception to it because no one in the audience sees the background.”

That’s because the only viewing angle of the effect is from the audience, who sits in front of the holographic video. If one goes behind the image, the effect disappears. It’s unlike a genuine hologram, which is visible from all sides.

“What is unique about our set-up is it’s about a musical artist who is still alive. It’s also not a one-of performance — it’s five nights in a row and it’s interactive,” said Pettit. “We didn’t tell the audience how we did it. It was an illusion. The live audience, when the effect came on, was kind of stunned. As soon as the artist appeared, 200 cellphones went up in the air. What appeared on stage had depth and was three-dimensional. You could hear the performer interact with the live band on the stage. The audience was thrilled — which is the end game.”

Jon Landsman, v.p. of sales at Teradek, was delighted by the school’s use of the Cube. “What they are doing with the Cube is very cool,” he said. “I pitched it to a politician who could do a presentation in one place and it could be seen in an unlimited number of places as a hologram. So it would look like a three-dimensional human being standing there.”

The eight-ounce Teradek Cube, Landsman said, has been very popular since its release more than four years ago. The units can be purchased with a variety of inputs and outputs, including HD/SDI, HDMI, composite, Ethernet and Wi-Fi. The units feature a wide choice of protocols.

The two-way video feeds were handled by Teradek Cubes, a compact H.264 video encoder/decoder. A pair of which can stream live HD video directly point-to-point over the Internet.

“The Cube encodes up to 10 megabits per second and uses H.264,” he said. “It can do a number of things on the output. It’s very flexible and has a multitude of uses. We’ve sold about 14,000 of these little puppies over the last few years.

“I have Cubes at every NFL and MLB stadium. NBC uses them for point-to-point communications over the public Internet. They’ve been used as backup for satellite feeds at the Olympics. TV stations use the Cube to send feeds back to stations over IP rather than use bigger, expensive encoders. The satellite truck for the NBC affiliate in Denver lost lip sync and they switched over to a Cube. No one ever noticed,” Landsman said.

Cubes are widely used in television and cinema production, he said, to stream live video to Apple iPads. “On NBC’s The Voice, they use the Cube to stream to iPads for talent, stars and for the show runners.”

Teradek, he said, has also created an IP-based video router in the cloud. “So I can take a Cube encoder from New York and route it to one or more Cube decoders anywhere in the world — all via our own software-based router,” he said.

As for the students at the Contemporary Music Center, their experiment broke new ground in live concert entertainment. The performances, called the CMC Holo Tour, ran through Nov. 25 and were considered a success by audiences. Others, in all forms of public speaking and performance applications, watched the experiment closely.