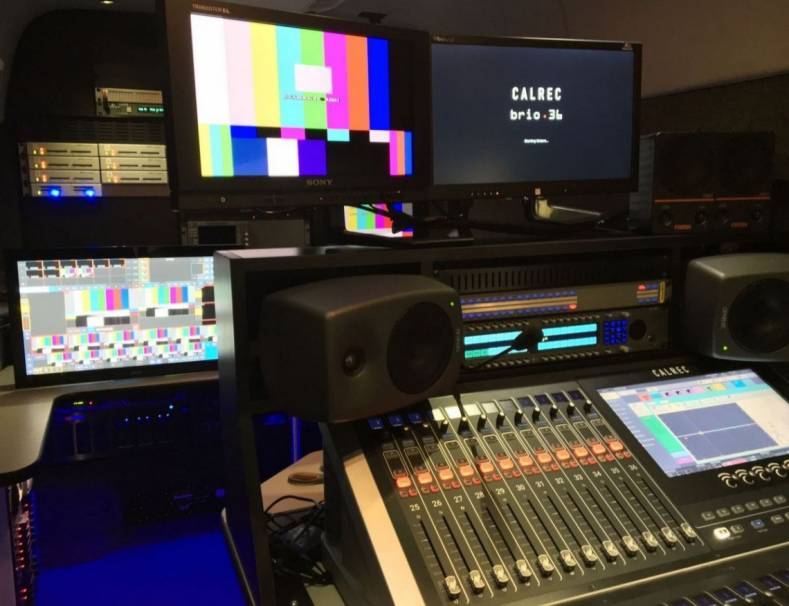 Gearhouse Broadcast used the first day of IBC 2017 to launch a brand new small-scale outside broadcast vehicle. The Skye production unit is based on a Mercedes Sprinter van and was designed to meet the growing demand for smaller location units that can be controlled through a remote network.

The six-camera Skye mobile is aimed at the North America market, where Gearhouse Broadcast is seeing a trend for projects involving fewer cameras but requiring the capability of a big truck in a smaller package. The basis of Skye is a Simplylive ViBox all-in-one production system. This provides core features including video mixing, storage, replays and graphics.

The ViBox comes with six Hitachi cameras and two robotic cameras. It is controlled through a touch screen and housed in a 4RU chassis. Also included is a Telex intercom system. The ViBox can be run over a remote production network for recording and streaming.

Although the ViBox does offer audio mixing and embedding features, Skye is also equipped with a Calrec Audio Brio console. Designed for remote production, the Brio features options for MADI and Calrec's own Hydra networking. It is connected to a DirectOut Technologies M.1K2 MADI router and works in conjunction with a Lance Design commentary system, which is Dante capable.

Communications for the audio section are handled though a RTS ADAM-M, the manufacturer's mid-sized matrix intercom. This comprises four AIO-16 port analogue I/O cards, a RVON-16 voice over IP card and a MADI-16 Plus card. Also included are six TIF-2000 telephone interfaces and multiple belt packs.

Despite its small size, Skye has been designed to include four distinct operational positions for audio and vision control, engineering and the director.

Kevin Moorhouse, chief operating officer of Gearhouse Broadcast, comments that major broadcasters in North America are now adding smaller OB vehicles to their fleets. These include ESPN, which refers to the units as 'REMIs', and Fox Sports, which calls them 'At Home'. He explains that in some cases these mobiles can be connected to the master control room over Ethernet, from where cameras can be switched remotely.

"Having successfully run numerous remote productions, we've combined our extensive research and findings to design, integrate and build a flexible mobile unit for this application," Moorhouse comments. "Because it can also be deployed for smaller six-camera productions, Skye is advantageous in terms of resources, budget and operational efficiencies."