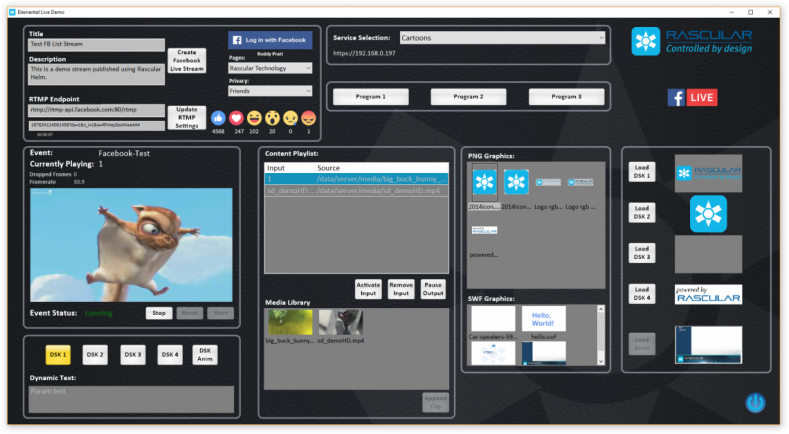 Rascular showcased its latest control and monitoring technologies at IBC 2017. The solutions provide flexible and cost-effective control of third-party devices across the playout chain, including streaming encoders.

Rascular is highlighting its flagship control technology, Helm, which has the ability to provide direct control of streaming content to Facebook Live. This can be achieved via Helm on a PC or via associated, device-independent web panels, allowing a tight integration for broadcasters and playout providers between broadcast devices and streaming content.

Operators can quickly and easily control both the streaming encoder and Facebook Live from a single screen, while Helm communicates with Facebook using the latter’s Graph API. Because Helm supports all the Graph API features, an incredibly wide range of applications is possible, both for delivering content – including of course live video – and monitoring the audience for that content.

Providing the flexibility required in modern broadcast facilities, Rascular demonstrated  its new web panel capabilities at IBC 2017. The panels allow for a tight integration with live broadcasting to social media (e.g. Facebook Live), and can be used in all modern browsers on mobile and desktop platforms, facilitating the remote control of services and equipment for pop-up and OTT channels. They are ideal for integration with cloud-based encoding technologies. For existing Helm users, already created panel designs can be easily converted to Web Panels, even using Helm’s familiar drag and drop designer which allows the easy creation of new panels to the user’s specification.